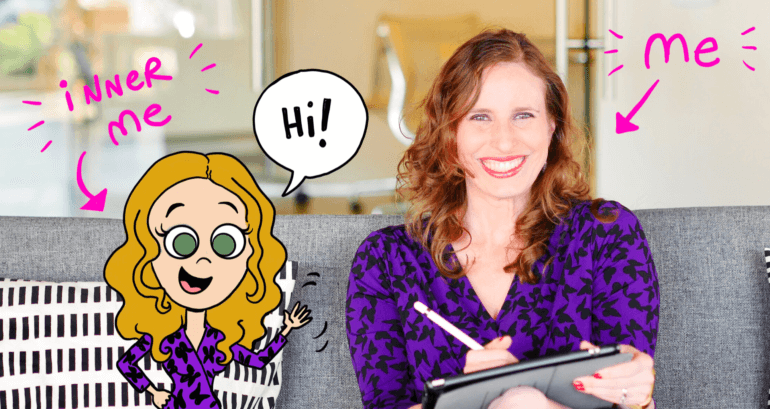 While comics tend to be humorous quips, Chari Pere, an Orthodox Jewish illustrator and comic strip creator elevates the humor by incorporating meaningful topics into her work. Pere started drawing when she was eighteen months old and attended art camp by six. From a young age, Pere wanted to positively represent Judaism. She only wore skirts in art camp, and she loved explaining her family traditions and the intricacies of kosher to the other campers. While Pere went to Yeshiva Flatbush for 12 years, she says “she felt the most Jewish in camp.”

Pere knew she wanted to be an artist after her father gave her a Calvin and Hobbes comic as a present. The comic reshaped her beliefs regarding the art form because it incorporated “childlike wonder” and “intellectual and philosophical” elements. It was the first time Pere saw a comic that blended humor and insight, and it spoke to her.

With a degree in cartooning from the School of Visual Arts in Manhattan, Pere hoped to work as  a cartoonist for a newspaper publisher. While she created content for The Washington Post’s The Lily and Mad Magazine, the invention of the iPhone revolutionized how people receive their news. So Pere turned her attention towards storyboarding ads and commercials for different companies, including Red Bull, Bud Light, Jockey, Wise, Comedy Central, and Purina. She has also worked with Disney, Kim Kardashian: Hollywood, and LingoKids. Today she is the Jr. Creative Director at Consumer Acquisition.

Reflecting on her time in the professional world, Pere has only encountered positive reactions regarding  her religious affiliation from her co-workers. They are always eager to learn more about Judaism and love being her ‘Shabbos goy.’ She also invites her friends for Friday night dinners to experience Shabbat with her family.

Just a few years into her career, Pere collaborated with Inbal Fruend, a leader in Jewish social activism, to create “Unmasked: The Story of Ariella Dadon.” It’s a comic based on a woman’s experience as an agunah (a chained woman) whose husband refused to give her a get (formal Jewish divorce document) for ten years. It was released on International Agunah Day.

Unmasked was Pere’s first piece that went viral, and it reached many people who were unaware of the issue. She recognized the impact that the comic had on others, and Pere says it elevated her “art, drawing, and goals to a whole new purpose.”

Realizing she can “make an impact” with her art, Pere started to focus on serious topics through the lighthearted medium of comics. When Pere suffered from a miscarriage in 2014, she could not find resources to help her get through this troubling time. She took matters into her own  hands and created a 10-page comic that illustrated her own experience. It resonated with many other women who went through similar difficulties, and she still receives emails from readers  thanking her for sharing her story. Pere has also written about her struggles with postpartum depression, and she has dedicated her work to other issues like down syndrome and bullying.

Most recently, Pere launched Corona Mama, which is a comic series focusing on stressful parenting situations that have occurred during the pandemic. In the beginning of COVID-19, Pere lost loved ones and her job, but she says that “everything happens for a reason,” so she shared her tough experiences to help others. Her comics delved into a variety of corona-related topics, like dealing with zoom school, quarantine, and her renewed love for junk food. She originally started the series as a therapeutic outlet but hoped that they resonated with others who were also struggling during this unique time. Pere wanted parents to know that they are not alone, and strength can be found in shared comfort.

Lastly, Pere mentions that “she brings the warmth and love she feels as an Orthodox Jew into her comics to create work that is clean and friendly for all ages.” To that end, she recently published this parsha coloring book