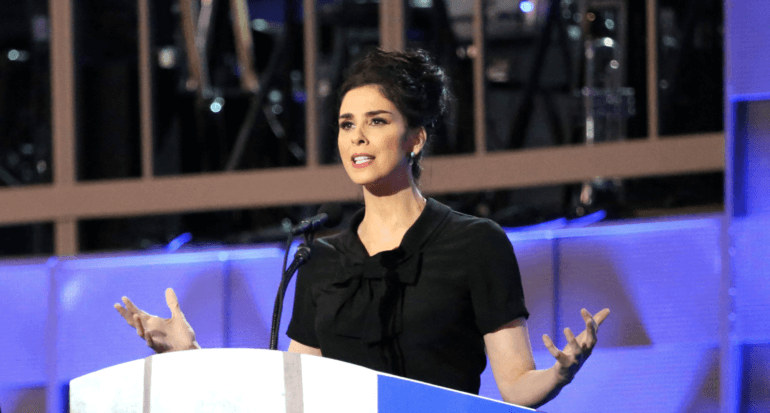 Hollywood Does Have a Jewface Problem, But It’s Broader Than Sarah Silverman’s Definition

In June, Variety features editor, Malina Saval, penned an important article: Too Jewish For Hollywood: As Antisemitism Soars, Hollywood Should Address Its Enduring Hypocrisy In Hyperbolic Caricatures of Jews where she discusses how Jewish parts in movies are often played by gentiles, as Jews are considered too unappealing to be on screen. Additionally, Saval notes that if a part is played by a Jew, the character has to be nebbish or self-hating in some way. She argues that this constant mocking of Jews and our heritage could be contributing to the rising antisemitism.

Writer Sarah Seltzer recently published a similar article for Time magazine, with an update that Joan Rivers’s part for an upcoming series was given to non-Jewish actress, Kathryn Hahn. This led comedian Sarah Silverman to comment on the phenomenon of “Jewface” on her podcast last week. According to Silverman, Jewface is casting non-Jews for Jewish parts and dressing them, their mannerisms and behaviors up in a “Jewish” way.

Since Jews are not just a religion, we are also an ethnicity and a culture, Silverman may have a point. As these conversations are being explored for every other minority, if Jewish features are considered too disgusting for the big screen or Jewish characters can only be shown when they’re being mocked, there is no reason why the Jewish community shouldn’t also be included in this dialogue. (I’m not saying where it should end, but if it’s happening elsewhere, Jews should be part of it too.)

All that aside, there is a different kind of Jewface that was recently brought to my attention that is much more troubling, as it involves the most targeted of Jews in the world – Orthodox Jews. As much as secular Jews are derided and reviled by antisemites, Orthodox Jews, are derided in polite company by educated and otherwise open-minded people. They are regularly verbally assaulted, attacked on the street and in the media. Additionally, the history of this Jewface is a dark one, literally beginning with minstrels in Eastern Europe and later involving Nazis.

Most people are familiar with blackface, which appeared in U.S. minstrels in the mid-nineteenth century where white people would dress up as black people to depict them as dim-witted and foolish. Only ten years after the minstrels in the U.S. popularized blackface, Jewface began in Romania.

“One famous story from the 1860s tells of the “enlightened” Jewish performer Israel Grodner, who took to the stage during a performance in Romania to recite a Yiddish poem. The poem was a serious critique of Hasidism intended to be delivered in the “European” style of top hat and tails. Instead, Grodner decided at the last minute — “lightning fast,” according to one observer — to dress in a long caftan, shtreimel and faux payot, using comically exaggerated gestures as he recited a scathing critique of Hasidic Jews. The audience’s delight signaled a desire to laugh at the Hasid and not just deride him.”

This genre was performed again and again in Yiddish theater for decades, with the goal of othering religious Jews and mocking their way of life. Then in 1940, the Nazis performed their own version of Jewface in the Nazi documentary, “The Eternal Jew,” to show how Jews could hide out among Aryans, but discerning people could still spot them in a crowd.

While Hollywood execs and celebrities have had a reckoning in recent years, confronting the sloppy and offensive way they often depict minorities, and finally and thankfully putting an end to the revulsive blackface, this reckoning has skipped the Jewish community. (Hasidic) Jewface continues to be employed, with all the mockery and judgment it has always had and, well, secular Jewface not doing too much better. See this post for examples of celebrities dressing up in Jewface. 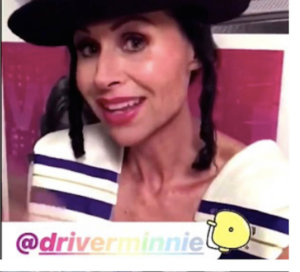 Other minorities are now mostly playing their own parts, like in the recently released “Naked Singularity,” the casting call for the “African American woman with large hips” character read: “Ethnicity: Black/African Descent.” 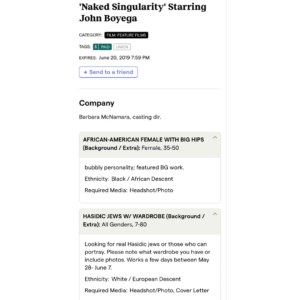 However, when it came to Hasidic parts for the same movie (the Hasidim were featured in the film as money-counting drug dealers), the casting call read: “Looking for real Hasidic Jews or those who can portray.” Long caftan, shtreimel and faux payot apparently can continue to be put on just anyone to produce a “Jew.”

While it is possible to lovingly and authentically use secular Jews or non-Jews to create religious Jewish characters in movies like “Fill the Void” and shows like “Shtisel,” it’s because Orthodox Jews were involved in the writing, producing and advising of the productions. Without the involvement of Orthodox Jews in telling our own stories, we are back to the humiliating minstrel-style Jewface Jews. Aren’t we supposed to be doing better by now?

The ADL recently reported that 59% of attacks on religious minorities in 2020 were towards Jews, despite Jews only making up 2% of the US population. Orthodox Jews make up .2% of the U.S. population. And yet, the vast majority of the attacks are on this community, which doesn’t even account for the tremendous amount of underreporting that occurs because most charedi Jews are not in touch with the ADL.

The world is actively discussing minority representation. The Jewish community, including the Orthodox Jewish community needs to be part of this conversation. We need to be the ones to tell our stories. And anyone who actually cares about equality should stand up for us.

Jews Are Not "White" And We're Not "Just a Religion"

I Was Exposed to Every Religion But Judaism, Then I Became An Orthodox Jew