This Ultra-Orthodox Assistant Principal Touched Her Students’ Lives, Then One Was Tragically Killed

While Raizy Silberstein Greenbaum was raised in a black hat Orthodox Jewish community, her career took her to Broonklyn’s Black community where she had the privilege of connecting with and impacting hundreds of children. Today she is an assistant principal at Erasmus Hall. Born in Lakewood, New Jersey, “living a very enclosed life,” Greenbaum attended Bais Yaakov schools in Boro Park and Flatbush.  She went to Touro to study math and planned to become an actuary, but after a tutoring job lit her spark for teaching, she transferred to Brooklyn College for degrees in education and math. 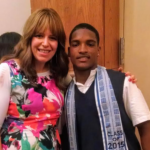 While she loved teaching, she initially viewed it as a backup plan to being a stay-at-home mother, “but Hashem had other plans.” She worked in both in the yeshiva world and the public school world, but ultimately gravitated towards public school. Her first public school job landed her in Prospect Heights when she was 23 years old. At the time, Mayor Michael Bloomberg had started dividing up large high schools in order to improve the quality of the education offered. “When I started [the school was about 90-92% African American, with 80-85% students coming from economically disadvantaged homes.” Learning about a new community was a big transition and a shock at first. “There were a lot of things happening outside the building that I wasn’t used to…and that took some time to get used to.” But Greenbaum was soon at ease as she developed relationships with the students.

They were respectfully and politely curious about her background, asking her questions when they wanted to understand more about religious Judaism. “I’m a very ethical and fair person and I’m also very consistent, so that was something that the students appreciated.” This kiddush Hashem made an impression beyond what they thought of her. “That made them think highly of Jewish people. I am a practicing Jew so that [put] Jewish people in a higher esteem in their eyes.” She remains close with her former students, including a group from 18 years ago that recently surprised her with a sit-down lunch at a nice kosher restaurant in honor of her recent birthday. 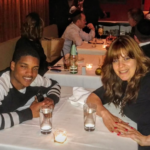 When her twins were born, Greenbaum took a brief leave of absence and ended up at a school known as YCD. Soon after, she met football-playing student Keon Gravenhise. “He sat at the back of the class and I could tell that he was struggling but he wanted to do well. He had a beautiful soul, and he wanted to succeed in life.” Over the course of the year, they built a rapport. He was always respectful but wasn’t afraid to call her out when needed. Once, as Greenbaum was moving around the classroom, her skirt moved from its original position. Gravenhise politely inquired, “Miss, is your skirt supposed to cover your knee?” She appreciated his candor and admired how hard he tried.

As Gravenhise went on into 10th and 11th grade, his academics and emotional well-being continued to improve. He became captain of the football team. But when he was a rising senior, his older brother was shot and killed and another brother was arrested. Greenbaum saw that he had the potential to graduate but needed more intense faculty support. She worked alongside the head football coach to make sure that the students had all they needed: academically, socially and emotionally. Her relationship with Gravenhise continued to grow. “We were very close at [his] graduation. He really persevered. I encouraged him, but he really put his foot on the gas. As a result, he graduated on time, which was a huge accomplishment.” At the graduation, Greenbaum was asked to speak to the students and Gravenhise had the honor of introducing her as “his second mom.” Greenbaum’s pride was palpable. “He played a big role in mentoring students who were younger than him. They really respected him. He had a certain knowledge about life and the world and they respected what he told them.” Beyond his mentoring, Gravenhise grew into a person to be admired with the choices he made, despite his circumstances. “He was a role model. He really truly cared about people being successful. He wanted to live an ethical life.” 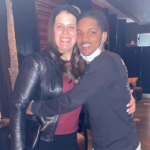 Gravenhise got a job at the post office and worked for them six days a week. They would face time every 2-3 weeks and he was always smiling. “Everything that he went through, he never let it get him down. he was just such a positive person and such a caring person.” Every year for his birthday, Greenbaum would take Gravenhise out to eat at a kosher restaurant. This year, she took him to Manhattan’s well-known steakhouse Reserve Cut, though for some reason, they booked it a little earlier than his actual birthday. It ended up being the night before he was shot and killed at just 24 years old.  “He was and will continue to be a lifetime blessing.” They were usually out for two hours but this time they were there for four hours. “He always thanked me for who I am in his life and what I’ve done for him. He always told me that he wouldn’t have been able to have accomplished what he had in life…without my help and my support.” When he said to her, “‘One day, I’m going to pay you back,’ I said he already had, by just seeing him living a beautiful life, an ethical life, applying [him]self…that’s the biggest payment.” Having the relationship that they did and “seeing his growth and development,” is so meaningful to Greenbaum. She is grateful to God that they were able to have the relationship that they did. “It was almost 10 years that I was able to be a part of his life and it was definitely a beautiful thing.”

“We shared a special, unbreakable bond. Keon changed the trajectory of our school’s social and emotional support center for the better. As a result, hundreds of individuals had and continue to have access to mental health support because of him…His courage was contagious. Keon lived an ethical life, working as a postal worker 6 days a week, 12 hours a day with a smile plastered on his face… His perseverance, his loyalty his spectacular soul-spirit defined him. He was a person of strong values, faith, family, and friends. Those who were blessed to cross his path felt positive vibes radiating from his soul. Those who were blessed to know Keon and be loved by him will forever have a hole in their heart.” 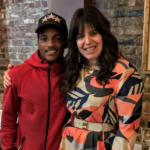 Greenbaum is clear that Torah teaches us how we are meant to interact with humankind. “The Lubavitcher Rebbe said, ‘Every person is a creation of Hashem…’ That’s always been my mentality. Every person has a neshama, was brought into this world by Hashem for a specific reason and deserves to be treated with the same amount of respect.” She truly showed that to Gravenhise and continues to show it to all of her students. “Sometimes we are placed in people’s lives to be able to encourage them and guide them so that they can fulfill their purpose in this world. That might be part of our purpose as well.”