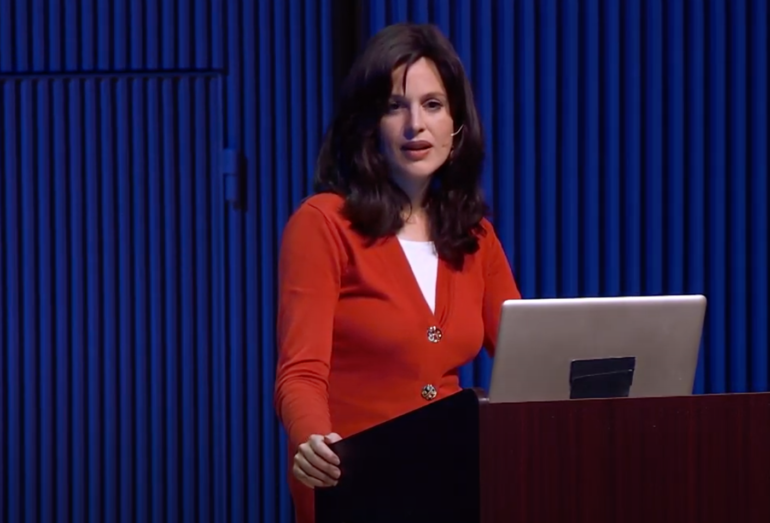 Jew in the City’s Orthodox Jewish All Star and former board member Chani (Anne) Neuberger has served at the NSA for more than a decade and has been the head of its Cybersecurity Directorate since 2019. Yesterday, Neuberger was named Deputy National Security Adviser for Cybersecurity on the National Security Council by President-Elect Biden as reported by Politico. Below, you can watch her interview at Jew in the City’s 2nd All Star Awards in 2013. (Neuberger’s interview begins at 7:29.)

The grandchild of Holocaust survivors from Hungary (7 out of her 8 great-grandparents were murdered by Nazis), Neuberger, a 44 year-old mother of two grew up in a heimish, Yiddish-speaking home in Borough Park. Her parents were on the “Raid on Entebbe Flight,” the Air France flight in 1976 that was hijacked and then rescued by Israeli commandos in Operation Thunderbolt from Uganda’s Entebbe Airport.

Neuberger attended Bais Yaakov (a charedi all girl school) in Borough Park and then Touro College, where she studied finance and computer science. She went on to get a Masters of Business Administration and Masters of International Affairs from Columbia University.

After the terror attacks on 9/11, Neuberger was inspired to serve her country. She applied and received a prestigious White House Fellowship and was the first woman to be assigned to the Department of Defense. Then, a year later, she was appointed special assistant to the secretary of the Navy. From there, she climbed the ranks.

Later on in her career, at the Pentagon, she was tasked with planning the U.S. military’s Cyber Command to protect military networks. After that she was promoted as the special assistant to the director of the NSA. Then, in 2014, she was named the Chief Risk Officer at the NSA. After that, she was appointed Assistant Deputy Director of Operations, where she served on NSA’s Board of Directors. In 2018, she was appointed to co-lead the Elections Security Group and in 2019 she was made head of the Cybersecurity Directorate, making her one of the highest ranking women in the NSA.

As a proud Orthodox Jewish woman, Neuberger is one of the highest ranking religious Jewish woman in government and has had to balance Shabbos, holidays, and kashrus with her professional life. Her faith and family history propels her to make a meaningful impact on the world. She told NPR, “There was a deep sense among my grandparents that their parents had been killed for their faith, and they had an obligation to bring up a generation [for whom] that faith and that tradition was meaningful — and to recreate it in these kids who were proving that Hitler had not been successful at eradicating this commitment to faith.”

Neuberger is also the founder of a nonprofit organization, Sister to Sister, that serves divorced mothers in the Orthodox Jewish community.