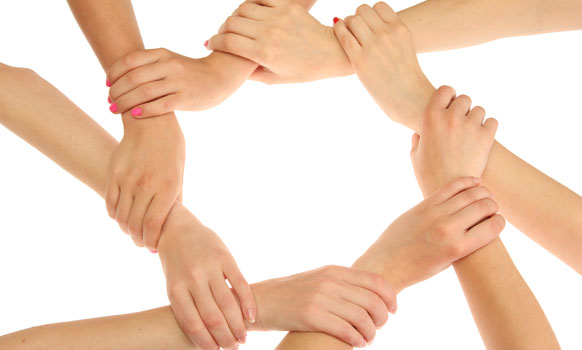 Ever since I got to know the Orthodox Jewish community personally in my late teens, I have been extremely impressed with the ways people help each other. From open homes for guests (including strangers) on Shabbos and holidays, to making meals for postpartum mothers, to groups dedicated to visiting the sick, to countless gemachs (an acronym for gemilut chasadim – acts of loving kindness) where people in need can get everything from clothes, to baby gear, to wedding dresses and much more, the religious Jewish community takes care of its own (and strives to do acts of kindness in general) like no other community I’ve ever seen.

But no group is perfect, and a few years ago I heard from a woman who grew up Orthodox and had parents who divorced when she was young. She described how painful it was to be treated like a pariah by the people in her neighborhood. Then especially, but even now, the divorce rate in the Orthodox Jewish community is not as high as the rest of the country, and I believe that there is a (misguided) fear that divorce is somehow contagious. Since I spoke to that woman, I recently heard from a couple divorced Orthodox women who explained how alone they feel in their communities.

Being the type of person who doesn’t like to sit back once she is made aware of a problem, I began to wonder how we could help these women. I was delighted to learn, just a few days after my worrying began, that someone named Chani (Anne) Neuberger (one of our 2013 Orthodox Jewish All Stars) nine years ago asked the same question and came up with a beautiful answer: Sister to Sister (S2s) – an organization devoted to helping divorced Orthodox Jewish mothers.

The idea to start S2S came about due to a random phone call Chani received from a friend one evening who was asking for a donation to help a single Jewish mother who was struggling to pay the bills for her most basic needs. Chani made a contribution, but wanted to help even more, so she started to do research to find the right place to refer the divorced mother. She was surprised to learn that no such agency or organization existed, so she called a group of friends together to come up with a plan on how to help struggling Orthodox Jewish single mothers. She learned that the divorce rate in the observant Jewish community was escalating at an alarming rate, but that there were no resources available especially geared to the divorced woman. Chani’s vision was to create a sense of community for religious Jewish divorced women, so they should not feel isolated and struggle alone, and to give them all the resources, tools and guidance they need to be independent women and healthy, strong mothers for their children.

Our sages tell us that “The world stands on three things: Torah, service, and acts of loving kindness” (Ethics of the Fathers). It was this Jewish value that motivated Chani and her team to make a difference. The Jewish way of life throughout the ages has always been to reach out to our brothers and sisters in their time of need. I learned from S2S that there are thousands of single-parent families in the Orthodox Jewish community where the mother bears the primary responsibility for raising and supporting her children. These single-mother families are among the most forgotten minorities. Socially, economically, emotionally and logistically, the challenges of being an observant Jewish single mother are complex. These women often struggle to cope with feelings of disappointment, despair and isolation, and the harsh realities of limited education, finances and opportunity. S2S therefore offers assistance at every level – from emotional support to job placement to tutoring for struggling children. S2S serves more than nine hundred women in thirty-one communities, with five to ten new applicants a week.

S2S offers an online members-only forum where struggling divorced women can talk to each other, regular events and get togethers for Shabbos and holidays, placement for overnight stays and meals for Jewish holidays, regular conference calls, webinars and other educational events addressing specific issues related to being a single mother. For these woman who often feel alone and forgotten, S2S sends a birthday gift with a handwritten card to each S2S mother on her birthday. (The gift is purchased from a S2S mother-owned small business). Sister to Sister staff also record a weekly “Shabbat Shalom” greeting that is automatically called to each S2S mother on Friday afternoon. The greeting includes words of encouragement and always concludes with “Good Shabbos with love from your sisters.”

Whose lives have been touched by these kindnesses? People like Ruchie – a mother of four and a victim of domestic violence who was raising her children without child support. Unfortunately, Ruchie lost her job as a computer programmer during the economic downturn, and with no one to turn to, her electricity bill was overdue and her power was shut off. She was referred to S2S who provided a volunteer “advocate” and emergency cash assistance to allow her to retain her home. S2S also helped her to find a new job, provided subsidies for mental healthcare for her and mentors for her children during the most difficult months.

But perhaps the impact S2S has made is best heard directly from their members:

I really don’t have the words to give a proper thank you. I know that whatever I say is an understatement for the abundant feelings I have in my heart. I am writing this thank you note just days before I will be getting remarried..and leaving the family of sisters I have known the last few years at Sister to Sister. Although I know I’m moving on, in truth the loving embrace that you have surrounded me with will never leave me. You have enabled me to be the person I am today..someone ready to get remarried, to love again, to live again. You gave me the self-esteem to first get a new job, to make new friends, to become friends with myself again, and then to find my new spouse. You’ve helped ease my most difficult days. I will be able to look back and remember all the good times spent with my dear sisters, and hold on to the warm everlasting friendships. You have filled my darkest days with hope and laughter.   You cared about me and cheered me on when I felt such despair.  Thank you for the birthday gifts, the Shabbos invitations, for giving me and my children the support and love we needed throughout the year.  Thank you for being my family and never giving up on me. Hashem should give you  strength to continue doing your holy work with much hatzlacha (success) and nachas (joy).

Everyone in the Orthodox Jewish community needs to be aware of this oft-forgotten group. It is up to us to live up to Torah standards of practicing loving-kindness to everyone. Sister to Sister has led the way and the rest of us should follow.