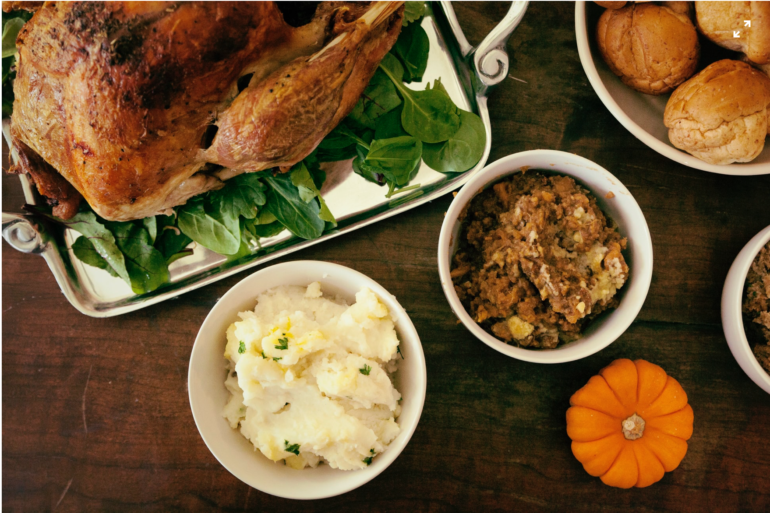 Eat Some Turkey—It’s A Mitzvah!

When you dig into your Thanksgiving turkey this year, remember that it’s not only an American tradition, and an opportunity to express gratitude for our great country, but a mitzvah.

The Torah, in Leviticus Chapter 7, discusses a “korban todah”—a “thanksgiving sacrifice.” The commentator Rashi explains that a person brought such a sacrifice in the times of the Temple “to give thanks for a miracle that was done for you.”  The person offering this thanksgiving sacrifice would host a feast where, along with family and friends, they would partake of the meat of the sacrifice and forty portions of bread—thirty matzot and ten leavened loaves.

In a post-Temple world, there are no sacrifices, but the concept of a feast to give thanks to God for miraculous events did not fade.  Instead, it became a “seudat hoda’ah”—literally a “Feast of Thanksgiving.”  And such a feast is a mitzvah.  The leading 16th century halakhist Rabbi Solomon Luria, the “Maharshal,” wrote in his work of Jewish Law, the Yam Shel Shlomo (Bava Kama 7:37): “Every feast that a person makes that is not [purely] for camaraderie and enjoyment, but in order to give thanks to God or to publicize [the performance of] a good deed, or to publicize a miracle, is called a ‘seudat mitzvah’ [a feast that has the status of a mitzvah].”  Rav Avraham Danzig, the author of the halakhic work Chayei Odom (155:41), cites the Maharshal’s statement in ruling that a community can establish a day of thanksgiving, and that a feast of thanksgiving eaten on such a day has the status of a “seudat mitzvah.”

The Thanksgiving feast has, from its very inception, been just such a feast made to thank the Almighty for the miracle of the Pilgrim’s survival and, later, for the gift and miracle that is the United States of America.  Indeed, New England colonists regularly celebrated “Thanksgivings”—days of feasting and prayer thanking God for a good harvest, a military victory, or the like.

As described by attendee Edward Winslow in his Mourt’s Relation (one of two extant first-person testimonials), what we now call the “First Thanksgiving”—a three-day feast held in the autumn of 1621 in Plymouth, Massachussetts, after the Pilgrim’s first harvest in the New World—was such an occasion.  Winslow wrote similarly in Good News From New England: Or A True Relation of Things Very Remarkable at the Plantation of Plymouth (1624), recounting the tribulations and, eventually, salvation, of the winter of 1621 and the spring of 1622, “So that having these many signs of God’s favor and acceptance, we thought it would be ingratitude, if secretly we should smoother [i.e., cover] up the same, or content our selves with private thanksgiving for that which by private prayer could not be obtained. And therefore another solemn day was set a-part and appointed for that end, wherein we returned glory, honor, and praise, with all thankfulness to our God, which dealt so graciously with us, whose name . . . by them be blessed and praised now and evermore, Amen.”

In later years, the focus of “Thanksgivings” shifted and broadened from thanking God for survival to celebrating the successes and liberties afforded by these United States. Thus, on October 3, 1789, George Washington—six months into his presidency—proclaimed the first official Thanksgiving holiday of a new nation:

Now therefore do I recommend and assign Thursday the 26th day of November next to be devoted by the People of these States to the service of that great and glorious Being…That we may then all unite in rendering unto him our sincere and humble thanks—for… the great degree of tranquility, union, and plenty, which we have since enjoyed–for the peaceable and rational manner, in which we have been enabled to establish constitutions of government for our safety and happiness, and particularly the national One now lately instituted–for the civil and religious liberty with which we are blessed; and the means we have of acquiring and diffusing useful knowledge . . .

As American Jews, we have something extra to be thankful for: We lived, for nearly 2,000 years, as orphaned peoples. America took us in and gave us a home. This country has been a safe haven for Jews for well over 350 years. It’s first Jewish community, in fact, was established by Jews fleeing persecution and expulsion—a group of 23 who arrived in 1654, from newly Portuguese-controlled Brazil.

By the time of George Washington first Thanksgiving proclamation, there were established Jewish communities in a number of cities up and down the Eastern seaboard, from Newport, Rhode Island to Savannah, Georgia, with a total Jewish population in the range of 2,500.

In an August 1790 letter to George Washington on the occasion of Washington’s visit to Rhode Island, Moses Seixas, on behalf of Congregation Yeshuat Yisrael of Newport, wrote:

Deprived as we heretofore have been of the invaluable rights of free Citizens, we now with a deep sense of gratitude to the Almighty disposer of all events behold a Government, erected by the Majesty of the People—a Government, which to bigotry gives no sanction, to persecution no assistance—but generously affording to all Liberty of conscience, and immunities of Citizenship, deeming every one, of whatever Nation, tongue, or language equal parts of the great governmental Machine . . . For all these Blessings of civil and religious liberty which we enjoy under benign administration, we desire to send up our thanks to the Ancient of Days[.]”

Just a month later, in September 1789, Congress approved the First Amendment to the Constitution—guaranteeing the free exercise of religion—along with the remainder of what became the Bill of Rights, and submitted them for ratification by the States.  In Washington’s famous response to the Newport congregation’s letter, he wrote that in the United States, “All possess alike liberty of conscience and immunities of citizenship,” and he blessed the “children of the stock of Abraham who dwell in this land,” promising that “every one shall sit in safety under his own vine and fig tree and there shall be none to make him afraid.”

In the ensuing 230 years, the Jewish population of these United States has burgeoned to over 6 million—many arriving at these shores as refugees fleeing religious persecution, like the original community of 23.  While there have been ups and downs along the way, there has never been another country in our 2,000-year exile that has accepted us with such open arms, that has so vigorously protected our religious liberties, and that has provided such opportunities in every sphere of life—social, educational, economic, and political.  As Jews, this country is truly something to be thankful for.

So this Thanksgiving savor the company of loved ones and a generous portion of pumpkin pie.  But also be sure to mark the occasion with a few words of recognition and thanks for the miracle that is our Republic, and for all it has been and done for us.  If you do, your Thanksgiving meal can truly be called a “seudat hoda’ah” and a “seudat mitzvah”—both a Feast of Thanksgiving, and a mitzvah.

In Judaism, there’s an ancient exhortation to bless the secular government in which a Jewish community lives. As Jeremiah instructs (29:7): “Seek the peace of the city in which you were exiled, and pray on its behalf to God, for in its tranquility you will have peace.”

While this prayer on behalf of the government has traditionally taken the form of a formal, public prayer said aloud in the synagogue—a prayer for the welfare of the United States government was first instituted by New York’s Congregation Shearith Israel during the Revolutionary War, in which the congregation asked the “high & Exalted Kind of Israel, Lord of Hosts” to “bless, guard, preserve, assist, shield [and] save . . . His Excellency George Washington, Capt. Genl. & Commander in Chief of the Federal Army of these States,” and U.S. congregations continue to say a version of the prayer—there’s no reason a community or family can’t fulfill Jeremiah’s call privately as well.  For example, around a Thanksgiving table.

Indeed, the very act of celebrating Thanksgiving is a living prayer—expressed through the slicing of a turkey, the heaping of cranberry sauce, the tossing of a football—for the welfare of this great nation.  And let us all say Amen.

Akiva Shapiro is a litigation parter at Gibson, Dunn & Crutcher in New York with significant experience in issues relating to religious liberties.

Observant Jews Can Teach The U.S. How To Observe An Unorthodox Covid Thanksgiving