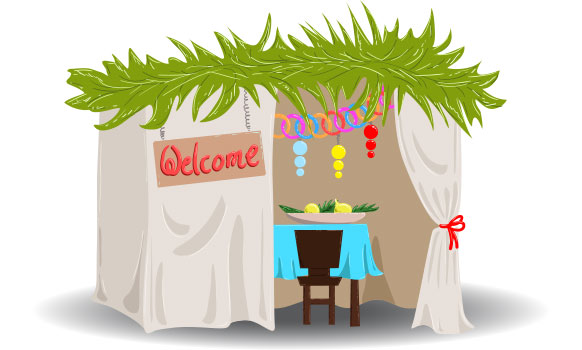 I’m sick of it. So very sick of this election, which feels like the longest election cycle since ever. I’m sick of the divisiveness. Of the self-righteousness. And the ubiquity of it all. While I am proud to say that I have a diverse group of social media friends from many walks of life, geographic locations, religious backgrounds, lifestyles, and beliefs, because of that, ALL I see all day long (thank God for Shabbos!) is why the other side is so evil, so stupid, so dishonest and so very, very DANGEROUS. Did you know (according to many people on both sides) that if the OTHER nominee is elected, this will be the end of the United States of America as we know it?

Yet in the midst of all this fighting, here we are – it’s Sukkos, the Jewish holiday of unity. How is unity expressed in this time? According to the Talmud, we shouldn’t just dwell in a sukkah during Sukkos; rather, “it is fitting that all of Israel should dwell in a single sukkah.” Could you imagine the kind of dissent and vitriol that our entire nation coming together under one “roof,” on the cusp of one of the most volatile presidential elections in U.S. history, would unleash? People can hardly be Facebook friends with people who don’t share their political views!

The “good” guys and the “bad” guys and the “so so” guys all coming together is the Torah’s vision of unity. Or is it? Isn’t there something kind of off-putting about coming together when we classify each other like that? I was delighted to recently see a very original approach to understanding this midrash brought down by The Lubavitcher Rebbe.

The Rebbe believes that the common understanding of the midrash – that the four species correspond to good deeds and Torah – is off. His proof? How could a person truly have Torah if he were immoral? So what do the categories mean then? The Rebbe writes that the midrash is not grouping people into categories connected to the presence or absence of Torah and good deeds. It is a given that they all have them. Rather, it is explaining that different people have different ways to approach their Torah and good deeds. Different people have different approaches to achieve a similar goal.

I confess, I’m not very political. I have a slight leaning in one direction. How did that come about? Probably from listening to my parents over the years, whom I love and respect, and who have a political bent. But do I know for sure that the way I politically lean is truly the best way? No, and my proof is that lots of people that I know and respect root for the other side. How did their political orientations come about? Probably from listening to their parents, teachers, friends, and/or the media. Most people are not political scientists who have carefully examined both sides of every issue and come to their position based on countless years of study.

What are most people, though? I’d venture to say peace-loving people who want to live in a safe world where working hard is rewarded and where those who have fallen on hard times are not eaten alive. Most people generally want the same end goal, but have different ideas about how to best get there.

Most people who are pro-choice don’t want to kill babies, just as most people who are pro-life don’t hate women. Abortion is a VERY ethically challenging issue which requires nuance, sacrifice and is ultimately about trying to find the lesser of two evils. Same with immigration – most people who are pro-open borders don’t want to let bad people into the country, just most people who believe in border control are not xenophobic. But once again – nuance. What is the right way to achieve keeping citizens safe while being merciful on illegal immigrants who escaped a treacherous life? Capital punishment – does it dissuade people from committing crimes or does it too often take the lives of innocents who were wrongly convicted? Both sides cite statistics to show that their way is superior, but how do we know who’s really correct?

Over the course of almost 250 years, we have had leaders in office from both parties. And while there has been tremendous opportunity and prosperity in this country, these are not Messianic times. No one’s approach, outside of the “biggies”–“don’t kill,” don’t steal,” “don’t bear false witness”–is God given. No one has a monopoly on truth when it comes to politics. So let’s stop focusing on how our neighbor gets to the goal (and why that enrages us so much) and spend more time uniting over the kind of world we hope to live in one day.