Psychologist and Chabad mother of six, Sarah Dukes was previously well-known for award-winning songwriting. But in the wake of the Covid-19 Pandemic, she has become renowned for her tenacity, faith and positive thinking. Her husband Rabbi Yudi Dukes (Chaim Schneur Zalman Yehuda ben Hinda Yocheved) became one of the longest-hospitalized Covid patients in the world. From a 38 year old with a perfect health record, to hospitalization and crisis after crisis (including a coma, a stroke, multiple collapsed lungs, a blood clot, weeks on a ventilator and being on a blood oxygenating ECMO machine for an unheard of 9 weeks plus), Sarah has utilized her psychology skills and deep Emunah to weather this storm.

Two months ago, Sarah’s sister asked their father, a pulmonologist, to explain Yudi’s prognosis. Their father had tears steaming down his face and said, “For Yudi to recover, it would take a miracle as large as the splitting of the sea.” But that miracle has come. Yudi is finally on the road to recovery, now ready for rehabilitation. Sarah explains, “I truly believe that he and our family were handpicked for this…Hashem picked us to be on this special mission together.”

Rabbi Dukes, the director of Jnet, (a Torah study partner network), had been carefully social distancing and staying home for two weeks in mid-March. A week later, he had to be hospitalized and his medical complications soon shocked his family and community. Sarah focused on the thought that, “It might seem like he needs a bigger miracle to be healthy but when it comes to the effort Hashem has to make, it’s exactly the same for Him to make Yudi healthy as it takes to make me healthy.” She updated friends and fans on social media and soon had a following of concerned supporters who have helped her process this journey.

Campaigns began for mitzvahs to be done in his merit, and people from all over the world came together. “The power of unity is the most awesome [result] from all of this… That’s what made me feel that Yudi was gonna make it through. He was completely surrounded and protected.” Because of all the mitzvahs and prayers, “Nothing was able to touch or hurt him.” Sarah heard profound stories of her husband’s inspiration. “A girl [had become] angry. She had turned against God. She found our story and said ‘If this person can [go through] this and come closer to God, then I can too.’ She’s now keeping Shabbos.” A friend of Rabbi Dukes is a rabbi in South Africa and asked a Jew from Rwanda to lay tefillin. The man told him that he already had been, saying, “I heard about this rabbi in New York who is sick and was asking people to put it on so I have been everyday.” 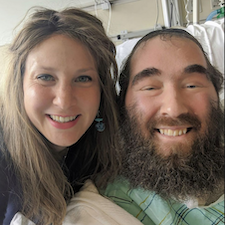 Sarah’s background as a Psychologist has helped her tremendously through this ordeal, particularly her work with Cognitive Behavioral Therapy (CBT). “I had all the tools in my toolbox. and I had to use them.” Part of what that entails is pushing away destructive thoughts and increasing positive thoughts. This mirrors the Chasidic teaching that the mind controls the heart. “I would think of the phrase ‘breathe in faith, breathe out fear.’ That really grounded me.” Sarah knew that the easier choice would be to give up and feel despair. “It was a very overwhelming, devastating crisis. It’s human nature to feel depressed. That’s how God made us. We can only handle so much, but I know we have the other option of thinking positively and believing anything can happen at any second. Hashem can do anything.” This approach was Dukes’ only choice in order to function. “I have six kids, a house. I had to do what I needed to do to move forward. I could not give any power or energy to that despair. Thinking positive was the only other option.” The more Dukes had to do that, the more it became second nature. “It was incredible to see how many people went on this journey with me from ‘I hope he is gonna be okay,’ to ‘I believe he’s gonna be okay,’ to ‘I know he’s gonna be okay.'”

Feeling surrounded by others who were thinking positively helped Sarah’s faith. “Emunah and Bitachon is an avodah. It’s something that we all have within us but it takes work to strengthen that.” This required her to make it second nature. “The incredible thing was, everyone came with me on this journey. I expressed my vulnerabilities [one day on Facebook, saying] ‘If anyone knows without a doubt that Yudi is coming home, please comment because that will reinforce my belief.’ It received hundreds of responses saying ‘I 100% know that Yudi is coming home.’ I realized that it was so beautiful, [this] powerful moment that we all worked on Emunah and Bitachon together and we got there together.”

With Sarah’s children, “I encouraged them to ask questions. I presented facts in the non-scariest way possible… I’m not going tell them how they should feel. They learn from how their parents react to things.” Months ago, when Rabbi Dukes was still in a coma, the children made him a “you did it” sign. “I wanted that to be on Yudi’s wall so as soon as he opened his eyes, he could see that we believed he was going to wake up.” Dukes’ children know to give her space when she has to take a call from the hospital. “The hardest thing was when I heard scary news. I gave myself a couple of minutes to feel, and then prepared myself to be the best mom I can be for the kids. There was no one else to do it.” This was when no outside help was allowed, but for Pesach, Dukes’ rebbetzin sent helpers to stay with her. A few weeks later someone moved in to help. The children still feel Rabbi Dukes’ absence greatly.

The day that Sarah was finally allowed to visit her husband, he woke up from his coma. Then they allowed her to come every single day. “Now that he’s awake, he’s inspiring everyone that comes into the room. He’s turned it into a Chabad house. I made sure there was a tzedaka box.” His nurses, doctors and therapists all know the drill. “They come in and put a penny in. People love coming into his room. There’s [my] music playing and pictures from the kids. It’s just a happy place to be.” Rabbi Dukes told his wife what the Friedecker Rebbe said after he had come out from prison and being tortured. “‘I would never ever want to go through such pain again, but I would never ever want to give up what I gained from all of this.’ This didn’t happen to us, it happened for us. That one word shifted our entire perspective. What can we gain from this?” More importantly, the Dukeses now ask “What are we going to do about it?”

Now, Rabbi Dukes’ recovery is nothing short of miraculous. “[Healing can] happen at any time. The world is being recreated every second.” Rehab is the next step and Dukes is thrilled that it’s one step closer to home. “I need him, the kids need him.” But the rehab journey is not an easy one, financially or otherwise. A fund was set up by the Dukes’ friends “to raise money for our family to heal from the trauma. My husband’s not able to work right now. I’m not able to work [either].” While Rabbi Dukes is again learning how to speak, stand, walk, eat solid food and breathe on his own, the positive prognosis is nothing short of miraculous. “Nothing’s too complicated for Hashem. Just because it seems like [Yudi] needs a bigger miracle, it doesn’t take more effort for Hashem to make that miracle. It’s the same miracle. The same miracle as you and me talking right now. Hashem is not bound by nature.”

While music isn’t at the forefront of Sarah’s mind right now, it continues to bring her and her entire family comfort. “If I had the chance I would play so much more. I do try anytime I can. I did compose a song with my son. It was a very nice bonding moment.” In the meantime, her music brings joy to her husband and everyone who visits him in his hospital room. Sarah is also looking forward to releasing a song soon with a special meaning. “I have a new orchestrated single, Triumph. I’m hoping I’ll be releasing it at [Yudi’s] discharge.”

To donate and support Rabbi Dukes’ ongoing recovery and that of his family, visit: https://yudi.rallybound.org/

"Unorthodox" Through a Convert's Eyes & Other Orthodox Jews in the News