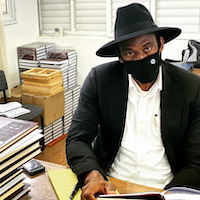 It’s official. Former Knicks star, Amar’e Stoudemire has joined the team. But the uniform for this team includes a yarmulke, tzitzis, and a black hat. How did Amar’e Stoudemire, now known as Yahoshafat ben Avraham, become an Orthodox Jew? A big part of his journey came about due to learning with a man named Rabbi Harry Rozenberg, an entrepreneur whose beverage company and passion is centered around the lost tribes of Israel.

Amar’e Carsares Stoudemire was born in Lake Wales, Florida. Because of family struggles, rooted in his parents’ inconsistent presence in his life, Stoudemire had a difficult upbringing and turned to basketball at the age of 14 to help cope with his situation. Once he graduated from high school, he started playing professionally for the Phoenix Suns and was named the NBA’s Rookie of The Year. Fast forward to 2010, when the New York Knicks announced Stoudemire’s official arrival to their team, he proclaimed, “The Knicks are back!” Fans were very excited with his addition to the team as it had been on a losing streak around that time.

While all of this was happening, Rozenberg and his friends heard that Stoudemire had publicly mentioned that he was of Israelite descent and a member of the lost tribes of Israel. This made him perfect spokesperson for their beer brand, Lost Tribe Beverage. Soon enough, they reached out to Stoudemire on Twitter, tweeting about Torah and biblical prophecy, and he immediately responded.

After exchanging a series of messages on the topic of lost tribes, Stoudemire invited Rozenberg to visit him in Texas, where he was staying at the time, in order to continue their conversation in person. Stoudemire explained to Rozenberg, “I’m looking for people to study Torah with. I want to grow in Torah.” Once they met and spoke about the prospects of becoming learning partners, a spark ignited within Stoudemire. While Stoudemire never got involved in Rozenberg’s beer company, they do have an online course on the lost tribes of Israel for college credits or for free at STAT.Academy.

They began officially learning in early 2012. From then on, their bond and Stoudemire’s profound passion and pursuit for the truth has only gotten stronger. It should be noted that Stoudemire wasn’t randomly calling himself a descendent of Israel. He grew up with this tradition from his mother that his family descended from a lost tribe.

While Stoudemire never got a DNA test to prove he has an Igbo connection, there is a possible explanation to the mesorah he to from his mother. Igbo was the main group of Africans that were brought to the U.S. during the slave trade. Rozenberg believes that a large number of today’s African Americans have Igbo ancestry and therefore Jewish ancestry. This group self-identifies as Jewish and practices Jewish rituals, including circumcision of boys on the eighth day, separation of husband and wife during the women’s menstrual cycle, dietary laws very similar to kosher, and more. In fact, according to Rozenberg, “the government of Israel recognizes the Igbo as a potential lost tribe.”

Stoudemire’s drive and loyalty to stay true to his history directed him to Rozenberg who solidified his commitment to Judaism through Halacha, which meant a conversion. Through their unique chavrusa and friendship, Stoudemire came to realize that his conversion was merely the sand that needed to be mixed in with the cement to be recognized legitimately. One may be a seed of Israel (be of Jewish descent) but in order to fully rejoin the people of Israel you have to do it according to the Torah’s way.

Rozenberg explains, “the Torah is not just some document you can inherit and self- interpret…even if you’re from the people of Israel you have to actively do something to reunite with the Torah, there has to be an act.” Stoudemire was willing to take that step forward. As he continues on his spiritual path, he is still actively involved with basketball by working for the Hapoel Jerusalem team in Israel and has found fulfillment in integrating Torah and basketball, both playing key roles, within his life.