This Orthodox Jew Is Auctioning Off Marilyn Monroe’s Siddur

Marilyn Monroe once sang “Diamonds are a girl’s best friend,” but perhaps she should have added “and siddurim are a Jewish girl’s faithful companion.” Earlier this month, the media exploded (to the tune of 30,000 plus articles!) when news that Monroe’s personal siddur was being auctioned off, but very few people knew the auctioneer is a religious Jew. We sat down with Jonathan Greenstein, founder and CEO of J. Greenstein Auction House to discuss the celebrity Judaica he has worked with over the years, as well as the deep pull he has to preserve Jewish history (and he hopes you will join him in this cause). 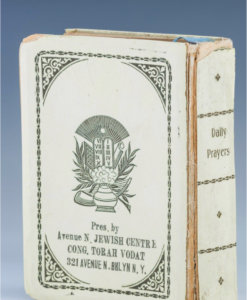 “30 years after Monroe’s death, Christie’s put up a menorah, a reform siddur, and an Orthodox one. The Orthodox siddur was bought by a lady…who consigned it to us.” The siddur has an impression on it from the shul of Monroe’s Jewish husband Arthur Miller, including pencil-written notes. The dates on it correspond to Miller’s possible bar mitzvah. “CNN picked up the story, Washington Post…New York Post, New York Times, and this all happened a couple of weeks ago. It exploded from there.” This is not the first time Greenstein has auctioned off a piece of celebrity Jewish history, causing a media blitz. Sammy Davis Jr.’s menorah, Joan Rivers’ seder plate, and more have been featured on CNN, The New York Times and The Wall Street Journal. J. Greenstein’s upcoming auction, to be held on November 12th, will include rare silver menorahs, antique Torah crowns, ceramic sculptures and other less-famous artifacts.

While Greenstein is thrilled for the attention this A-lister owned siddur has brought, he hopes that it sheds light on the other 149 treasures involved in the sale. “It’s always celebrity Judaica that ends up getting us into the newspapers.” Other items include a tzedaka box from a Dvinsk yeshiva circa 1900, a 300 year old Torah shield, and a Jerry Lewis money clip with a 14K gold Torah sculpture as decoration. “A lot of these items are coming out of the closet now as children and grandchildren continue to assimilate, and don’t have much of a connection to their forefather’s objects.” Greenstein has found items on eBay, indicative of the now-all-too-common American story. People are parting with “Bubbie’s silver candlesticks,” because no one in the family is Jewish any more. 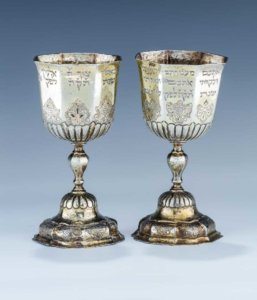 In fact, Jews tossing out their history is exactly what pulled Greenstein into this field in the first place. “I was thrown out of the Yeshiva of Flatbush when I was in 9th grade.” The free time Greenstein had in the afternoons after switching to public school allowed him to get a part-time job at an antique shop called The Gold Bug. “The price of silver was $50 an ounce. Every little old lady was bringing her father’s and her grandfather’s silver kiddush cup and bringing it in for the value of silver.”

While Greenstein wasn’t fully observant at the time, “I still had a connection to Jewish history and being traditionally and ethically Jewish. I just felt it was wrong to melt these things down for the value of silver.” The non-Jewish owner allowed Greenstein to buy all of the Jewish pieces that came into the shop, which soon turned into quite a collection. Greenstein eventually had to sell some of it, and that led to him buying more. “Before I knew it, this became a love, a passion and somewhat of a career.” This has been Greenstein’s life for the past 36 years. While some Jews have made it their life’s work to save lives, Greenstein has made it his life’s work to save Jewish history.

Greenstein’s Jewish upbringing was confusing, having a non-observant mother while being sent to Yeshiva, but in his late 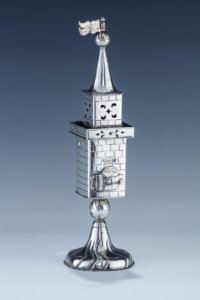 teens, Shlomo Carlebach’s music and NCSY brought him back to observance, “through love and admiration of God.” In the meantime, Greenstein worked in catering and as an EMT to make ends meet. “In my 30’s, it became a real business.” In 2004, he was asked to run a charity auction to benefit a Lubavitch youth organization and opened his own auction house in addition to his home care company and real estate investment firms.

During the Bernie Madoff scandal, Rabbi Arthur Schindler left his pension in the management of Bernie Madoff who obviously absconded with the money. His widow had two pieces of antique Judaica that she consigned to Greenstein. Greenstein refused to take commission from the widow, wanting to do this L’shma (for the sake of the mitzvah).”CNN picked up the story and things just found their way to me. Sammy Davis Jr. converted to Judaism and was presented with a menorah in the 1960’s. He owed the IRS money, so they took his estate and everything he owned into an auction in California. The former owner bought it and it found its way to me.” While the menorah wasn’t beautiful, it was cool, and that had value. Joan River’s Seder plate also wound up under Greenstein’s gavel after her passing. 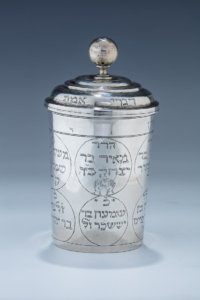 Greenstein’s lifelong passion has a higher purpose. Not only are his objects great investments, as the value of many pieces he has sold increases, but the holiness inherent in each piece is irreplaceable. “My feeling is that I would rather have the spirit of the person before me when I’m making a bracha, it adds extra kedusha.” Greenstein also can’t deny the beauty in it. “You’re teaching your children and your grandchildren history, heritage, not just that everything off the shelf is beautiful, but that things are beautiful from 100, 200, 300 years ago. Most importantly, everything back then was made by hand…back then you had a holy silversmith taking a piece of metal and hammering things out by hand…you’re bringing the shtetl back to life on your Shabbos table.” In a disposable world where almost nothing last, a few tradition-heavy treasures seem like the perfect

To participate in the auction on November 12, visit jgreenstein.com.

A Pittsburgh Rebbetzin Reflects On Tree of Life Tragedy

Did Rivkah Really Get Married At Three Years Old?