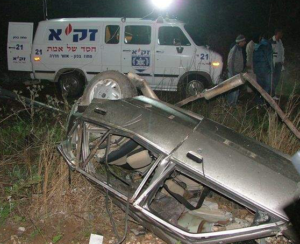 During a life-threatening crisis, you might expect a man dressed in rabbinic garb to pray for you, but you probably wouldn’t think he’d be the one to save you. With ZAKA, Israel’s primary rescue and recovery organization, whose volunteers are mostly religious Jews – a majority of them Haredi – you get both!

ZAKA was founded in 1994 after a wave of terror attacks hit Israel, and a Haredi police officer was asked by his superiors to gather the remains of the deceased. Boasting over 1500 volunteers two decades later, ZAKA’s force is on call 24/7 to respond to any terror attack, accident, or disaster. Their expertise is not just limited to Israeli search and rescue. Their International Rescue Unit operates at mass-casualty incidents worldwide. With the motto of “saving those who can be saved, honoring those who cannot,” ZAKA rescues and recovers Jews and non-Jews alike.

When someone dies of unnatural causes, ZAKA arrives to bring the body honor and provides free funerals for anyone who cannot afford one, regardless of religion, sex, or race. “One of our guiding principles is that all men are made in the image of God,” says Yechezkel Farkash of Zaka North. “The halacha to honor the dead is not only about a dead person, but about respecting the lives they leave behind, as that their families need closure and a place to mourn.” ZAKA volunteers accompany the families to funerals, shivas and even yahrzeits, providing the support needed for them to perform all aspects of honoring the dead.

Their many initiatives benefit Arabs and Jews, secular and religious alike. Farkash is relieved, “[Haredim] can be in the news for entirely positive reasons.” Just as the organization is changing secular attitudes about Haredim, they are also changing the perspectives of their Haredi volunteers about the general population. This past January, ZAKA headlined an initiative between Muslim, Jewish, and Christian communities in Israel. “ZAKA: Bridging Worlds saw leaders including Rabbi Yona Metzger sign a declaration of cooperation, issuing a joint call to members of their respective communities to join ZAKA as volunteers, receive training in life-saving, rescue and recovery techniques and ensure the respect of both the living and the dead in accordance with their religious traditions.”

Volunteer Reuven Kushilevitz relates, “I have been given the zchut (merit) to help others in the most difficult times and for me it is a special mission. I understand the importance of life, and little things that are annoying do not bother [me] anymore.” Calls come in day and night from ZAKA’s hotline or from the army, emergency services, police, firefighters, Homefront Command or foreign governments. Volunteer Eli Levy says, “We see how much people admire ZAKA’s activity…people turn [to us] for our advice and want our help…Every volunteer gives himself 100% and is ready to fight death.” While some volunteers work in emergency services by day, many are employed in unrelated areas. Aviad Israeli, a volunteer who works in the medical field, was already helping others and wanted to do more. “ZAKA is an organization of the righteous. Good people who enlist their free time for no return, day and night…ZAKA will go out and do what is necessary after all.” 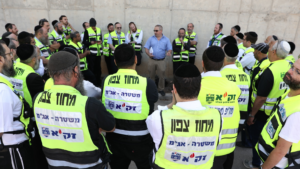 Chesed Shel Emes (burying the dead) is ZAKA’s signature mitzvah. It is considered one of the highest acts of altruism because there is no way for the recipient to repay the kindness. ZAKA volunteers are the last to leave a scene of a fatal incident, clearing away even spilled blood. It is not a job for the faint of heart.  Volunteer Yossi Ben Porat finds that somehow, working in these intense conditions gives him strength. “Volunteering in ZAKA revives me, despite the irony… it is a contribution to my nation…and that gives [me] energy and adrenaline. We hope that we will have no need [to be called], but if [we are], then we [go with] great awe and devotion.”

This appreciation for life is something that has had a profound effect on those who work with ZAKA in Israel and abroad. With the peaceful initiatives already making such a difference in Israel, ZAKA’s international efforts are not just appreciated, they are imitated. Having similarly earned the respect of the world at large, ZAKA is now training volunteers in many countries around the world. With this training, the organization is gratified to spread the good that comes from their own hard work worldwide.

But perhaps the best way to understand the impact of their work is to hear from one of their numerous beneficiaries: The black hole and shock struck us in one moment when we received the news that our most precious daughter was hit by a fire in Haifa’s Carmel disaster. We were silent and only the sound of weeping surrounded us from all sides. We did not find the strength in our souls to get up and be practical. Somehow you came to us like light in the dark, you took care of our daughter who was no longer among the living and cared for all – the procedures related to burial, the body arriving intact to the grave, bureaucracy or any decisions of one moment, while we were paralyzed and grief  had overtaken us.

You also took care of us from that moment, and it did not stop until after the shiva. You are people whom the hand of God has touched. You are light in the darkness, without any consideration and without any interest, you gave us your heart and soul in our difficult time. May the Creator repay you, that you will never see sorrow and pain.

To learn how you can be part of ZAKA’s new home front emergency preparedness initiative in northern Israel, click here.

Ariana Grande: Why Men Need To Keep Their Hands To Themselves