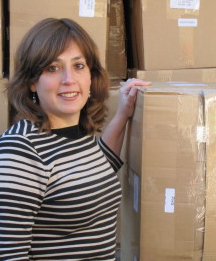 Far too often, we forget how essential clothing is to our survival as well as our self-esteem, a resource to which not everyone is privy. Countless clothing donation organizations exist across the globe, but one has been making a major impact across Israel. Yad Leah, founded by Jessica Katz, helps out the impoverished and underprivileged by providing them with much-needed clothing as well as an often-overlooked level of dignity, and in doing so gives thousands of volunteers the opportunity to provide their time and effort to actively give to those less fortunate. Katz says, “I realized that people really really wanted to give and they just needed an outlet, a network to be able to give.”

Run by Orthodox Jews, Yad Leah is an organization that exists in twenty-five communities across Israel, distributing new and gently used clothing to the less fortunate members of the community. “Am Yisrael, the nation of Israel are here to help, you just have to find your own niche.” Which is exactly what happened after Katz witnessed firsthand the abject level of poverty that existed in many Jewish communities. She began collecting clothing to help provide for the needy and what originally began as a month-long Mitzvah project for her and her family soon blossomed into an impactful and influential non-profit, serving the needs of countless Israelis.

Katz and her colleagues soon set up Gemachim “which stand for Gemilut Hasadim” that are traditionally storehouses for second-hand items such as clothing and kitchenware, but Yad Leah decided to take the system a step further. Rather than offer the items for free “people pay a nominal amount, just a few shekels so that they can preserve their dignity and pride.” Maimonides expounded upon the importance of preserving one’s dignity for the person receiving tzedakah, a notion which Yad Leah imbues by functioning more as a thrift shop rather than a plain clothing depository. In this way, purchasing something from the gemach functions more as a great bargain rather than an act of charity, a notion which attracts parents as well as underprivileged teenagers who may not be able to have the same sort of shopping experience as their peers. “That’s our whole mission, to give with dignity.”

Currently, the organization collects donated clothing throughout the year at its headquarters in Passaic, New Jersey, and then ships over twelve hundred boxes of clothing at a time to Israel where it is then distributed around the country. “Each thrift shop is managed by one of our managers or volunteers and we are in constant contact with them so that we can tailor and custom make each box to custom fit the needs of that community.” Therefore, each center is provided with its own distinct needs. Over the past fourteen years, volunteers have poured in from all over the Northeast, ranging from Shul groups to high school students and even attracting volunteer-minded singles events, all coming together to provide Jews across the world with much-needed clothing. While the organization’s focus has mainly been in the tri-state area, Yad Leah is always looking to expand and recently completed its first clothing drive in California.

There are numerous stories about how much the Gemachim have impacted their communities, granting parents the resources to provide effectively for their children, themselves, and others. Katz related a touching story about a young boy who was too embarrassed to go on his end of the year hike because he did not have the proper bathing suit, backpack, and gear for the trip. When he confided in a close friend, the two went to their local gemach and were able to find everything that the boy needed. He ended up going on the trip and ending his school year on a fantastic note. “You don’t think about how clothing… how transformative it can be, it really changes people’s lives.”

Eric Goldstein graduated from Northwestern University with a degree in Film and screenwriting. After university, Eric attended Machon Yaakov Yeshiva in Jerusalem where he explored aspects of Jewish thought, identity, and history. Outside of writing, Eric is passionate about cooking, cinema, and all aspects of Jewish culture.

What is the Jewish View of Abortion?