If You Want To Strengthen Your Faith, Antisemites Can Help

As the Jews prepare to receive the Torah this Shavuos, let’s be honest – faith is harder to come by than ever. In a world where science has almost everything figured out, who needs God? In a time where it is exceedingly uncomfortable to see our nation as different from others, how could we believe that we Jews have a unique role among humanity?

These are serious questions which we can’t minimize, and yet, in the midst of all our reason and completely against all logic, once again, just days before we prepare ourselves to receive the Torah anew, you can turn to any media outlet if you want to strengthen your faith. You will see the Jewish people and Israel standing out in a way that makes no sense, in a way the Talmud tells us would be our fate.

“What is [the reason for the name] Har Sinai? That hatred descended to the idolaters on it.” (Shabbat 89a) Our sages noticed that “Sinai” sounds like “sinah” (hatred) and understood that in accepting the Torah, we would become hated (without reason) in the world throughout time.

Hamas organized a “protest,” which has been raging for some time, but had new life breathed into it after the U.S. Embassy was moved to Jerusalem earlier this week. This is a deadly protest with the aim of getting terrorists across the border into Israel in order to murder Jews. But somehow people all over the world are confused by this. Smart people. They want to know why Israel is killing protesters. People with picket signs don’t deserve death, they reason.

The head of Hamas in Gaza, Yahya of Kinvara said, “The goal of Hamas is to break through the wall and rip out the hearts of Israel from his chest.” Terrorists are explicitly stating their intent to breach the border of a sovereign nation with the goal of spilling innocent blood. Yet Israel is still at fault and moral equivalencies continue to be made. 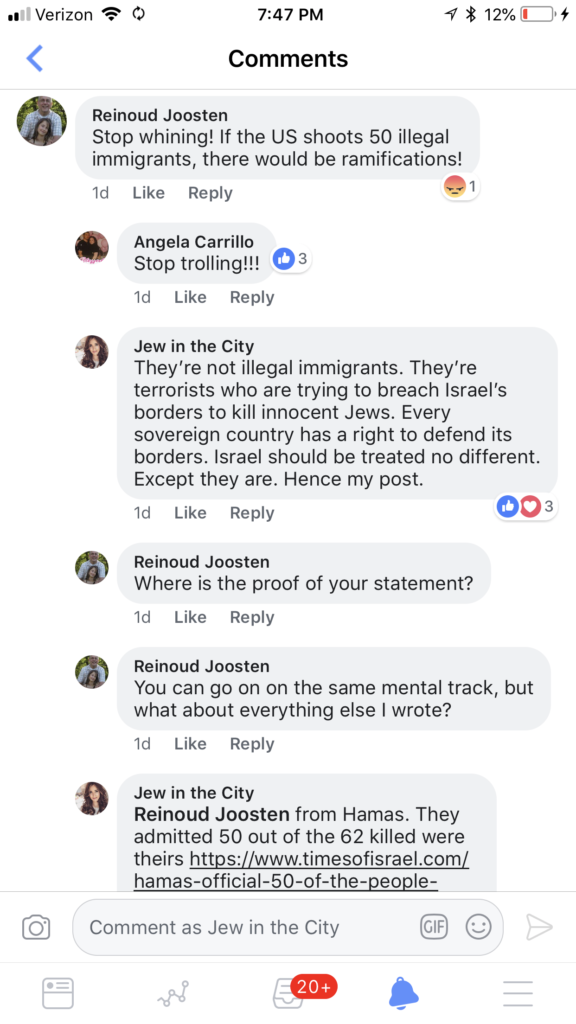 I had a fascinating encounter with someone on the Jew in the City Facebook page on this topic. I posted the quote above from the Talmud, that illogical hatred would come from Har Sinai, and a man named Reinoud Joosten told me I was “whining.” He compared terrorists to “illegal immigrants.

I’ve got this one, I thought. I’ll just point out the fact that these “illegal immigrants” are actually armed terrorists. Which you can see from the screen shots to the left, I did.

But Mr. Joosten didn’t believe me. He wanted proof that these “protesters” were actually dangerous. Well, as fate would have it, just in the middle of our debate there was a news update, and the head of Hamas actually took credit for the attempted breech and acknowledged that 50 out of the 62 people killed in the “protest” were in fact Hamas terrorists.

But instead I smiled to myself and thanked Mr. Joosten for strengthening my faith. It was a perfect reminder as I prepare to accept the Torah once again. While it may at first seem terrifying to live in a world where so many people are illogically against us, when we remember that Hashem is in our corner, there is nothing to fear. 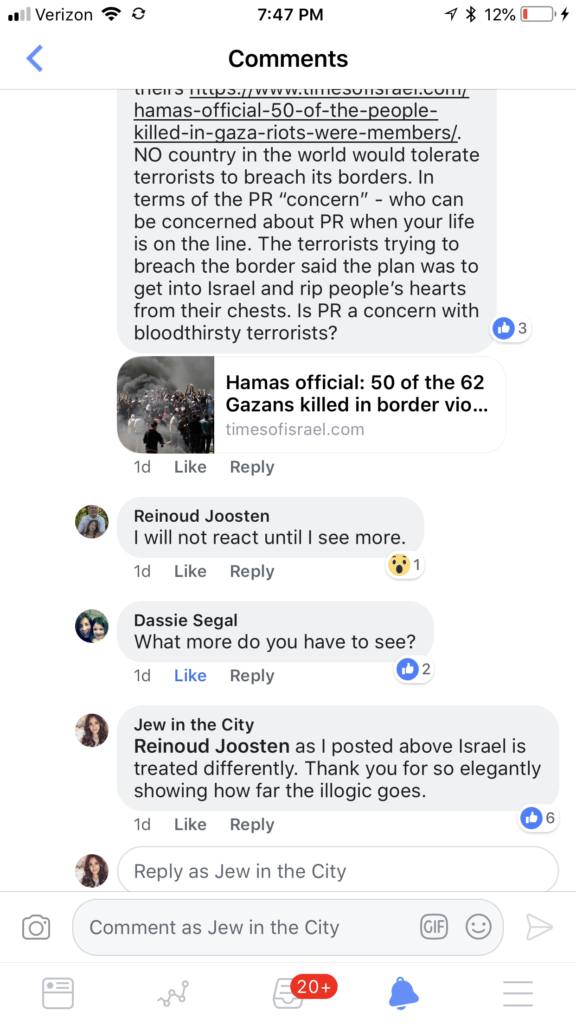 Why Judaism Believes In Laurel AND Yanny