The Stranger Who Knew Me

I recently learned a lesson in kindness from a complete stranger, and it profoundly affected me. It was Thursday evening before the 1st of January that we discovered our inspection sticker was due to expire. The 31st of December. Being that the only business day left to take care of the inspection was on Friday I was left with no choice but to travel 45 minutes to the nearest garage in hopes of having it taken care of in a somewhat timely fashion.

Well, it turns out I wasn’t the only one who had waited to the last day to do this. It seems the majority of Vermonters also went to the garage that day. Actually, they managed to pick the very same garage I had chosen. Cute.

Now I get that no one wants to spend their Friday afternoon, heading into a holiday weekend, at the garage. But as an Orthodox Jew who observes the Sabbath, there is a whole different level of stress and obligation that falls on a Friday. Starting at sundown Friday evening until an hour after Sunday on Saturday evening, we do not use electricity, cook, drive or a number of other things. Practically this means that everything that we will be eating and doing on Saturday needs to be prepared on Friday. So sitting at a garage on one of the coldest and busiest days of the year, when nothing was prepared at home, was just the perfect storm.

But it gets better. To have your car inspected you need to show proof of insurance and registration. Two forms that are always in the very same place in my car which were, of course, nowhere to be found on this particular morning. I asked if I could show proof of registration online but no such luck. So my only option was to head to the DMV and get a new registration. Now if the garage was a fun place to be on Friday before a holiday weekend, the DMV was certainly going to be a blast.

Miraculously, less than an hour later I was back at the garage, new registration in hand, and a ridiculously long line of people piling up. Soon I would need to show proof of insurance. Fortunately, that was something that I could do on my phone. I called my insurance company, and after pushing endless prompts, a real human finally answered and I was able to explain my predicament. She agreed to email me the proof which she quickly did. Problem was…I couldn’t open the email. Their amazing security was oh so secure that I was unable to access my own account. I tried new passwords, I tried new log-ins. Nothing.

So there I was, sitting in a packed room, waiting in line for an inspection that I couldn’t get done without the email opening, and the clock was ticking. I was hitting the point where if I didn’t get it taken care of pretty immediately, I would need to turn around and go home and do it all again following week which would open me up to a pretty hefty ticket if I were to get pulled over.

I decided I would try my insurance company one more time and see if they could get me the form a different way. I pushed those little buttons on my phone for the prompts as hard as possible, hoping that this would relieve my annoyance without others noticing. And then, after what seemed like an eternity, a woman answered. She began to ask me the very same set of questions that I had just responded to. I realized she had no choice but to get my information anew, but I really didn’t have the time to go through this again.

I tried to quickly respond and explain my situation. She began to lead me through the ways to open the email and I let her know, as calmly as I could, that I had done everything possible and it simply wasn’t working. Now, at times like this, my worst comes out. All that annoyance, frustration and stress somehow becomes the fault and responsibility of the person on the phone. I ridiculously convince myself that if I can make the other person feel badly enough, I will somehow feel better. Looking back, it is humiliating how many times I have been so rude and impatient to someone whose sole job was to try to help me.

But this time I couldn’t get away with that. The room was packed, and silent. Every word was being heard so I needed to make sure I was being nice. After all, I do live in Vermont, home of the nicest people alive, so I had the additional responsibility of being a Vermonter on the phone. Well, this extremely kind insurance rep said she would help me out right away. She agreed to fax the garage my proof of insurance and email me a picture of my policy so that I would be able to circumvent the security measures. I was so relieved as the mechanic was standing, waiting for the paperwork to in order to begin. I thanked her profusely, and she said it was her pleasure to help me.

Then very nonchalantly said, “Shabbat Shalom” as she ended the call.

I was too stunned to respond so I just hung up, got my paperwork to the mechanic, and then tried to figure out what in the world made her say that. “Shabbat Shalom” is the Hebrew expression used to wish someone a peaceful Sabbath. It is not an uncommon phrase, but certainly not one I would expect to hear from the insurance representative. I looked at our policy to see if there was some indication that we are Jewish, but there wasn’t. Even my husband was listed with his English name, “Ashley” and not his Hebrew name, “Asher” so no clue there.

I decided I would send her an email to figure out the mystery. I now knew how to contact her because she had just emailed me my policy. So I wrote to her thanking her again for her help and asking her how she knew to wish me a “Shabbat Shalom.”

Her response was life changing.

I am so happy you were blessed! Mr. Ashley Crispe is designated as “Rabbi” on the account and also designated as your husband. It seems to me that it is important to your family to designate your husband as Rabbi, [as I would also], otherwise, we would not have had the designation. I am aware the command of HaShem for His people to keep the 7th day holy and rest. That means that your husband is required, especially as rabbi, to keep Shabbos, which also means that you have the loving pressure and responsibility to ensure this mitzvah before sundown. No doubt the car issue was a rush considering the time of day and being SO COLD! There has always been an America[n] popul[ace] who has always loved our Jewish citizens.

Ah gutten Shabbos and come Saturday evening, I bid you Gut Voch. Please remember me this Shabbos, I will do the same for you.

This woman knew I was Jewish. She knew I was married to a rabbi. She assumed (correctly) I was therefore in a rush to return home and prepare for the Sabbath. And she did everything in her power to help me.

All I could think was how she would have felt and what she would have thought had I been rude. Had I blamed her for my stressful day. Had I taken out on her what had absolutely nothing to do with her and was ultimately my irresponsibility for having misplaced proof of my car insurance. But fortunately, knowing that others were in that room, kept me in check. And even though I did the right thing for the wrong reason, Judaism teaches that by doing so, you will eventually come to do the right thing for the right reason.

At that moment it was clear to me that every single minute of my day that Friday worked out exactly as it needed to in order for this event to have occurred. Had my paperwork been in the car, I never would have called my insurance. Had the first email not come through encrypted, I never would have called back. Had anything been different, she would not have answered the phone and connected with me exactly when it needed to happen.

And most importantly, she taught me that every single person we encounter is an opportunity to make a connection and an impression. We can choose to be kind and helpful and friendly, or rude and impatient. We can make someone’s day or we can ruin it. And even more so, how we act and come across is a reflection of who we are. In this case, I was not just some customer in Vermont but a Jewish woman, the wife of a rabbi, on a Friday afternoon heading into the Sabbath. I was representing a lot more than just myself. And someone was watching. Ultimately, even though it may be easy to forget, Someone is always watching.

I sat there practically in tears as the connection of all these events sunk in. And then the mechanic came out and told me my car was ready and I could head home. He then told everyone else waiting that they also could go home. It turns out there were no more inspection stickers left for 2017. I had been given the very last one….

Sara Esther Crispe, a writer, motivational speaker and mother of four, is the Co-Director of Interinclusion, a social mosaic which perpetuates the arts, sciences, literature, and music through Jewish tradition. She has worked as a local producer for shows on the Oprah Winfrey Network, HARPO Productions and Refinery29 and lives with her family in Danby, Vermont where they run Jewish experiential retreats. 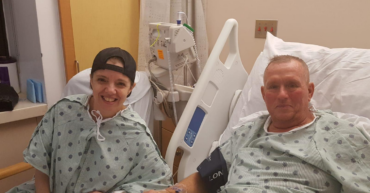 Nissim Black: The Famous Rapper Who Tried Every Religion Then Became A Hasidic Jew