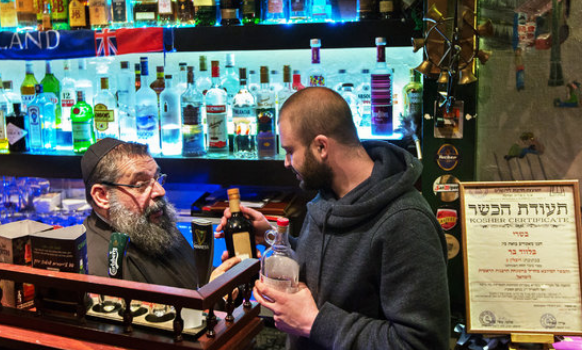 
Hasidic Rapper Melts Faces of Average New Yorkers
These guys were skeptical to say the least, but rapper Sammy K threw down some serious flow. They changed their minds immediately.

Laugh, For God’s Sake: The Dos and Don’ts of Ultra-Orthodox Stand-up Comedy
So what’s the deal with kaparot, anyway? Orthodox Jewish stand-up comics are taking to the stage – and the rabbis approve.

A Rabbi Walks Into a Bar — and Enforces the Law
Rabbi Shmouel Semelman is the director of the Department of Alcoholic Drinks for the Jerusalem Rabbinate, and a world-renowned arbiter of the exemptions granted (or denied) to beverages that do not bear standard kosher certification. On his website, kosherliquorist.com, the rabbi serves as an oracle for anxious observant Jews who write him asking about the kosher status of obscure Belgian wheat beers or fashionable boutique gins.

Solomon Brothers rock The Boxer on Israel’s The Voice
Move over Simon & Garfunkel – the Moshav has given birth to folkier folk. Watch these amazing, observant siblings wow the judges with their tight harmonies and mandolin work.

Meet the Charitable Alternative to StubHub, Sharing Seats
President Yoni Greenstein founded the nonprofit in 2009 in order to give ill and underprivileged children event tickets. By day, the Orthodox Jewish man works as a sales manager for IDT in Newark, N.J.—by night, he’s making children’s dreams come true with his nonprofit organization whose goal is to provide sick and underprivileged children event tickets that may otherwise go unused.

Stop Freaking Out About What You're Going To Cook For Passover!