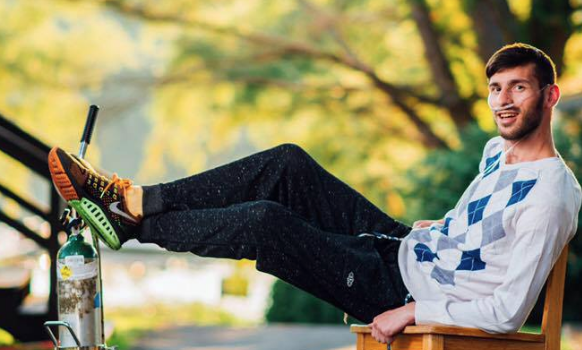 The Orthodox Jew Who Found Faith Through His Own Illness

Ben Taplin was born in Israel and grew up in Lakewood in a normal Yeshivish family. But when he was in high school, he started to challenge the teachers, asking why he had to think and act the way they did. He bounced around to different high schools and ended up at Waterbury Yeshiva. His rabbi was “very supportive of people being who they were,” says Taplin. There, he heard about Kids of Courage, a charity that helps “children that have severe illnesses and makes their dreams come true.” Some are blind, on oxygen, use wheelchairs and have serious handicaps. They have a travel camp in which 135 or more critically ill kids visit dream destinations each summer, accompanied by necessary medical and physical logistics (including doctors and nurses). In the summer of 12th grade, Taplin became a counselor.

“These kids can’t just fly on an airplane…they have to charter their own out of Newark to their destination: San Francisco, Orlando, LA, it’s an incredible sight. That summer opened up my eyes to all different illnesses that I had never seen before.” Taplin also saw how the kids dealt with it, “[with] a smile on their face even though they are going through an extremely difficult challenge.” These children are given a chance to disconnect from their daily struggles and experience the same adventures as other children. Visiting parks and attractions, bonding with new friends and meeting celebrities were all a part of it. “The campers give us more than we give them.” Soon after, he went to Israel to study.

He moved back to Lakewood and looked into becoming a criminal defense attorney. “One day I experienced chest pain. Hatzolah brought me to the hospital and they realized that I had a lung infection.” At the time, the doctors didn’t think it was severe. They put Taplin on antibiotics and low-level sedation. “Two and a half months later I wake up in the hospital with a trach[eotomy], chest tubes, and didn’t know where I was. I was told that I had been in a coma.” Taplin’s family did not expect him to wake up. During that time, he had a collapsed lung and had to be on ECMO: Extracorporeal Membrane Oxygenation. ECMO removes blood and artificially takes out the carbon dioxide, oxygenating red blood cells. It is used to sustain life after heart or lung failure. “The chances of survival after that are very slim. Most people are on it for two weeks. I was on it for seven.” He was eventually diagnosed with ARDS: Acute Respiratory Distress Syndrome, an often fatal condition in which fluid collects in the lungs’ air sacs, depriving organs of oxygen. In Taplin’s case, it affected his lungs and heart. Other painful conditions spiraled from there.

Taplin woke up unable to move or breathe. “Fortunately, I had been involved with Kids of Courage….I had gone to visit people in the hospital, I was familiar with death, had been to cemeteries… I was very fortunate.” Taplin knows that not everyone is as lucky as he was, having been on the giving side of those who have needed support. Now it was his time of need. He ended up on the receiving end of Kids of Courage – the first counselor to come back as a camper. But while it was humbling, he used it as an opportunity to come to terms with his condition. On the first trip, he gave a memorable speech, the first of many. “When I woke up in the hospital, I knew I didn’t have a choice [but to be courageous]. I had one alternative and…that was to give up and die. For me that wasn’t a choice.” He had the determination get off his tracheotomy, which is nearly impossible for people who have had the same severity of lung infection, as well as the courage to try to walk again. “I have this fighter instinct, and I persevered.”

This held true for Taplin spiritually as well. “When you fight for your life…you appreciate it so much more… Either your beliefs are [challenged] or it intensifies.” With the help of friends and the support of his family, he overcame. His close-knit Jewish community was also crucial in helping him be productive and know all he has to live for.

Sitting in a hospital bed and conquering his challenges gave Taplin a reason to live and renewed his Emunah, despite the challenge. “It is a constant struggle…its not something to just take for granted.” Taplin has to stay on oxygen therapy, and his lungs don’t fully function without it, but he lives a full life despite it. He can walk short distances (aside from walking a mile and a half in the Miami marathon this month!) and is otherwise in a wheelchair. “You could think of one reason to be depressed but a hundred reasons why you should live. For me its [as simple as] oxygen. Its so important [for me] to give over that message.”

If You're Not Struggling With God, You're Missing The Point

Is "Spare the Rod Spoil The Child" Meant To Be Taken Literally?