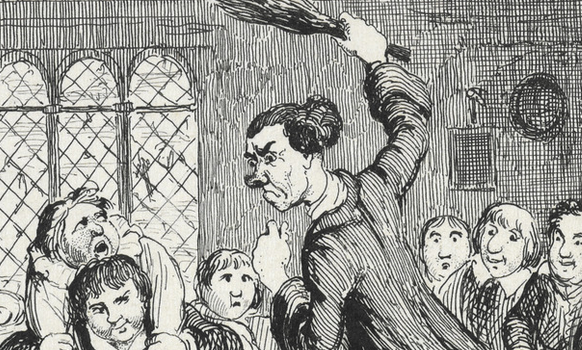 Is “Spare the Rod Spoil The Child” Meant To Be Taken Literally?

I heard that hitting kids in schools is still legal in 19 states and that unfortunately some of the most insular schools in the Orthodox world still hit kids and justify it with a Proverbs verse. Is that really what it means?

(For the benefit of those who may not know, the verse in question is Proverbs 13:24. Readers are probably familiar with it, or at least with a famous variation of it: One who spares the rod hates his son but one who loves him chastises him early.)

This verse is the source of the popular expression “spare the rod and spoil the child.” The question was, are people taking this verse too literally? How do the classical commentators explain it? Disappointingly, though perhaps not surprisingly, most of the commentators understand that it isn’t a metaphor, it literally refers to disciplining one’s child. But that still doesn’t mean that one should strike one’s child with a stick. In fact, it very much doesn’t.

You see, the Torah was written to be understood by the audience that received it. It speaks about loading donkeys, oxen treading grain, and women delivering babies on birthing stools – things to which most of us cannot relate. It doesn’t talk about DNA or black holes or flatscreen TVs because these are concepts that would have been incomprehensible to the original recipients. Similarly, if King Solomon (the author of Proverbs) wanted to discuss disciplining children, he was going to use corporal punishment as his illustration because time-outs didn’t exist, and I suspected that neither did grounding or docking allowances.

This is not just wishful thinking on my part; let’s examine the sources.

First of all, striking another person is seriously frowned upon in Judaism. Deuteronomy 25:3 tells us that someone sentenced to the penalty of lashes may not be struck more than the designated amount (a maximum of forty lashes). First the Torah tells us that “the wicked one deserves lashes” (25:2), but then we are told that we may not exceed the court-imposed amount because if we do, “your brother will be degraded.” The Sifre, quoted by Rashi on 25:3, demonstrates that before the punishment is administered, the offender is considered “wicked.” After he has paid his penalty, he is once again called “your brother” and it is forbidden to strike him. If we’re not allowed to strike a convicted criminal more than absolutely necessary, it should go without saying that we may not strike someone who was not so sentenced by the courts – not even if their behavior bothers us!

Striking someone outside of the context of court-ordered whiplashes is actually considered evil. In Exodus 2:13, Moshe asks “the wicked one,” “Why will you strike your friend?’” The Talmud in Sanhedrin (58b) points out that the person is called wicked just for raising his hand, even though he has not yet delivered a blow.

The Talmud in Moed Katan (17a) prohibits a parent spanking an older child, based on the principle that we may not do something that will cause others to sin (lifnei iver). The child might respond by cursing the parent or striking back – both serious sins – and the parent would be responsible for provoking that reaction. The Ritva (13th century) says that “older child” isn’t exhaustive. For sure one may not strike a child above the age of bar or bas mitzvah but, additionally, one may not even strike a younger child who is likely to retaliate in words or deeds. Rav Shlomo Wolbe (20th century) suggested that the cut-off for spanking would be age three.

Rav Wolbe’s position is not a mere concession to modern parenting. Peleh Yoetz (1824) says that even in the case of a young child, if the parents know that his nature is not to accept authority, they should discipline him using calm, soft tones.

True, the Rambam writes that a teacher may strike a student (Hilchos Talmud Torah 2:2) but that very same halacha specifies that he may not use a whip or a rod, but only a “small strap.” (So much for “rod” literalists!) And how big is a “small strap?” The Talmud in Baba Basra (21a) says no larger than a shoelace.

More about the Rambam’s supposed license for teachers to strike students:

We see that the Rambam – the one real source that might justify corporal punishment – is extremely limited, even by the Rambam himself! Aside from his limitation of a “small strap,” we see elsewhere that the Rambam forbids striking any innocent person, even a child (Hilchos Choveil u’Mazik 5:1). He also writes that when one feels the need to discipline his children or others, he should never do so from a place of anger. Rather, he should feign anger but remain inwardly calm (Hilchos Deios 2:3).

So, yes. “Spare the rod” literally means that we do our children a disservice if we permit them to run rampant. As King Solomon wrote, one who loves his children is quick to correct their behavior. But the “rod” part is literary license. Even if that meant a literal rod in King Solomon’s day (and I don’t know that it did), it ultimately means an appropriate form of correction in each generation. But whatever the case may be, harsher-than-necessary means are considered cruel and should therefore be avoided.

The Orthodox Jew Who Found Faith Through His Own Illness