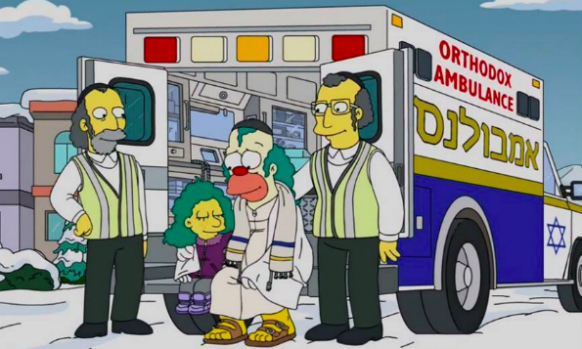 I cannot believe The Simpsons are STILL on television, since I was watching them back when I had braces and now have four children, two of whom are old enough to have braces! Being that it’s season TWENTY-EIGHT, you can imagine that the writers have needed lots of ideas over the years to fill up so many episodes. During choir practice in ninth grade, my best friend Sara and I came up with an episode where the Simpsons would visit Itchy and Scratchy Land. A year later, such an episode aired. In 2000, The Simpsons had an episode where Donald Trump became president, in 2016, the U.S. followed suit!

With all the twists and turns this series has taken (it’s been decades since I watched it!) I was delighted to hear that on last night’s episode, “The Night After Krustmas,” as Rabbi Eliyahu Fink pointed out on Facebook, Hatzolah the Orthodox Jewish ambulance corps, came to Springfield.

I did not watch the episode and the short blurb I found online did not give too much insight into how and why this band of religious Jews came to town, but my takeaway is that it’s nice to see that this is something the Orthodox Jewish community has become known for. When I was making my transition from Conservative to Orthodox back in high school, an observant Jewish family from my synagogue essentially staged an intervention where they tried to stop me from crossing that line.

“We’re kosher,” they told me, “We observe Shabbat,” they continued. “If you become Orthodox, you’ll become a rock thrower.” What a busha, that extremists within the Orthodox community did this awful thing enough times to make people from without think that throwing rocks is somehow a normative part of Orthodox Judaism. At the same time, what nachas we should feel to have such dedicated members of Hatzolah in our community, who are often first on the scene and happily serve anyone in need, and have also become a thing we are known for.

Since The Simpsons may outlast us all at this rate, may we merit to only have positive representations there and in all of TVLand.