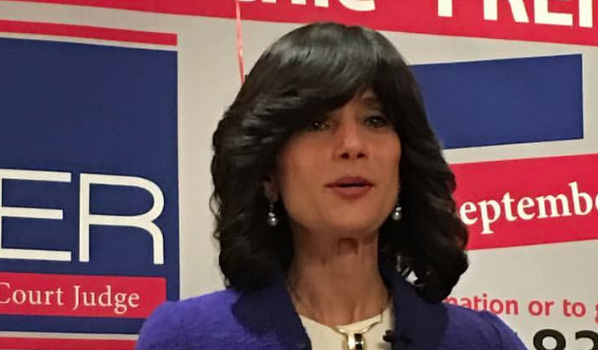 Though hasidic Jews are known for wearing black, when Ruchie Freier dons her judge’s robe this January as a Civil Court judge in Brooklyn, she’ll be making history. Freier, who was born and raised hasidic in Boro Park, always dreamed of being a lawyer. During Freier’s childhood, though, such things were simply not done. Her local Beis Yakov school prepared women to be involved with law in a different way through a legal stenography course. Freier loved the class, and upon graduation in 1982, she become a legal secretary so that she could support her husband as he sat and learned Torah – another one of her dreams.

While she kept on advancing in her job, at a certain point Freier realized that the lawyers she was working for were younger than she was and that something wasn’t right about that! Despite already having three children and being thirty years old, Freier decided that it was time for her to enroll in college. She attended Touro over the course of the next six years, by graduation had six kids, and was one step closer to realizing her dream.

She got into Brooklyn Law School, which took her four years to complete, as she juggled school, her home and family. She had a background in real estate, so she thought she might work in that area, but was worried about getting clients. To her surprise, when word got out that there was a Yiddish-speaking hasidic woman lawyer, clients started flocking to her, and she opened up a private practice.

Because a hasidic woman attending law school was so unheard of when she did it, the path unknown, she made a little deal with God. “If you help me never to compromise my standards as a hasidic woman, any organization that comes to me for help, I’ll find a way to help them.” Freier’s prayer was granted and she was ready to be there for anyone in need. So besides being a lawyer, wife and mother to a large family, she began to get involved in the non-profit sphere too.

First Freier helped youth at risk, then she was approached by a group of women who had been turned away from being EMT’s for thirty years because in her community there simply was no place for female EMT’s. Freier decided that women should have a chance to serve the community in this way too, if they chose, so she launched Ezras Nashim, the first all female Orthodox Jewish ambulance corps.

Freier trained to be an EMT with her mother and loved it so much, she decided she was also going to become a paramedic, which took over a year in training. If Freier’s plate sounds full at that point, there was still more to come. For years her uncle, David Schmidt, had been a Civil Court judge in Brooklyn. He told her that when he retired, it would be her chance to run.

Last fall, Ruchie found out the seat would be opening, but learned that she’d be running against another Orthodox Jew. Unsure what to do, she decided to simply trust in Hashem. If it was His will for her to win, she would. As her paramedic course wrapped up, she was making a wedding for her daughter. Once the sheva brachos ended in early April, she made the announcement that she’d be running for the Civil Court Judgeship.

Though Freier has received overwhelming support from the community, including rabbinic leaders, she has faced the naysayers who have told her that she wouldn’t be successful. To the haters, Freier has always wondered “Do you have some direct line, some number to God that I don’t have? Because I was never told this!”

Freier, who is now a grandmother, explains that big things don’t happen overnight and that people need to be patient and never compromise their standards or their dreams. When you are true to who you are, people trust you. Freier’s faith has helped her all along her journey, “If you believe that Hashem runs the world, what’s going to go wrong?”

The Orthodox Jews of Rugged Maniac