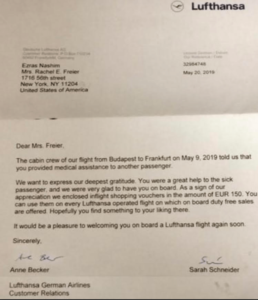 Last month, Orthodox Jewish All Star, the Honorable Judge Ruchie Freier was on her way home from Hungary with her family. It was a route she is familiar with as she travels to Kerestir, Hungary every year to pray by the grave of Reb Shayala of Kerestir on his yahrzeit, a practice that is common among many Hasidic Jews. But this time, she had the unexpected opportunity to help save a life and make a tremendous kiddush Hashem.

After leaving the airport in Budapest, the journey back to New York started out uneventfully. The Lufthansa flight contained mostly German citizens going to Frankfurt. Towards the end of the trip, crew announced on the loud speaker that they needed medical help. As a paramedic and the founder of Ezras Nashim, Freier relates that she quickly volunteered. When she arrived, she saw that there were no other medical professionals on board.

The flight crew was extremely stressed out and worried. “When I got there and said I’m a paramedic, they were so relieved.”  While Freier experienced some pushback at the idea of women becoming EMT’s when she was founding Ezras Nashim years ago, cases like this make it clear that there is a real value in women who are interested in emergency medical care to be trained. “Women and men equally offer something in the world of EMS, and there’s no reason why women can’t assist during medical emergencies,” Freier explains. The judge offered her assistance, and the patient was stable through the time of landing when emergency response teams took over.

Freier has offered medical help on flights before, but never received the response she did this time. “They crew just kept thanking me and thanking me and then mailed me a letter and a voucher afterwards. I never got a formal thank you letter before.” This was especially meaningful coming from a German airline. Freier is incredibly grateful she is to be able to use her EMT training to save lives. “Medical training can be helpful when there’s an emergency that no one’s expecting. There are conditions that, while not life threatening in that moment, could become life threatening if not treated correctly.”

While Freier spends her days as a judge in Civil Court in Brooklyn, sometimes her day job and her side passion mix. “I keep equipment in my chambers…One of my colleagues in court had an emergency and I was able to assist.” Freier knows that although she regularly looks for opportunities to do so, the ability to make a kiddush Hashem doesn’t just lie with her. “Being mekadesh shem shomayim is something I daven for every day.”