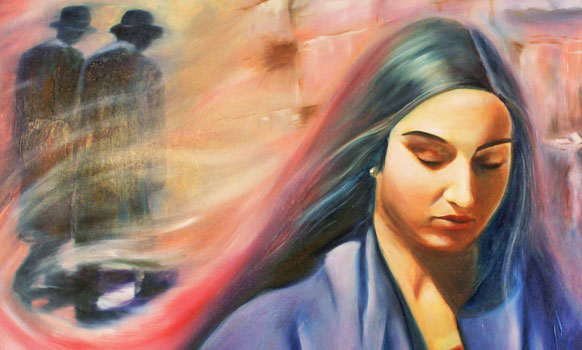 Is There A Way To Understand The Mitzvah Of Sotah That Is Less Troubling?

I’m troubled by the mitzvah of Sotah. Is there a way to understand it that’s less troubling? Why is only the woman shamed and there’s no such shaming for a man who is suspected?

People often have issues with the case of the sotah – the woman suspected of adultery in Numbers chapter 5. People envision the woman being dragged to the Temple, her mouth held open while they force feed her the “bitter waters,” and then she explodes. So much of this is wrong. First of all, the woman was not compelled to undergo the sotah process. She could choose to do so in order to prove her innocence (or if she thought she could “beat the rap”), but she could also opt out, which would be tantamount to pleading “no contest.” A woman was only compelled to drink the water once the document containing the Name of God was erased, close to the end of the process. If she was guilty, she wouldn’t explode on the spot, she would waste away over the course of a year or two, depending on her merits – and, according to the Talmud, the adulterer would also die, wherever he was.

To me, the following point is key: what did the woman drink? Just some water with a little dust sprinkled on it. It wasn’t poison. Despite the name, it wasn’t even bitter! If the woman died as a consequence of the ceremony, it was a supernatural punishment. And there was a supernatural reward if she was innocent and falsely suspected – she was guaranteed to conceive. This is the only place where God promises to supernaturally judge court cases Himself. If one believes in the divinity of the Torah, how can one complain about the punishment, as it comes directly from God? If one doesn’t believe in the divinity of the Torah, there’s no punishment to complain about! She just drinks the water and goes home – nothing would ever happen as a consequence.

If you look at the mitzvah in context, it’s actually a very good thing for the woman! Imagine a woman suspected of adultery by her husband in a Middle Eastern culture of 3,500 years ago. I don’t know much about Hittite or Jebusite jurisprudence but I would imagine it would not be too far-fetched to assume that there were cultures where “honor killings” or other forms of vigilante justice would have been meted out. This mitzvah actually gave the irate husband something to do about it, and the necessary trip to Jerusalem provided a cooling-down period in which he might drop the charges altogether. So it may seem pretty horrific when viewed through 21st-century Western goggles but our goggles are not the only ones there have ever been.

In terms of the shaming aspect, the husband can warn his wife, but he has no authority to warn random people. He can take her to the Beis HaMikdash, and divorce her if she refuses. Even if he knows who the man is and is able to find him, there’s no reason the suspected adulterer would agree to accompany him to the Beis HaMikdash. So, if guilty, the adulterer would also be punished. And the entire process was discontinued when adultery became rampant and the husbands were as guilty as the wives they were accusing. But the equity only goes so far. Dragging the suspected adulterers to the Temple would be impractical and unenforceable.

In the Middle East of 3,500 years ago (and in some places even today), a man might divorce, beat, or even execute a wife he suspected of adultery. The sotah process – while imperfect by the standards of our society – was designed to give husbands a process to follow so they would not mete out vigilante justice. Similarly, soldier might well rape a captive woman; the isha yefas toar process gave him something to do that we might think is flawed but that was designed to transition klal Yisroel from the behavior of their times to a more moral lifestyle. The same is true of many other mitzvos.

You will note that certain things have been legislated away. The sotah process was suspended even when the Beis HaMikdash was still standing. Polygamy has been prohibited, as have concubines. We don’t do yibum anymore. We understand why these things were initially permitted but we’ve grown to a point where we may no longer need them. You can see the purposes they served in helping us to get from point A to point B and they’re non-issues today.

The Rambam held that animal sacrifices served as a “halfway house” to get us from where we were to where we should be and that the Third Temple will not have them. Similarly, sotah was a huge step up from the norms of the times in which it was introduced.