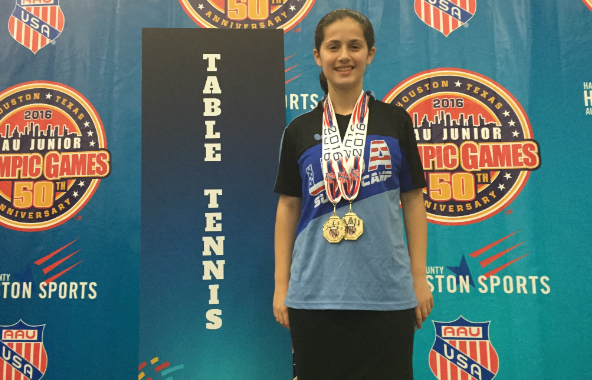 With the 2016 Rio Olympics underway, the best athletes in the world are competing for medals in their respective sports. So too at home, Junior Olympics championships are taking place. Orthodox Jewish All Star, Estee Ackerman, won two Gold Medals in Table Tennis at the AAU Junior Olympics, held a few days ago in Houston, Texas.

The AAU Junior Olympics are one of the largest multisport events for youth in the United States. 14-year-old Ackerman of West Hempstead, NY won Gold in the Under Age 16 Girls Singles Event defeating Amy Lu of Maryland, 3-1 in games in the final. In the Under Age 16 Girls Doubles Event, she teamed with Lu to win her second Gold Medal. Her ping pong summer began in Las Vegas the first week in July, where she won the Under 3700 Jr. Doubles, won a bronze medal in Jr. Girls Teams and came in ninth place in the Cadet Girls Team Trials. She was then invited to attend the USA Table Tennis “Super Camp” in Dunellen, NJ, where for two weeks, she played and practiced with 30 of the top junior players in America under the watchful eye of the best coaches in the USA.

The rising sophomore at Yeshiva University High School for Girls (also known as Central) is already highly accomplished in the world of Table Tennis. She trains up to 12 hours a week after school and on Sundays at clubs in New York City. While she started playing the game in her parents’ basement, she now travels across the country for it and has become a popular speaker at Jewish organizations in tournament locations.

Ackerman was just one of 16 women and girls of all ages who were invited to try out for the U.S. Olympic Team in the sport. Although she missed her last chance to win at the February trials in Greensboro, N.C. due to her proudly keeping Shabbat, Ackerman is continuing to train for the Tokyo Olympics in 2020. She is cheering on Team USA from home while we continue to cheer for her!