Nathan Glauber’s (z”l) Letter: A Lesson in Gratitude From A Satmar Hasid 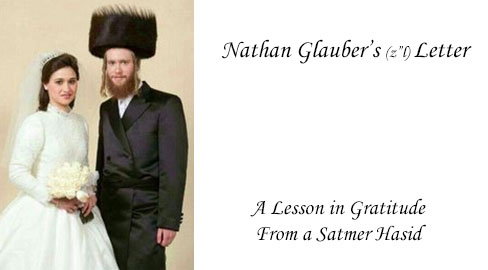 If a person relied only on recent headlines to judge the Satmar community as a whole – which I’d venture to say that most people do – they’d have a pretty negative view of it. And that’s because those who do daily acts of kindness and possess refined character traits are almost never reported on. That changed yesterday, though, when a Satmar Hasid’s beautiful words emanated beyond the grave and were published in the New York Times.

Early this past Sunday morning, Nachman (Nathan) Glauber z'”l and his wife Raizy z”l, Satmer Hasidim living in Brooklyn, were killed in a hit and run on the way to the hospital to have their first baby. Though their newborn son initially survived the car accident and was delivered via c-section, two days later, he tragically died too. In the midst of so much sorrow, a wonderful legacy from this family emerged. A letter that Nachman wrote to his parents on his wedding day – at only twenty years old – displays a maturity, humility, and deep gratitude which truly embody Jewish values, and which finally show a positive look into the Satmer world.

To my dear parents:

In these imminent joyous and highly spiritual moments of my life, when I’m heading to my chupa to begin my own family, I feel a sting in my heart that I’m already leaving your warm home.

I feel an obligation to thank you for everything you did for me since I was a small child. You did not spare time, energy and money, whether it was when I needed a private tutor to learn or an eye doctor or general encouragement. Also, later on, you helped me to succeed in my Torah studies, you sent me to yeshiva to learn your values, religious and worldly, until I reached to this current lucky moment.

Even though I’m leaving your home (actually I’m not leaving, I’m bringing in an additional family member) I want to tell you that all the education and values you taught me I’ll – with God’s help — take along with me in my new home, and continue to plant the same education in my home and kids that God will grant me.

But since kids do not grasp what parents are, and how much they do for them, and only when he matures and – with God’s help — have their own kids, they could realize it. And unfortunately I may have caused you a lot of pain; I am asking you to please forgive me.

I’m asking you, I’m dependent on your prayers, pray for me and my bride, and I will pray for you.

I pray to God that Daddy and Mommy should see lots of pride and delight from me and my special bride, until the final redemption of the Messiah.

From your son who admires and thanks you and will always love you.

What a loving home this man was raised in. What incredible values his parents imparted upon him. It is not a coincidence that Nachman turned out the way he did. His devout Jewish upbringing was surely a key factor in his crafting such a message. Hakaras hatov (acknowledging the good) that someone has done for you, otherwise known as “gratitude,” is a foundational Jewish value. In fact, it is embedded into the name of the Jewish people. The word for “Jew” in Hebrew is “Yehudi” which is based on the word “hoda’ah” which means “thank.” But hoda’ah is more than just about thanking. It’s connected to another word,“vidui,” which means “confession.” And that’s because saying “thank you” is actually an admission that a person could not have gotten to where he got to without the help of another. It’s an acknowledgment that one person lacked and the other stepped in. The more we owe a person, the harder it is to thank them, which is why our parents are two of the hardest people in the world to sincerely thank; we owe them everything. But Nachman did so voluntarily and eloquently. And in a world where so many children flagrantly disrespect their parents and live life with a sense of entitlement, Nachman’s gracious, humble words resonate with good people everywhere as pure and true.

Nachman performed his act of gratitude in private. This note was not written to prove to anyone how wonderful he was. It was meant only for his parents’ eyes which makes it even more special. But in his death, it has been released, and it is inspiring countless souls, from all walks of life, all over the world. As of now, all but two of the comments on the  New York Times article (whose readership is generally not very pro-Hasidim) are positive. That is virtually unheard of! “So much for the efficacy of prayer,” noted one of the two cynical comments. At first glance, it seems to be a fair point – such a tragic ending for such a special person? But what were Nachman’s prayers exactly? That his parents would have much pride and nachas from him until the coming of Moshiach (the Messiah). Obviously, the way that Nachman’s life came to an end is every parent’s worse nightmare, yet despite the tragedy, I am certain that Nachman’s parents do feel tremendous pride in the man that they raised: both in the way he lived his life and the legacy that he has left in his death. And I believe that Nachman Glauber’s ability to inspire and unite so many different people will hasten the coming of Moshiach, may it be speedily in our days.

Tossed Torah: Why So Many Jews Are Willing To Let Go Of Their Heritage

My Self-Doubting Ended The Day I Realized This