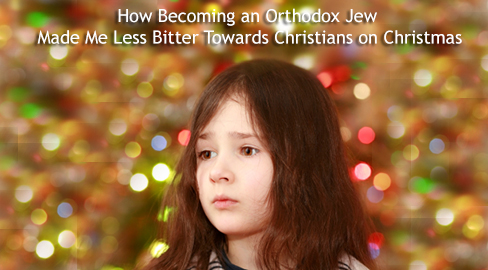 Growing up as a Conservative Jew and being one of the only Jewish kids in my public school, the holiday season always stuck in my craw. My parents tried to make Chanukah fun for my sisters and me, and while it was, it didn’t compare to the focus that the world put on Christmas. No matter how many latkes we ate or presents we got, it couldn’t take away the feeling of being excluded. By the time high school arrived, I was downright bitter. The students in our (non-sectarian) private school were encouraged by the administration to decorate their lockers for the holidays and so about a month before Christmas, the word “festive” started being used by my classmates as excessively as the tinsel was strewn around the hallways. I didn’t want to decorate for Chanukah, though. I knew that Chanukah wasn’t a “major holiday,” and therefore felt that making a big deal about it would only be an attempt to compete with Christmas which seemed wrong. So I left my locker undecorated and simply grumbled at everyone else’s holiday cheer.

Fast forward fifteen years, I’m now Orthodox, and people likely expect I would be more close-minded than when I was as a secular Jew, but the opposite has happened. It occurred to me recently that all that negativity I used to feel during the holiday season is a non-issue since I became religious. That’s not to say that I’ve started going caroling or taking my kids to see Santa – far from it – but it doesn’t make me bitter to see Christians who do. I’ve been trying to figure out why that is.

We all know Adam Sandler’s The Chanukah Song, “When you feel like the only kid in town without a Christmas tree, here’s a list of people who are Jewish, just like you and me…” Adam was probably raised very similarly to how we were raised. My mom didn’t put her list to music, but one of the core ways she tried to instill Jewish pride in her kids was to tell us how many successful Jews there were in the world. Her list had some celebrities on it too, but she focused more on the doctors, lawyers, and Nobel Laureates.

And while there’s something to be said about recognizing how uniquely accomplished our people is – I think it can be a point of emunah (faith) building as it really doesn’t make sense that such a small, battered people would be able to accomplish so much – Jewish pride based on The Chanukah Song ultimately falls flat. The truth is that it’s thin and insubstantial compared to the sense of tradition, family, and celebration a Jew sees in the world around her this time of year.

But all of those feelings of exclusion that I had growing up thankfully don’t exist for me anymore, or for my kids. Why is that? Because we are immersed in a thriving Jewish community, Torah learning, and Jewish living. Because the Chanukah, which we just finished celebrating, isn’t just about seven more days of presents than the Christians kids get (which was mostly how it felt as a kid). It’s about forming a relationship with a God who makes miracles for us and who strengthens us when we’re weak. It’s about fighting to hold onto our Jewish observance and heritage at all costs.  My kids don’t feel like “the only kid in town without a Christmas tree” because Orthodox communities are built around shuls, so our neighborhood is full of religious Jews, and since my kids go to Jewish day school, their friends are Jewish.

They know that Christmas is happening – we are part of the larger world too – but what they’re more focused on is the fact that it was Shabbos a couple days ago and in a couple more days, we’ll be getting ready for next Shabbos: who we’re inviting, what goodies I’ll be preparing, etc. What it comes down to is that when you’re  busy with your own heritage and faith, you have no reason to look outward at someone else’s and feel jealous or bitter. We’re full of Jewish learning and living, and it’s the most wonderful thing in the world!

Excerpt of My "Orthodox Jewish All Stars" Premier Speech