Excerpt of My “Orthodox Jewish All Stars” Premier Speech 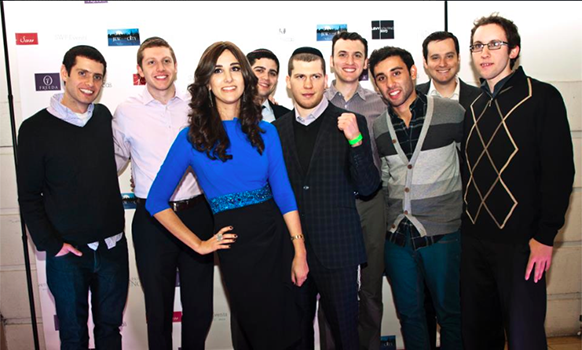 Looking around this room, I am awed by this THING Jew in the City has become. By the enchanted road that brought us here – a modern day Chanukah miracle — and the magical path that we are now embarking on. It is bigger than all of us, and is powered by Something greater than any of us.

It’s so exciting to see how an idea has turned into a movement. Almost seven years ago to the day, after being interviewed by a journalist about being an Orthodox Jew, I was struck by how wrong all of her information about me was and I suddenly understood just how much the whole world misunderstands us.

Fast forward seven years. JITC’s mission is beginning to take hold and it is changing what Orthodox means to people every day. We are closing in on a million video views. We have thousands of dedicated social media followers – including many of you – who receive and spread the message that Orthodox Jews are fun, relatable, and come in all different colors and stripes, and at the same time that we are seeking to find spiritual fulfillment, become better people, and connect with something greater than ourselves—things that are so lacking in so much of popular culture and that I truly believe every Jew is thirsting for, if he or she just strips away the everyday distractions and thinks about the purpose and meaning of life.

And the world is taking notice. People write in nearly every day—Jews and non-Jews, Orthodox, Conservative, Reform, unaffiliated, young and old, from around the world, to say that our message is resonating with them, that they have been changed for the better, to better understand Orthodox Jews and Judaism, to change their misconceptions and preconceived biases, to be strengthened in their own observance, to feel prouder and more connected to their Jewish heritage. We have been written up in publications ranging from The Daily Beast to the Jewish Press and everything in between.

Let’s face it – the people here tonight already know there’s no contradiction between being cool and normal and relatable and being Orthodox. We already know that elevating our lives with Torah thought and practices builds something real that fortifies us to do some of the remarkable things that our video highlights.  And it’s good to be reminded and reaffirmed in that knowledge.  But what this night celebrates is the fact that our latest effort—our most ambitious to date—is spreading our message and our mission wider than ever before.  Forty thousand views and counting and countless perceptions changed already, and it’s only been four days! It is for the world to see now – that being frum does not mean circumscribing ourselves into tiny little identical boxes.  And that we each bring something different to the world.   That our practice fortifies us, and in no real way limits us.

This video celebrates freedom – Chanukah is about freedom and contrary to popular belief, Orthodoxy is freedom – it is freedom to seek our path in an elevated way, to become what we are meant to become, the best possible version of ourselves — in a way that is true and fine and full of substance.  And the message is getting out, and I know – and some of you already know – what a difference it is making.  It is bringing us all closer together, and shining a light on a road that’s maybe less traveled, but one which holds something REAL and DEEP and BEAUTIFUL and TRUE.