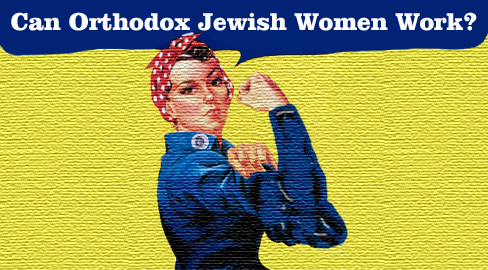 “I’d like to be more religious, but having a career is very important to me. If I became Orthodox, I wouldn’t be allowed to work,” Rachel explained to me over the phone.

“Really?” I responded. “Which commandment in the Torah states, ‘thou shall not work if you’re a woman?'”

Rachel, of course, had no source to back up her claim because there is no prohibition in Jewish law for a woman to work. A man is commanded to support his family, but for a woman – there is a choice. The ironic thing is that in my Conservative family growing up, my mother never worked, mostly because my non-religious, but traditionally-minded (read, slightly chauvinistic) father didn’t want her to. (Fear not! Since my father – like the rest of my family – became Orthodox, he has become much more sensitive to women’s issues!)

Growing up in a single-income home made me not so career oriented myself. Ivy League college was a goal. THAT was something my parents stressed, so that was something I worked towards. But graduate school or a fancy career afterwards was never particularly on my radar, so much so that at one point in high school, I dreamed of getting into Harvard and then getting straight C’s. Why? Because it was the end of the line in my mind.

Many of the Orthodox women I know – who were raised religious – are more career oriented that I ever was. Probably because they were getting a different message growing up than I did. Another point of irony: my husband who was not only raised Orthodox, but Hasidic even, told me after we were married that he had always assumed he’d marry some big career woman – like a doctor or lawyer type. And little old, formerly bacon-eating me never DREAMED of going down such a road!

I don’t know if there was ever a period in Jewish history (like secular history) that women didn’t work outside the home, but even as far back as the Bible, we see King Solomon, who speaks of the ideal woman – the “woman of valor” – as a businesswoman! “She plans for a field, and buys it. With the fruit of her hands she plants a vineyard…She knows that her merchandise is good.”

How prevalent are working women in the Orthodox world nowadays? I’d venture to say that the majority of Orthodox women – from across the spectrum of Orthodoxy – have jobs beyond their homes and families. In many cases, it’s an economic necessity. In lots of cases, it’s a matter of a woman wanting to contribute her talents to the world and have an outlet outside of her kids. The role of the woman as the spiritual foundation of the home still exists – but some women want, need (or both) to work outside of the home as well.

In the ultra-Orthodox (yeshivish/Lithuanian) circles, where in many households the couple has decided that the husband will learn Torah full time, the woman is the sole bread winner. This set up only works if the woman is happy with the arrangement. I’m sure there are instances where women are the sole bread winners, but are not happy about their situation, but according to the women’s marriage contract (ketuba) a husband must support his wife and family unless she lets him off the hook.

The most common careers are probably in areas like education and therapies (OT and PT) because of the amount of schooling required and the flexibility of the schedules. But there are many Orthodox women who have less “typical” careers too. I opened the question up to JITC fans on Facebook, to see what interesting careers Orthodox women they knew had, and I was overwhelmed by the diversity and success of women in fields including:

Someone noted that most women must have gotten into these atypical careers before they became observant. Of course, there is some truth to that. But that’s not a women only phenomenon. Nevertheless, higher education is being valued more and more within the Orthodox world, so many people who were born and raised religious have opportunities for exciting careers. The first group to embrace secular knowledge was Modern Orthodoxy – who as part of the Yeshiva University (YU) community – believe in the concept of “Torah U’Maddah” – Torah with Secular knowledge, or in other words, one’s knowledge of Torah can be enhanced with (kosher forms of) knowledge and exposure to the secular world.

There is another camp, to the right of YU, who is not as keen on secular knowledge for the sake of enhancing one’s Torah experience, but recognizes that higher education is necessary in order to secure a parnassa (livelihood). This camp believes in the principle of “Torah eem Derech Eretz,” based on Rav Shimshon Rafael Hirsch’s teaching that, Torah needs to be balanced with a livelihood.

There are then groups, to the right of this camp that in theory do not believe in higher education, so most of the community members have jobs in businesses or areas that require vocational training rather than academic degrees, but nevertheless, exceptions to the rule exist, as hasidic attorneys and doctors are out there and even some hasidim with multiple PhDs! (There is apparently a Satmar woman, married to the head of a yeshiva who has two PhDs, seven kids, and is the chairman of a university department!)

How do these Orthodox career women “do it all” with generally larger families than non-Orthodox women and weekly preparation for Shabbos needed? They work hard. They recognize that life is a struggle. There’s no simple answer. But what should be known is that although people often associate religious Judaism as a thing that holds you back – especially if you’re a woman – that phenomenon of the working mother trying to figure out “have it all” is all over the place – including the Orthodox world.

Where's The Line Between Tznius (Modest) and Sexy?

Juicy Gossip: Are The Words That Leave Your Mouth As Kosher As The Food That Goes In?