Where’s The Line Between Tznius (Modest) and Sexy? 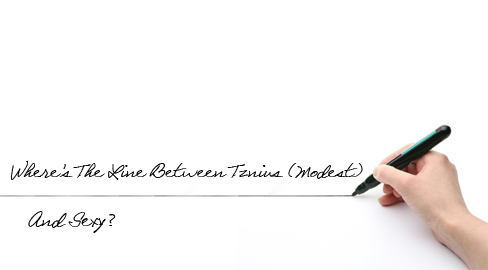 I recently watched a video about “tznius sexy” and was wondering your thoughts. I was wondering what the connection is between looking good (beautiful) and dressing modestly? Can you dress beautifully, modernly, and womanly (not hiding the fact you are a women) and be modest at the same time? Where is the line between dressing like a woman and being sexy or is it as long as you follow the laws of halacha in regards to dress, you are not being sexy? If sexy means dressing womanly; does that mean there is no problem with being sexy? As, if you are looking womanly and beautiful, isn’t that sexually arousing even if covering the correct parts of the body? Thanks for your advice, just confused about where the line is and where it isn’t.

Thanks for your question. In terms of where should you draw the line between tznius and sexy – I’d say your bedroom door! I know exactly what video you’re referring to – I was actually interviewed for the article that accompanied the video on The Forward (which you can see on the Press page). As I explained there, we’re not supposed to dress (or act) in a sexual way in a public setting. That’s just not what Jewish modesty is about.

If you want to say that there is a mystique about modesty which has a certain sexiness to it, perhaps we can say that. But honestly, the term “tznius sexy” kind of bugs me. The word “sexy” itself is not a tznius word. Not that it’s a bad word – it’s just something that’s meant to be kept between a husband and wife. Unfortunately, nowadays, “sexy” seems to be attached to everyone and everything, but when everything is sexy, nothing is sexy.

How about trying to enhance one’s appearance through makeup, stylish clothing, and jewelry, though? Is that allowed if you’re an Orthodox Jewish woman? While you can find some strains within Orthodoxy where the women seem to do less to enhance their physical appearance, there are many groups that believe that it’s fine, even commendable to look attractive and put together. If we look to the Torah itself, we see that although the Torah never wastes a single word, it mentions that three out of the four imahos (foremothers) are “tovas mar-eh” beautiful to look at.  Sarah was even known as “Yiskah,” which according to the Biblical commentator Rashi comes from the word “sokhah” (gaze), which is what people did when they saw her great beauty.

Other beautiful women are mentioned throughout Tanach (the Jewish Bible), the most famous of which is Queen Esther, whose looks were so remarkable, she beat out women from 127 countries in a beauty pageant! These heroines all had inner beauty as well, but we shouldn’t believe that they only had inner beauty since their physiques attracted the likes of Pharaoh and Achashveirosh.

So according to Tanach, looking beautiful, even incredibly beautiful is OK and need not be overtly sexy. But practically speaking, where is the line between tznius and sexy? The rabbis gave us some guidelines in the Talmud in terms of what parts must be covered, but that’s where they stopped. And that’s probably because there’s no good way to describe how tight is too tight, how clingy is too clingy, and even how thick a fabric must be to be thick enough. The same clothing fits differently on different women and even differently on the same woman depending on her weight or if she’s pregnant or nursing.

A woman must take an honest look at herself, and be God-fearing (aware that God knows her true intentions), and maybe enlist the help of a trusted friend to determine if she’s gone from attractive and womanly to overtly sexual. Edith Head, a famous Jewish American costume designer once said, “Your dresses should be fitted enough to show you’re a woman and loose enough to show you’re a lady.” I don’t know if Edith Head came from an observant family but this idea is inline with Torah thinking – look beautiful but refined.

But what if a man finds a woman’s refined beauty arousing? Well, just as the Talmud instructs a woman in terms of what to cover, it instructs a man about what not to gaze at and explains that a man could become aroused by a pinky! What this means is that a man is capable of finding virtually any part of a woman arousing and that some of the onus falls on him. Just as a woman must do her part to keep things classy, a man has to do his part to keep his eyes and thoughts in the right place.

As a person who considers herself centrist Orthodox, I am constantly trying to strike a balance in every area of life which requires constant scrutiny, intellectual honesty, having friends with similar values to runs things by, and a close relationship with a rabbi and or mentor who to regularly go to for questions and advice. So in effect, the “line” you ask about is not anything that is able to be defined, but can achieved through continued effort and guidance.