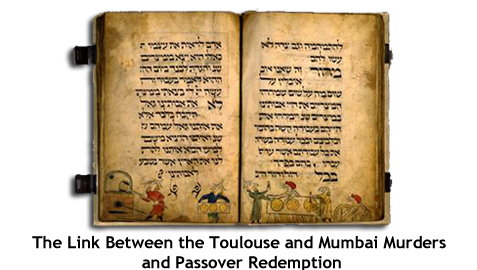 For not just one alone has risen against us to destroy us, but in every generation they rise against us to destroy us…We will soon be saying these words at the Passover seder, but they ring so true right now. The murder of three Jewish children and a young rabbi in Toulouse this week was not a random killing by a deranged gunmen, but rather a calculated act of hatred by an anti-Semite. A man so evil, he gunned down (at point-blank range) three innocent children and a father, who was guilty of nothing more than dropping his kids off to school.

These murders are indirectly connected to another set of Jewish murders – the terror attack on the Chabad of Mumbai from three years ago. You see, the younger son of this now decimated Sandler family bore the name Gabi, which he was given in memory of Rabbi Gavriel Holtzberg, who was also murdered for being a Jew. This connection is especially chilling to me as we too added the name “Gavriel” to our three year old son’s name in memory of Rabbi Holtzberg.

…and the Holy One, blessed be He, saves us from their hand. How can the haggadah conclude the verse with this claim? Yes, of course we see that in every generation there are those who destroy us, but where is the Godly salvation in every generation? Where is the Divine help? Children are dying. Jewish blood is being spilled all over the world. Shouldn’t the verse really end with, “and the Holy One, blessed be He, sometimes save us and sometimes doesn’t?”

I believe that the answer lies in the meaning of the shared name from these tragedies – Gavriel, which means “God is my strength.” For how did the grieving mother and widow respond to this heinous act that ripped her family apart forever? Did she curse the God who let this happen or simply deny His existence? No, all this righteous woman did was request that the Jewish people “keep the mitzvos and become one with the words of the Torah.”

“The pain is great. It’s difficult to describe and it’s difficult to cope, but we are coping with our faith,” explained the grandfather of the murdered Sandler children. “We are believers and the children of believers, and we do not challenge Hashem.”

The agony these families are going through is incomprehensible, yet they are garnering strength through faith in the Almighty. The families of the slain Fogels and slain Holtzbergs too found their strength in God in the face of unspeakable horror. How little it takes to undo a person who lacks in faith, to turn him into a bitter, negative person who feels as though the world is out to get him. How invincible is a person who believes in a purposeful world being guided by a loving Creator. Baruch Hagever Asher Yiftach Bashem V’Haya Hashem Miftacho. (Blessed is the man who trusts in God, then God will be his security.)

We have no prophets in this day and age and some fear that Jewish leadership is at all time low, yet as we wait and pray for a national redemption, these regular people, these holy survivors are beacons of light onto our nation, instructing us not only through words, but through tremendous displays of faith: when we trust in God, we are able to create our own personal redemption.

Hashem is my light and my salvation; who shall I fear? Hashem is the stronghold of my life; who should I be afraid of? When evildoers approach me to devour my flesh, my adversaries and my enemies against me – they stumble and fall. If an army would encamp against me, my heart would not fear; if a war were to rise against me, in this I trust. The one thing I ask of Hashem – all that I seek – that I may sit in the house of Hashem, all the days of my life. To behold Hashem’s pleasantness and to meditate in His sanctuary. (Psalm 27)

Yom HaShoah: The Only Way To Achieve "Never Again"