Yom HaShoah: The Only Way To Achieve “Never Again” 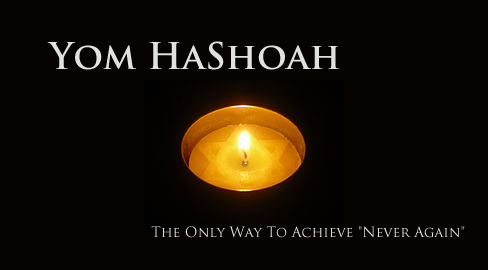 I spent much of my childhood wishing that I had Holocaust survivors in my family. Now before you completely judge me for having such an insane wish, hear me out. I was raised to be a proud Jew, but did not have much of a foundation for that pride. Our minimal observance occurred only when it was convenient to observe, and despite going to Hebrew school and having a bat mitzvah, I knew next to nothing about Judaism. So a large part of my Jewish identity stemmed from Holocaust awareness and a connection to the State of Israel.

Some of my friends and classmates had survivors in their family. Others had relatives who lived in Israel. The “lucky” ones had both. I had neither, and frankly, it made me feel like less of a Jew at times. Every year at the Holocaust Awareness assembly in my public school, the kids who were the grandchildren of survivors got to go up on stage and be part of the presentation. There weren’t too many Jews in my grade – never more than a handful – and not getting to be a part of the assembly made me feel like it wasn’t my history as much as it was the theirs, and I longed to be a part of the collective Jewish experience.

By the time I was a teenager, the Holocaust was a serious reason to doubt God’s existence. I had never been given any reasons to believe in God, but how could I not doubt the existence of a God who let such atrocities happen to His people? It was only after I discovered Torah learning and observant living, later in my teens, that I began to understand that it’s possible for a loving God to allow awful things happen in the world. If God is truly God, then His ways, by definition, will always be beyond our comprehension.

Though I would never judge a survivor for losing faith (having never endured the Holocaust myself), as an adult, I’ve come to see that emunah (faith) exists in large part due to choice. And it’s the people who lived through the hell of the Holocaust (and other hardships), yet cling to their faith, that inspire me most. Choosing faith is all I can do to stay sane in such an insane world and raise children in it. Trusting in God, whose plan may not always make sense to me, is the only way I can make sense out of so much pain.

On Yom HaShoah – Holocaust Remembrance Day – we say “Never Again.” But those words, in light of the last two thousand years of Jewish history, which began with the murder of a million Jews at the destruction of the Second Temple (see chart below for the rest), are pretty empty. Though most of Jews feel quite secure in the world today, if history repeats itself, which history often does, it’s not “Never Again” but rather, “When?” Nobody wants to think about this, especially on a day like Yom HaShoah, but I believe that our sense of security is false.

As a person who puts herself out there publicly as a Jew, I can tell you that there is plenty of anti-Semitism still left in the world. Every day or two, I get a message or comment on one of Jew in the City’s many social media platforms, from a person somewhere out there, who wants to let me know that he or she is waiting for the next Auschwitz. That Hitler’s work must still be finished.

But since I’m a person of faith, I live with hope. And I believe that  “Never Again” is possible – just not in the current state of the world. History will only stop repeating itself when we change the course of history by finally getting ourselves out of galus (exile). The formula for ending our galus is clear. We must each improve ourselves and return to Jewish tradition.

It’s ironic, that events like the Holocaust cause so many to lose faith and break with observance when the best chance we have to avoid a future Holocaust is to do just the opposite, but that is one of the many challenges we face. I won’t deny that the Utopian world (yamos hamoshiach) that Jewish tradition speaks of is hard to imagine, even for a religious person like me. Believing in world peace and the universal recognition of God seems to defy reason. But, then again, so does the chart below: that our people could be so hated and pursued in every generation, yet could have survived it all without there being a larger Purpose.

Confronted with two different types of illogical situations, I choose to believe in the one that’s in accordance with my tradition and I choose to live as a Jew and pass our beautiful heritage onto my children. Because if the new reality that I hope and pray for doesn’t ever come about, then chances are that either I, my children or my children’s children could one day die as Jews. So in the meantime, we will keep on living proudly (but this time with a foundation of knowledge, observance, and faith)  as Jews.