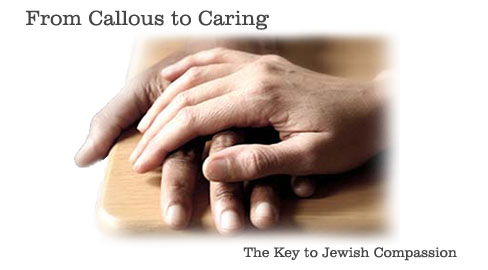 I never thought of myself  as a callous person, and yet, I can’t deny that there were times when I was just too “busy” to stop and treat certain situations with the importance they deserved. Like on the morning of September 11, 2001, when my mom (who has a tendency to over-worry) called to report that a plane had crashed into the World Trade Center.

She was certain that something bad was happening, but in a I’m-a-too-busy-New-Yorker-who-can’t-be-bothered-with-your-conspiracy-theories kind of way, I brushed her off and said I had to go or I’d be late for class. Of course, when I tried to hop onto a bus to get to said class, the cop, who had closed down the street in order to keep the roads open for emergency vehicles, looked at me like I was crazy. “Didn’t you hear that two planes crashed into the World Trade Center, lady?”

I also used to have a tendency to ignore emails with prayer requests in them. It’s not that I wanted anything bad to happen to the sick people who needed the prayer, God forbid. There was just a lack of a connection in seeing a stranger’s name and feeling compelled to stop what I was doing and pray for him. I was busy. I had “things” to get to.

But then, seven years ago, my mother was diagnosed with two cancers. (Thank God, neither cancer has progressed in any real way, and she continues to remain healthy.) Suddenly, the bad news I was receiving was extremely personal. And it occurred to me that bad news is always extremely personal – just for another person.

So how do we take a stranger’s pain and make it our own? The secret can be found in the Hebrew word for compassion“rachamim,” which is connected to word “rechem,” meaning womb. When you think about it, a fetus is not only a stranger to its mother – it’s a parasitic one at that! And yet a woman feels an automatic connection to this being, even though she has never met it, has only been disturbed by it, and knows none of its redeeming characteristics yet.

Despite all that, in any normal situation, the bond is undeniable. Her love and concern for this person she has never laid eyes on is one of the most profound connections that exists.

As an old Hasidic tale goes, a rabbi once asked his students how they could tell when the night had ended and the day had begun.

“Is it when you can see an animal in the distance and can distinguish whether it’s a sheep or a dog?” asked one student.

“No,” answered the rabbi.

“Is it when you can look at a tree from a distance and tell whether it’s a fig tree or a peach tree?” asked another student.

“No,” replied the rabbi.

“Then what is it?” the students demanded.

“It is when you can look upon the face of any man or woman and see this it is your sister or brother. Because if you cannot see this, it is still night.”

I’m no less busy than I was before my mother’s diagnosis, in fact, I’m far busier. But now when I get a prayer request, no matter what I”m doing, I stop, say the sick person’s Hebrew name and his (or her) mother’s Hebrew name out loud (which has a certain spiritual power), and ask God to give the person a refuah sheleimah (a complete recovery).

I haven’t reached the level of tapping into the pain I felt when it was my own mother on the line, though I hope to get that point one day. But in the mean time, I’ve committed to taking a moment and sincerely beseeching God to heal this person in need. Life is busy, but somethings are just more important.