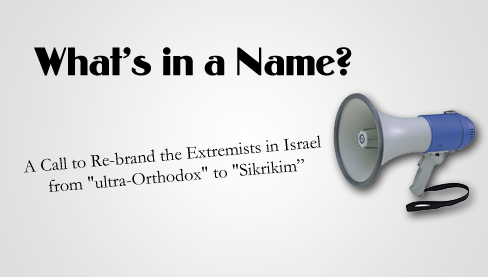 Over the course of Jewish history, groups of Jews have occasionally splintered off from mainstream Torah Judaism, in terms of theology and observance. For example, in the Second Temple period, there were the Sadducees and the Essenes. In the early middle ages there were the Karaites. And in modern times, Jews have broken off to form non-Orthodox denominations. While the system of halacha (Jewish law) has many paths within it (i.e., there is often more than one halachically valid answer to a question), at a certain point, an idea or practice is simply outside the scope of normative Torah belief and observance.

There is a group of Jews in Israel, who while still being referred to as “ultra-Orthodox” by the media, can no longer be considered part of mainstream Torah Judaism. They have conveniently given themselves a new name–“Sikrikim”–and we should only refer to them by this name from now on too.

The original Sikrikim were a group of zealots called “Sicarii” (dagger-men) who lived in the time preceding the destruction of the Second Temple. The Sikrikim of old attempted to expel the Romans and their partisans from Judea using concealed daggers and other forms of violence. The modern-day Sikrikim believe in violence too–specifically, they police other Jewish people’s level of observance through verbal harassment, spitting, physical assaults, and by throwing things like rocks, garbage, and bleach at Jews who they believe are not stringent enough in their observance.

Someone recently asked me how do we explain how far is “too far.” Where do we draw the line between very stringently observant and outside of observance? I think the answer simply is that if you wouldn’t feel safe walking down the street with someone, you are not sharing the street with a Torah observant Jew.

The Sikrikim’s actions have left many people wondering about modesty issues in terms of buses where men and women sit separately and women being cropped out of newspaper photos. Although in my circles we ride mixed buses and buy newspapers with women in them, I personally think we should let each community decide for itself what works for it as long as the stringencies do not lead to a place outside of Jewish law. Ultra-modest practices do not necessarily result in violence. Meaning, you can be a mentsch even if you’re part of a more stringent community.

I have firsthand experience with this as I once rode a men’s-only bus in Israel. (Accidentally, of course!) I was in seminary at the time, doing my weekly chesed (volunteering) project, and the bus I needed just wasn’t passing by. After waiting around for longer than I could handle, I decided that I would simply get on whatever bus came next. I reasoned that being anywhere was better than staying at that bus stop. So when the next bus passed by, I hopped on.

It was not terribly crowded, just a few men sitting throughout it. I had no idea that men’s-only buses existed, nor did I see a sign saying that I was getting onto a men’s-only bus, nor did anyone on the bus even attempt to ask me to leave. I rode the bus, uneventfully, for about twenty minutes, until I reached Jerusalem and some girls I knew saw me getting off the bus and asked me what on earth I was doing on it!

The men I rode with that day were ultra-Orthodox – not Sikrikim. How do I know? Because they left me alone, even though I wasn’t conforming to their community’s standards of modesty. The edges of Orthodox Judaism are hard to define. There’s an on-going debate on the left-wing border concerning women’s issues. How far can halacha move if people do things that are not technically outside the law, yet have no precedent? On the right-wing border of Orthodoxy, we see the flip side of the same debate. More and more modesty and segregation is not against the letter of the law, and yet there is a lack of precedent (mesorah) for some of these practices. The issues on both sides of the spectrum are complex and have valid arguments for and against.

But if the Torah standing on one foot, as Rabbi Hillel famously stated, is “not doing to your neighbor what is hurtful to you”–and if the Torah’s ways, as described in Proverbs “are pleasant and its paths are those of peace”–then we should not hesitate to recognize that these Sikrikim are the newest group to splinter off from Torah Judaism. Their ideology of violence and coercion are beyond the pale, and we should make every effort to call them only by their self-designated name until this group comes to be recognized as outside of Orthodox Judaism.

Why is this so important? As someone who has made it my life’s work to show the world authentic Orthodox Jews and Judaism, you can imagine the horror I felt after recently receiving this message:

I’m now an orthodox Jew hater. Never had a problem with Jews before, my best friend growing up was Jewish, and I celebrated Hannukah with him. Today, I have absolute hatred for Orthodox Jews. I’m sorry, you can believe what you want, but when I see a story about Grown men SPITTING ON AN 8 YEAR OLD GIRL AND CALLING HER A PROSTITUTE FOR NO REASON, I just have to hate. Sorry, but your stupid, irrational, archaic, dumb beliefs do not give the right to abuse and traumatize, for life, an innocent child. Shame on you. If you believe in hell that’s where you are going fools, because no god in the universe would be ok with the crap I see orthodox jews doing.

The Sikrikim are not a few “isolated” con-artists who happen to look like religious Jews. This is not “one case” of a man who is a child molester and unfortunately received rabbinic ordination too. These are not just a “few bad apples.” This is a group. This is an ideology, and it is foreign to our Torah values. We must protect ourselves and our children–and the good name of Orthodox Jews everywhere–against these extremists. Perhaps one day, we can reach out to some of them and bring them back to our ways of peace. But in the meantime, please share this post and help spread the word. These people are not Orthodox Jews.