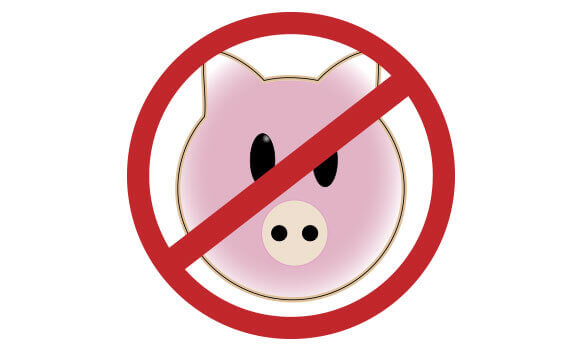 I don’t mean to sound disrespectful, but do you really think that just because you abstain from eating pork and the animal is killed in a certain fashion that brings you real closeness to God? Jesus said that nothing from the outside can make you “unclean,” only your inner thoughts and actions.

In a vacuum, not eating pork or only eating animals that were slaughtered in a certain way might not seem like they would bring a person closer to God. The reason observant Jews believe that they do is because we believe God told us to!

Though I’m not a Christian theologian, I have a basic understanding that Jesus’s philosophy, as recorded in the Christian bible, was that circumcision should no longer be of the body but only of the heart. In other words, the only thing that matters is what one believes, not what one does.

The problem with that kind of logic, according to Jewish thought, is that the Torah, in fact, tells us otherwise. We’re commanded to do many things, like circumcise a baby boy on his eighth day, refrain from eat pork and shellfish and eat only kosher animals that were slaughtered according to Jewish law. So while Jesus may have said that “nothing from the outside can make you “unclean,” only your inner thoughts and actions [can],” all we Jews are doing is following the same Torah that Jesus agreed was God-given.

The difference between our views and those of Christians is that in sefer Devarim (the book of Deuteronomy) when it says things like, “…[They should] observe all My commandments all the days, so that it should be good for them and for their children forever,” and “the entire word that I command you…you shall not subtract from it,” observant Jews take these verses to mean that the Torah applies to all Jews in all times, and that it’s not ever supposed to be changed.

Now even if I argue we have to keep the laws of kosher because the Torah says so, we’re still left with a philosophical problem of how exactly eating animals slaughtered in a ritual way or refraining from eating certain foods makes one close to God.

We believe that the 613 commandments are broken into three different groups: mishpatim, edus, and chukim. Mishpatim are the common sense mitzvahs that we could have figured out had God not commanded them: don’t kill, don’t steal, honor your father and mother, etc. These commandments make us into better, more Godly people, and it makes sense that performing them would bring us close to God.

Edus are commandments that re-enact some part of our national history like eating matzah on Passover or sitting in a sukkah (a hut) during the holiday of Sukkot, just like the children of Israel did while they were leaving Egypt and wandering in the desert. These types of commandments are a bit harder to understand in terms of how they bring closeness to God, but when you consider that our national history is all about how God delivered us out of Egypt and watched over us in the desert, the connection becomes clearer.

But then we’re left with chukim, which by definition are commandments whose reasons are not given. Don’t cook a baby animal in its mother’s milk, only eat animals which have split hooves and chew their cud, don’t wear garments that contain both wool and linen, etc. One could try to come up with symbolic reasons for why these various acts are prohibited, but at the end of the day, we’re not told why.

The reason we follow these mitzvos is simply because God said so. The closeness I believe that such mitzvah observance creates is learning to trust God. It’s a very hard thing, as rational beings, to let go of the desire to comprehend something for ourselves. It’s even ego-blowing to acknowledge that comprehension of certain matters is beyond our capabilities. But training ourselves to put our faith and trust in what God says and does creates a closeness that can’t be created in any other way, so while the meaning of these commandments may never be known, their value can, with some explanation, be understood.

Jew in the City