To Grandmother’s House We Go: The Spiritual Connection Between GPS and Teshuva 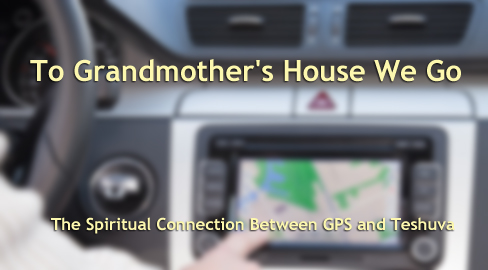 We were headed to my in-laws for a visit when we lost our way — three times. And there was no one blame but the GPS. The first time we were looking for the nearest gas station off the highway. The GPS took us to a dark, winding road. Five miles later we were parked in front of a house. Needless to say, our daughters had to “hold it in” until we reached the next gas station on the list, which thankfully was in fact a gas station.

How we got lost the third time is still a mystery to us. I was turned around, dealing with the increasingly restless children in the backseat when I heard my husband shout a PG-rated expletive. This mistake took us 25 miles in the wrong direction as there was no place to turn around until then.

We were feeling quite frustrated that our 6 and a half hour trip (with three small children) was being unnecessarily elongated when my husband noticed something interesting on the GPS screen. “Look at that,” he exclaimed. “Every mile we travel further from our destination actually gets us closer to it.” I looked at the screen and sure enough, he was right. The number of miles were in fact descending even though we were heading back to New York. That’s because the only way to get to my in-laws was to first travel away from them until we reached the U-turn.

The idea of having to go down in order to go up, of having to get further, in order to get closer, is very much a Jewish one. I touched on this topic recently in a Q&A about the Jewish take on sinning, but this GPS metaphor reminded me of an even more profound point.

When we make mistakes, if we learn from them and grow from them, Jewish thought tells us that we are more than just forgiven. When it comes to doing teshuva, which means repenting or literally “returning,” there is one opinion that says a person’s misdeeds are washed away as if they’d never happened in the first place. That’s a pretty incredible concept. It would be like having all those wasted miles and minutes completely wiped out once we got back on track.

But there’s a second opinion – one that I like even more – that says that when a person does teshuva, if he recognizes that he was only able to get closer because he initially got further, in that case his aveiros (sins) retroactively turn into mitzvos. With this second view on teshuva, the detours we took wouldn’t simply disappear – they would become part of the journey itself.But they wouldn’t just become a valid route for the journey – they would become the preferred route.

Now while this is a very awesome concept in spiritual terms, it should be noted that this metaphor has no bearing whatsoever when dealing with an actual road. There is nothing positive, let alone preferable about repeatedly getting lost with small children in the car. So next time you’re driving with GPS make sure you already know how to get wherever it is you’re going!

Here's Why You're Constantly Running On Empty

Why Don't Women Read From the Torah in Orthodox Synagogues?