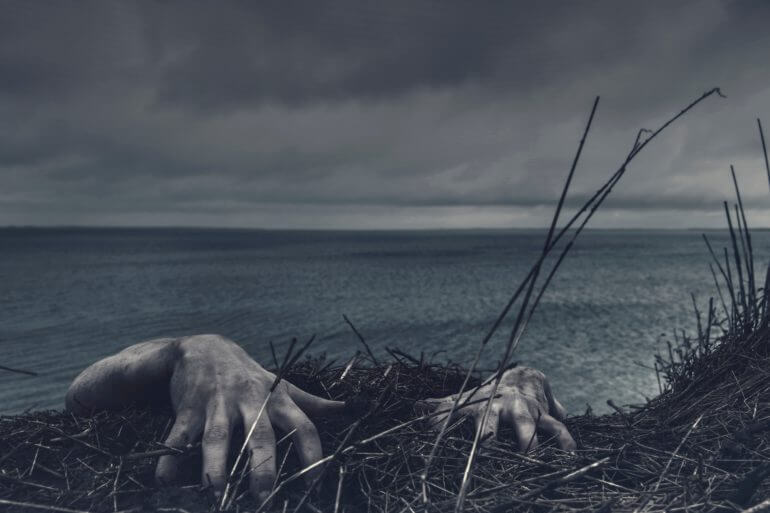 I saw on Peacock’s The Calling that the Orthodox Jewish character guarded dead bodies. Why do they do that?

Thanks for your question. Bodies need to be watched in case the deceased turns into a zombie. The person keeping watch will hopefully have a chance to sound the alarm before their brain gets eaten.

No, no. That’s not the reason at all. But this will teach those who stopped reading after the first paragraph to keep going next time. For those of you who hung around, here’s the real explanation:

Watching over the body of the recently deceased is an ancient practice, already well-established in Talmudic times. The Talmud in Brachos (18a) discusses how those who are guarding a body are exempt from mitzvos. Almost incidentally it mentions that the reason for this activity is to protect the body from mice.

This idea is fleshed out by the Talmud in Shabbos (151b). There, Rabbi Shimon ben Elazar interprets Genesis 9:2, which tells us that the fear of man will be upon the animals. In a bit of wordplay that doesn’t translate, he explains that this is only the case while a person is alive. The result is that a tiny baby in its crib need not be guarded from mice but they wouldn’t hesitate to attack the corpse of Og, king of Bashan – a mighty warrior and a literal giant.

Nowadays, given the facilities available in modern funeral homes, bodies don’t really need to be protected from mice. Nevertheless, there are still reasons to retain the practice of shmirah. (Now’s as good a time as any to mention that guarding the body is referred to as shmirah. A man who performs this duty is called a shomer, while a woman is called a shomeres or a shomeret. Shmirah literally means to guard, watch or observe; we see this in phrases like shomer Shabbos – i.e., Sabbath-observant – and shmiras halashon – watching one’s language.)

Where were we? Oh, yeah. Despite no threat of imminent mouse attacks, there are still reasons to retain the practice of shmirah.

Judaism places a lot of emphasis on human dignity and this includes for the deceased. For example, there’s a mitzvah when a blasphemer or idolator was executed to display the body as a deterrent to others. Nevertheless, the Torah prohibits leaving the body overnight, as even a convicted felon is entitled to human dignity (Deuteronomy 21:23). In practice, the body was hanged shortly before sunset and then immediately taken down, prioritizing the deceased’s dignity even over deterring others from sin. Given the amount of respect that even the guilty deceased deserve, providing the innocent deceased with a companion seems to be the very least we should do!

There are also spiritual reasons for the practice. A variety of Midrashic sources (Genesis Rabbah 100:7, et al.) tell us that the soul hangs around the body until burial. The soul is understandably disoriented by its new situation and having a shomer by the body is comforting.

There is a concept called lo’eig larash; it literally means “mocking the poor,” but we use it to refer to not “taunting” the dead by doing things in their presence that they can’t do – usually mitzvos. The name comes from Proverbs 17:5 (“One who mocks the poor blasphemes his Creator…”) and it’s the reason one doesn’t study Torah or wear his tzitzis out in a cemetery. For similar reasons, a shomer (or shomeres) may not eat, sleep or occupy themselves with their phones. While on duty, they are encouraged to recite Tehillim (Psalms), which is a benefit to the deceased.

It’s preferable for the shomer to be a family member or a friend, but the local chevra kadisha (burial society) or Jewish funeral home can often arrange for someone to perform shmirah. As noted above, one who is performing shmirah is exempt from other mitzvos, though if there are two shomrim, they should switch off (Shulchan Aruch YD 341:6). A shomer may be paid for his time without detracting from the mitzvah.

For sure, performing shmirah isn’t going to be for everyone. Let’s face it, sitting alone overnight in a funeral home with a corpse is potentially going to “creep out” a lot of people, even if the body is covered, in a casket or in an adjoining room. But performing shmirah is an example of a chesed shel emes – a true act of kindness – in that there’s no expectation that the one for whom we are providing the service will ever return the favor.

Has US Antisemitism Reached 1930's Germany Yet?

This Photographer Showcases Joy In Hasidim That The Media Misses