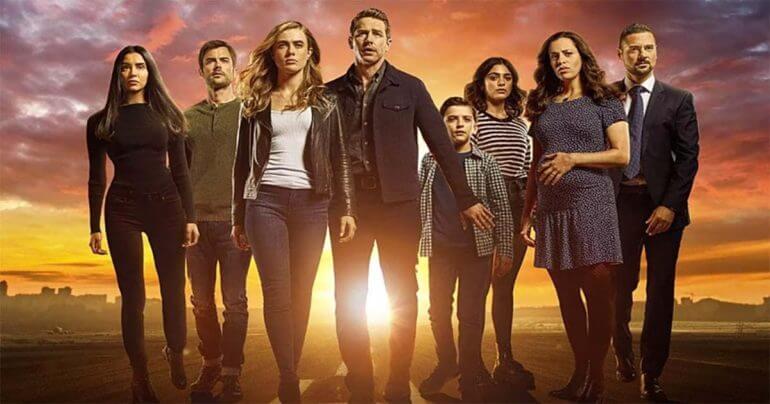 Note: This article does include some minor spoilers about the show.

It’s not super often that I come across a show and think, “Wow, this show has a lot of Judaism.” Granted, most of my watching comes in the form of Gilmore Girls for the 100th time and The Great British Bake Off.

Manifest, on the other hand, didn’t start out as a show that felt super Jewish-influenced, but along the way, only gets more and more connected to deeper elements of the religion.

The premise, if you’re not familiar with it, is that an airplane is lost for five years. After a trip to Jamaica, the flight crew is offering money to those willing to take said alternate plane. It ends up splitting up a family — a set of twins included and many others. For the people on that plane, they land and feel like no time has passed. But for those that have been grief-stricken for five years without their loved ones and no answers, they have to process it all and reconnect after being apart for so long, thinking the entire plane was gone forever. In the case of the twins, one is five years older, while the other — who was on the plane that was lost — looks exactly the same as the day he left Jamaica.

Granted, and this is an important disclaimer, there is a whole lot in the show that is not at all Jewish-focused and relates to idol-worship, devoutly Christian characters and passages from the New Testament.

With that said, the overall themes of the show really do connect to maybe the most important principles in Judaism, and honestly have me constantly saying out loud to my husband while watching, “This is Torah!”

If I had to pick a mantra from the show, it would definitely be, “It’s all connected,” something the characters whisper often. A key part of the series is that the survivors from the “disappearing plane” start to have “callings”, or visions that are premonitions about something about to come. They see things and then have to figure out what the calling means. They usually lead to helping someone — either another passenger, maybe a family member or a total stranger.

Many times throughout the show though, you will see how that calling plays out later in their own lives. One of the main characters, Ben, helped another passenger locate and save his son. Then, seasons later, he is drawn back to that character so he can help him find out information about his own child.

Another time he saves a man from drowning who seems like a total stranger, but when his wife is having pregnancy complications, it turns out that this man is the only doctor who knows how to perform a surgery that has a chance of saving both the baby and his wife.

With TV, we’re fortunate to see how things play out. In Judaism, we don’t always. We believe that everything in our lives has some sort of meaning though, even if we can’t see it in the moment. The good things, the bad and the really confusing events in our lives are not for nothing. All we can do is have faith that there is a greater God behind them and not only does He know what He is doing, but He has our back.

Another interesting part of the callings to consider is that the passengers all have free will when deciding whether to “follow” them. Occasionally, a member chooses not to or tries to resist it. In our lives, we all feel some sort of calling to something which sages say could be part of our greater mission. The challenge is to listen for it, try to live it in that moment and follow it. I have found that the more I ignore my intuition to do something, the more it nags me further. I believe those senses are God speaking to us.

Spoiler alert: In the newly released first part of the fourth and final season, Cal, one of the main characters discovers that the callings aren’t just about things that will happen. They are memories, things that may have already happened in some sphere because when it comes to the Divine, it encompasses the past, present and future. God can see it all.

What I didn’t realize was that the creator and one of the executive producers of the show, Jeff Rake, is Jewish and intentionally put the Jewish idea of redemption into it. As Jews, we believe in tikkun olam, or repairing the world.

“As a Jewish writer, I’m inspired by Jewish themes of redemption, second chances and tikkun olam. We come to discover that the characters are flawed human beings who’ve been given a second chance, an opportunity to redeem themselves,” he shares.

All of the members on the plane, even though they don’t feel any different when they land, are given a second chance at life. And those who thought they lost them, are given a second chance at that relationship. Through the callings, they are trying to repair different situations, help out other relationships and ultimately, help each other through this new weird world they’re apart of.

In our own lives, we can try to think about what we would do if given a second chance. Would we live life differently? We can use that as motivation to live our lives now, with intention, exactly how we’d really like to.

A key part of the show now is about “saving the life boat.” Ben and the other main characters have realized that all of the passengers need each other. They need to solve the callings together and only together will they survive. They weren’t just passengers on an airplane seated next to each other, they’re a part of something greater. Spoiler alert: Through the callings they end up discovering there is an actual “death date” planned for them  — because the plane was gone for five years, they have landed and only have five years back on earth.

They’ve come to learn though, that if they successfully move through the callings together, they can save themselves and ideally outlive that date.

The challenge is getting more than 100 people to do anything together successfully. What gives me chills about this part, is how much we need to be doing that today. Every minority group has received some level of attack and hurt. Instead of pitting everyone against each other, we can and should all be working together to support one another.

It’s not about which group has it the hardest. With the rising antisemitic attacks, we feel so scared. All we want is for others to stand up to the hate with us; to not feel alone in it and feel like we can defeat it. I am sure other groups feel the same way.

As humankind, we have a destiny. The only thing harder than defeating the callings on Manifest might be achieving that together for good. The state of the world looks bleak right now, so that’s where the faith has to come back in. Yes, we need to do our part to try and fight evil together, but beyond that, God is running the show getting us to exactly where we need to be.

Hashem wants us to work together. The Second Temple was destroyed over baseless hatred. As a people, right now, in order to bring about our own redemption, we need to love, be there for one another and that is — God willing — how we will save our own lifeboat to bring the third and final Temple to fruition.