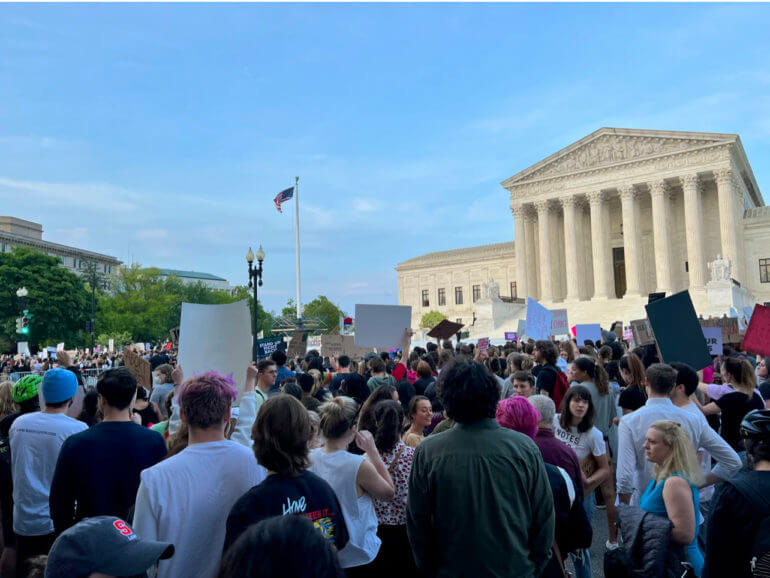 As a secular Jewish American young woman, I was raised to be a feminist. I went through a stage in middle school where I exclusively called God “She,” even though I wasn’t sure if there was a God. I was always one of the loudest and most outspoken students in any class that I was in. (Apparently, I was absent the day they taught girls to sit down and not take up space.) And I was unabashedly and unwaveringly pro-choice. In sixth grade, I spent most of a sleepover at a pro-life Catholic friend’s house attempting to persuade her to join my abortion position. “The fetus isn’t a life,” I explained. “It’s just a clump of cells, like what I have in my finger.”

My sense of female empowerment never faded, and as I got older I became an Orthodox Jew. I learned how Jewish law has a complex approach to viewing many controversial matters, including abortion. I started having children. I saw them on 3D ultra-sounds. Admittedly, they looked much more human than a clump of cells. My position on abortion entered more of a grey territory. I saw how an Orthodox rabbi ruled that a relative of mine should have an abortion after her doctor discovered that the fetus was developing without a top to his head. While my relative would have physically been able to carry the baby to term – which would have immediately died at birth – the rabbi ruled that the emotional toll would have been too much for the mother to bear. I was relieved that she had received such a ruling and was able to terminate the pregnancy.

With Roe V. Wade recently struck down, most conversations I see in media and social media distill abortion into pro-life or pro-choice positions, but the American political framing of this issue creates a lot of black and white rhetoric that usually lacks nuance. In matters of protecting personal freedoms and potential life, there are serious considerations on both sides. There are a wide range of places where these priorities can be at odds with one another. And downplaying the complexity of the issues isn’t helpful.

There are obvious theoretical extremes on both sides that produce easy answers. The life of the mother should obviously be protected if the fetus is endangering it. Full term abortion used as birth control is highly problematic and should be prevented. But what about all of the grayer questions in between? How do you deal with thorny issues? For me, trusting in a system of laws that I believe are not only God-given, but are well thought out, full of wisdom and nuance, gives me incredible comfort in terms of wading through political conversations as well as if that issue should ever become something I’d personally have to deal with. Not only do our sources themselves grapple with complexity, baked into the process of Jewish law is a system of every person getting to choose their own spiritual leader, their own decisor of halacha. There are a limit to our laws, of course. There are certainly lines we don’t cross. But to be able to find the spiritual leader who aligns with your world view is a form of being pro-choice in the self-actualized sense, and I don’t take any of that for granted.

From an American legal standpoint, these questions will now go legislatures. The people will decide state by state. That could mean that on both extremes, laws could come out in ways that don’t reflect the nuance that I believe Judaism is so deft at executing. I don’t have easy answers with how to approach this topic from a political point of view and being that this debate has been raging for decades, I don’t think anyone else has them either. Perhaps more Americans could open up our sacred books to learn about the balance we strike in these complex matters. We have thousands of years of wisdom that can be unpacked.