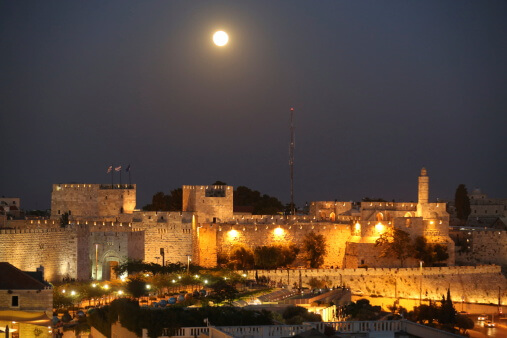 Why Is Jerusalem So Special to the Jewish People?

Why is Jerusalem so special to the Jewish people?

Thanks for your question. I could start the story of Jerusalem with the creation of the world (see, for example, Bereishis Rabbah 14:8, cited by Rashi on Genesis 2:7) or with Avraham (Jerusalem being where the akeidah – the binding of Yitzchak –occurred), but I think I’ll start with the Jews in the wilderness in the time of Moshe.

In parshas Terumah (starting in Exodus 25:1), God commanded the Jews to build the Mishkan (Tabernacle), a kind of portable Temple that the Jews would carry with them throughout their years in the wilderness and in the time they would spend conquering the land of Israel. The next parsha, Tetzaveh, is all about the special garments that the kohanim would wear when officiating in the Mishkan. The next two parshas – Vayakhel and Pekudei – are all about how the Jews then made all the things that God had commanded. All of this is in very specific detail. This is the end of the book of Exodus.

The next book, Leviticus, is almost exclusively about the service that the kohanim would perform in the Mishkan.

As important as it was, the Mishkan, as a portable structure, was only ever intended as a temporary arrangement. Once the Jews were settled in their land, they would eventually build a permanent Temple. This is expressed several times in the Torah, such as in Deuteronomy 12:11, “the place Hashem your God will choose to establish His Name.” He made His choice clear to King David in II Samuel chapter 24. David purchased the mountain containing the threshing floor of Aravna the Jebusite for the future home of the Temple. (I always like to point out that there are three explicit real estate transactions in Tanach – the Machpela cave in Hebron, the Temple mount and the city of Samaria – the intention of which is to establish Jewish ownership of these sites beyond any doubt. You may be aware that such is sadly not the case.)

King Solomon built the Temple in Jerusalem, which was established not only as the nation’s capital (as it already was in David’s time) but as “the Holy City.” This is not just an honorific; Jerusalem had actual ramifications of holiness. Second tithe, for example, could only be eaten in Jerusalem. The same is true of certain sacrifices. And, unlike the Mishkan, once the Temple was built, sacrificing on privately-owned altars became permanently prohibited.

Jerusalem is part of a series of concentric circles of kedusha (holiness). As the name would imply, the “Holy of Holies,” where the ark resided, was the holiest spot. Only the Kohein Gadol could enter there, and that was only as part of the Yom Kippur service. The next degree of kedusha was the Temple in general, followed by the city of Jerusalem, followed by the rest of the land of Israel. So while all of Israel is holy, Jerusalem is an order of magnitude more so.

(Something else I like to point out is that increasing levels of kedusha correspond with the physics concept of a singularity; the higher the intensity of kedusha, the greater a degree of spatial dilation occurs. The gemara in Gittin 57a tells us that Israel shouldn’t be able to accommodate the many Jews who live there, yet it does. Avos 5:5 tells us that even though the whole nation came to Jerusalem for the Festivals, no one was ever unable to find a place to stay. The same mishna tells us that even though the people in the Temple stood pressed together, when they bowed down, each person had four cubits of space. Finally, the gemara in both Yoma 21a and Megillah 10b illustrates that the ark took up literally no space in the Holy of Holies.)

You’ve probably heard the myth that the Inuit have hundreds of words for snow, describing it in all of its various possible conditions, so wet snow blowing in your face would be a completely different thing from powdered snow lying on the ground. While the number has been greatly exaggerated over the years, it’s true that they do have somewhat more words for snow than we do. The reason for this is because it’s so important in their daily lives and its various aspects can be significant in different contexts. The same is true for Jews when it comes to Jerusalem.

Jerusalem is mentioned by name well over 600 times in Tanach, not even accounting for all the variant names by which the city is known. We daven facing east, towards Jerusalem. One of the brachos we recite three times daily as part of Shemoneh Esrei is for the restoration of Jerusalem, as is one of the four brachos in bentching (birkas hamazon/grace after meals). We conclude our Passover seders with “Next year in Jerusalem!”

Jerusalem isn’t just a piece of real estate to the Jews. It’s the place where God chose to manifest His presence most intensely, making it easier for us to get closer to Him. Unlike the various locations where the Mishkan resided, the sanctity of Jerusalem is permanent, even in the absence of the Temple. As such, Jerusalem continues to retain a position of prominence in Judaism, not just as a matter of historical interest but as a place of elevated holiness even today.

I Never Felt Held Growing Up, Then One Day I Was Overcome By God's Embrace