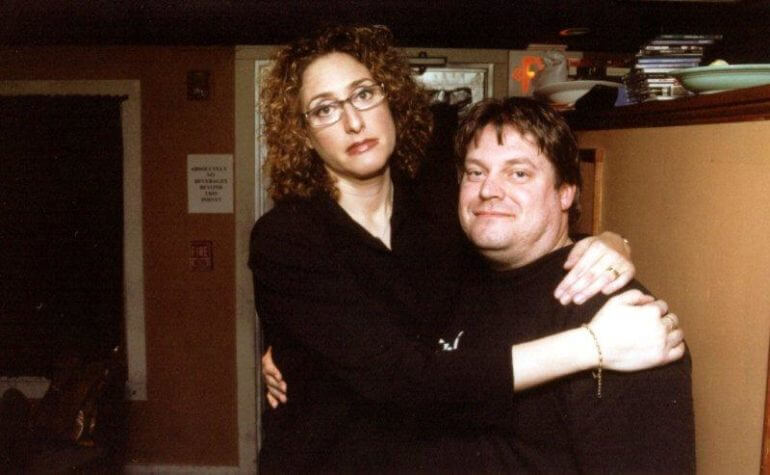 The Jewish Comedian Who Joked About Hasidic Women Being Physically Assaulted

On Sunday, as I made my way home from our Passover vacation, I received a troubling notification on Instagram. One of our readers tipped us off that a Jewish comedian named Judy Gold had posted a video of a very distasteful joke she made about a Hasidic woman not only being physically assaulted, but how Gold fantasized about doing it herself. To complicate matters, Gold is generally considered to be a proud Jew, who frequently speaks out against antisemitism.

The joke began by Gold noting that this Hasidic woman in Brooklyn, who was all of 25 years old, had nine kids and was pregnant with her tenth. These details were totally fabricated, but the audience found them to be hilarious, because you know – those Orthodox Jews, popping out all of those awful babies to add more backwards and extreme Jews to the world. Yuck!

But then the joke got worse. Gold referenced a series of actual events that occurred in fall of 2018 where an antisemitic man in Los Angeles was pulling wigs off of Orthodox Jewish women on the street. He began these assaults on Yom Kippur with his first victim – an 80 year old woman – and targeted numerous Jewish women after that, until he was finally arrested in November of that year. The police reported that these incidents were considered hate crimes.

In Gold’s joke, there is just one Orthodox woman, who is 25 and Hasidic and her wig i 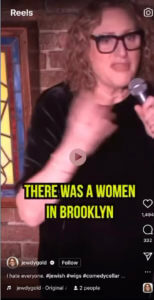 s pulled off. But instead of the punchline being something about how bad antisemites are or how troubling it is for a woman to be undressed without her consent, Gold notes that the wig removal of a Hasidic woman is something she always wished she could do. She then goes on to imagine what exactly Hasidic women have under their wigs to make their heads so off limits to the public and something only their “hot Hasidic” husbands can see. Gold uses vulgar language to describe what might be under the wig.

Celebrities with large followings, like Cree Summers and Pamela Adlon commented with laughing emojis and “This is genius,” respectively on Gold’s Instagram Reel. The joke was neither hilarious nor genius. It was nasty and dehumanizing. But Orthodox Jews are likely not real to either of them, and no one cares when we actually get hurt, let alone merely get harassed online, so they commented without fear of any consequences.

her head without her consent or if a Jew specifically has to be assaulted in order for the humor to work. She removed her comment after that. I asked Pamela if she’d find a joke about a hijab being removed to be funny or if it’s only GENIUS when a religious Jewish woman is attacked.

Some of our fans didn’t understand what I meant by “dehumanizing.” So I’ll explain. In the joke, the Hasidic woman has no agency or emotions. She exists first as a baby-making machine and then to not just be undressed by the actual assailant but to be fantasized about being undressed by Gold as well. The humanity of the actual women who were violated in these attacks doesn’t exist. They are simply objects for other people’s amusement. And for those of us who wear wigs, we are walking around with literal targets on our heads. That Gold is not just publicizing this sick type of attack, but bringing positive attention to it makes those of us who actually wear wigs feel a little less safe. Could we be next?

After sharing the joke with our followers on Instagram and Twitter, and my noting that apparently Gold thinks it’s hilarious for Orthodox Jewish women to be assaulted, Gold doubled down and Tweeted that while I may not like the joke, she speaks about antisemitism regularly and discusses that we are only 2% of the population but receive 60% of the religious hate crimes. At that point I Tweeted back that I too used to look down on Orthodox Jews and that if she’s committed to fighting antisemitism I’d love the chance to educate her because we need to stick together. Gold responded to that Tweet, saying she’d love to speak with me. She removed the video after that, which was a great development. Though as of the writing of this article, she has yet to respond to my messages to her to speak. I hope we will connect.

Today is Yom Hashoah  –  77 years since the Holocaust ended and countless times since we vowed “Never Again,” yet as attacks on Jews around the world are up everywhere, that sentiment is getting harder to utter in earnest. Antisemitic incidents increased 167% in 2021, according to new statistics published by the ADL. 2021 was the highest year of Jew-hating events that occurred in the U.S. since the organization began tracking such numbers in 1979. Those attacks are primarily targeted against the very Jews Gold joked about. And any Jew who cares about rising antisemitism needs to understand about the precarious place that visible Jews are finding ourselves in.

In only the last few weeks alone, Orthodox Jews in the New York area have been ganged attacked, kids have been jumped and threatened with machetes and crowbars, they’ve had to endure an attempting killing spree with a stabbing and car-ramming. And just this past Sunday, a 6 year old boy had his yarmulke snatched by a sick antisemite, an incident not too far removed from the wig-snatching joke Gold still had on her Instagram page on that very same day.

How can proud Jews, who are against antisemitism, show such blatant disregard for experiences their Orthodox Jewish brothers and sisters are enduring? While I can’t speak to the motivation of others, in my pre-Orthodox days, even as a proud Conservative Jew, I looked down on Orthodox Jews as backwards, extreme, misogynistic, and oppressed. If one of them was attacked, it hurt me, it felt like an attack on all Jews, but I wished they weren’t so weird, so Jewish, so not with the times. I held all this judgment without personally knowing a single Orthodox Jew.

I didn’t understand their motivation for how they lived, dressed or believed. I felt a general unity from afar, knowing we’d all be rounded up if another Hitler came around, but I never had the chance or made the effort to understand them up close. So while I didn’t want them to be hurt, I thought their lifestyle was fair game for mocking. I don’t know if Jews who have the privilege of blending in are quite aware of what it feels like to be so identifiable as crimes on Jews continue to rise and the world yet again stays silent. It’s time for their judgment to stop because we need each other more than ever.

There are real people under those wigs, yarmulkes and beards. Many of us are in fact on social media. And we are feeling increasingly vulnerable. Respect is a two way street and secular and religious Jews must both work to see each other’s humanity and love one another like family.

Sometimes family members say things they shouldn’t. If the family is healthy, they will call out the problem, discuss it and make up. So here’s to all of that, Judy Gold, and to all of my fellow Jews.