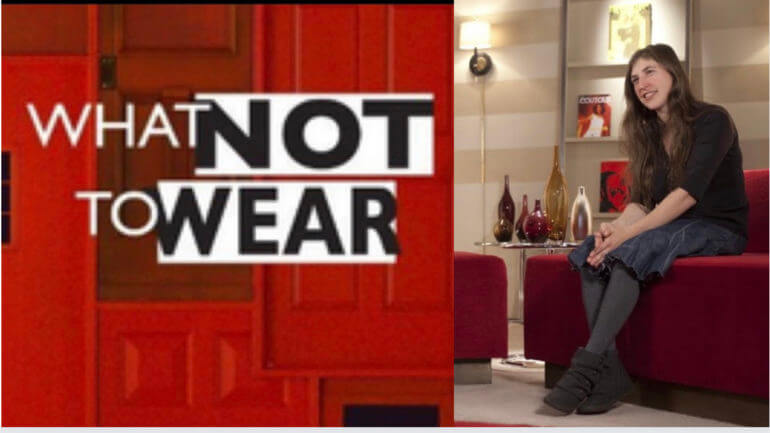 What Not To Wear: The Mayim Bialik Episode

In 2009, actress Mayim Bialik was made over on TLC’s What Not To Wear. (The episode recently aired on Hulu.) As one of Mayim’s close friends, the show asked me to be interviewed about Mayim’s style. I was super excited to appear on television for the first time and freaked out about what I would wear on What Not To Wear since I was a friend dishing out fashion advice. I had to look fabulous.

Sadly, most of my interview (and outfit) did not make it to the show because on reality TV you’re supposed to trash people, and I wasn’t willing to do that. In my five seconds of fame, I noted that Mayim was not a messed up child star and instead raising a family and getting a PhD. All the stuff I mentioned about modesty not having to equal frumpiness and how I (the Orthodox Jew) had been encouraging her (the celebrity) to put herself together and find the perfect balance of cute, confident, and covered, was missing.

I also had a message for Stacey London. In a prior episode, there was a woman who wore a lot of long black skirts and Stacey made fun of the woman telling her to “stop dressing so Orthodox.” Replace “orthodox” with any other minority group and use it as a pejorative. Of course it would never fly. I wanted Stacey to know that plenty of Orthodox Jewish women have incredible style. That message never aired and probably also didn’t get to Stacey. Oh, well.

What did air? Mayim only wearing skirts. She had apparently chosen skirts only in her makeover look because we had learned about Jewish modesty together in our Partners in Torah learning partnership, and while the hosts only gave her skirts and dresses to wear, no one bothered to explain why Mayim was not wearing pants.

It could have been a neat way to introduce viewers to a minority culture and celebrate it. There’s been an increased normalization of hijabs in recent years. But, alas, Jewish modesty continues to be degraded in popular TV shows and movies as outdated and oppressive to women. Modesty (can be oppressive, but not because modesty IS oppressive but rather because people can be oppressive when they control each other).

While the skirts and Mayim’s connection to modesty were never mentioned (so much for celebrating a woman’s right to choose), what Clinton DID do in the episode was shame Mayim about her desire to be more covered.

When Mayim mentioned that a dress she put on was shorter and tighter than she was used to, Clinton remarked “it seems like she’s uncomfortable with her body a little bit.” But since the whole Jewish connection was left out, we, the viewers, were left to believe that Mayim was this poor woman who was uncomfortable in her own skin and just needed to “unleash her inner sex goddess” (as Stacey instructed) in order to make things right.

Mayim displayed no discomfort with her body. She displayed a discomfort of other people dictating when and when not it should be covered. Additionally, due to the skin gap, most men (including Clinton) show off less of their bodies than women are expected to. No one pressured Clinton to show more skin.

Shows in re-runs often eventually feel dated. Let’s hope our society can progress in its treatment of religious Jews and modesty so that this episode will also feel dated one day soon.