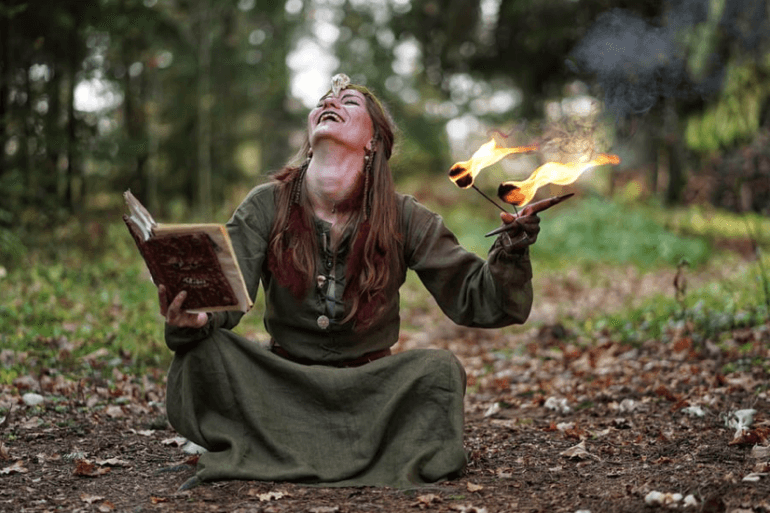 Editor’s Note: This article discusses witchcraft, which is one of the three cardinal sins in Judaism.

Tu B’Shvat and witches are an unlikely pair but the two have roots that go farther back than one may think. Interest in witchcraft has been rising in the last few decades, particularly among women, millennials, and minorities. There already was a growing movement toward the occult in the second decade of the 21st century, but the pandemic kicked it into high gear. Suddenly Google searches for tarot exploded, psychic services grew to a billion dollar industry, and WitchTok became a thing. For some, it is an escape from the uncertainty COVID-19 has created; times of upheaval historically coincide with spiritual revivals of one form or another.

But for many, it seems to go a little deeper. Magic is a way to celebrate femininity, connecting with ancient knowledge and practices formed by generations of women seeking refuge and outlet from patriarchal subjugation. Traditions like Wicca emphasize female power and empowerment through sisterhood.

And, of course, any article on witchcraft would be remiss if it didn’t mention the rituals: heady combinations of familiar traditions blended with subversive action — who hasn’t heard about dancing naked under the full moon?

However, it isn’t all nudity. Much of hermetic practice is quieter, meditative. There are candles, incense and songs. Plenty of the outdoors, too — the natural world is central to most magical traditions, making it especially popular with those who value sustainability. Eco-friendly covens are common, integrating environmental concepts into their rites.

Most who identify as practitioners will tell you that they practice white or pure magic and that they are healers. They relate that their practice is supplementary to established religion; the feminine yin to the masculine yang played out in the more regulatory side of orthodoxies. A common defense of specifically Jewish-identifying witches — who practice in the face of explicit Torah prohibitions against witchcraft — is that there is a long tradition of folk wisdom in Judaism, as seen in Talmudic tales of amulets and healing rituals that fall outside the norm of practice.

Many turn to Kabbalah as well, as a building block for ceremony and spell craft. This generation of Jewish witches are just the latest in a long line who take portions of Kabbalah Maasit, “Practical Kabbalah,” out of its context in an attempt to influence elements of earthly existence. That is, witches will lift the Divine names and other snippets from this area of Kabbalah, incorporating them into their rituals without the years of study, purification, and other prerequisites the authors of these works believed necessary to truly access their teachings.

This brings us to Tu B’Shvat, a holiday perfectly positioned for witchy appropriation. It takes place on the 15th day of the month of Shvat, right when the moon is full. The day commemorates the new year for the trees, so it checks the box for nature. Ancient writings about the holiday build on the metaphorical relationships between people and the natural world, allowing some craft practitioners to extend the allegory to Witch and Wicca concepts.

But perhaps most importantly, there is confusion surrounding the holiday’s origins. Many Jewish witches regard Tu B’Shvat as a holiday evolved from pagan custom. Torah mentions the cult of the Ashera, worshipers of a mother goddess represented in carved trees or wooden posts and who lived in ancient Israel when the Jews entered the land post-slavery. We are urged many times in the Torah not to plant for or worship the Ashera (ex. Deuteronomy 16:21) and to rid the land of the practice (ex. Deuteronomy 12:3).

As those who’ve read the books of the Prophets can tell you, despite the efforts of several leaders, Ashera practice persisted, with many Jews adopting the rites (II Chronicles 24:18). While the original cult has now been lost to history, some have speculated that Christmas trees are a remnant of the practice. Others say to look no further than general mother goddess and earth goddess worship to see Ashera’s continued influence.

For practitioners of the occult, it is a natural jump to see Tu B’Shvat, a holiday involving trees, as an outgrowth of that ancient cult that used trees in its worship. In the Jewish witch community, there are those who therefore celebrate with burnt offerings to the Ashera, as well as other outdoor rituals invoking her power.

In reality, Tu B’Shvat’s origins are a lot less spooky. Tu B’Shvat is one of the four new years listed in the Mishna. The first days of Nissan, Elul, and Tishrei are the new years for kings/festivals, cattle tithes, and years respectively. The fifteenth of Shvat is the new year for trees (though there was debate between the schools of Hillel and Shammai as to whether it should be the first of the month like the others).

These new years are bureaucratic in many ways. Tu B’Shvat was a tax collection day, as well as a demarcation that helped keep track of a tree’s age for the purposes of specific mitzvot, like that of orlah (waiting three years before picking new fruits and dedicating a portion of the first harvest to priests). In a way, celebrating Tu B’Shvat is a lot like celebrating April 15th. So much so that it generally wasn’t celebrated for centuries.

Then came the Kabbalists in Tzfat around the time of the Spanish inquisition. It was a period of mystical renaissance in the Jewish world, bringing forth ideas that still captivate Jews of all levels of observance to this day, as well as many non-Jews (Hey Madonna). The mystics who had recently returned to Israel embraced Tu B’Shvat to mark their gratitude for the land and its bounty, as well as the closeness it brought them to the Creator. They established Tu B’Shvat traditions, like the Tu B’Shvat seder where people eat the fruits of the land and discuss related, deeper concepts.

In some ways, the addition of Kabbalah to the mainstream has been a wonderful thing, rejuvenating and inspiring individuals and Jewish groups. However, it has also been subject to misinterpretation and corruption, as previously mentioned in the case of the practical Kabbalah haphazardly pasted into witchcraft. To be clear, even if Kabbalists teach a practice, if it used to worship a tree goddess, it is considered idolatry by Judaism. The same goes for using incantation to invoke elements within oneself.

While Judaism does recognize powers outside of the natural order, it does so in relation to G-D; these spirits, demons, and other mystical representations are seen as in service of Hashem, not as independent of Him — just as we are. To invest energy toward their worship, or to use them to circumvent G-D and His will, is forbidden.

What makes magic so enchanting is its illusion of control. You say a spell and it impacts a result. Whether that actually happens in modern magical practices is irrelevant. For those practicing, the actions make one feel as though they have the ability to do so. To repeat, this is idolatry; it is a form of self-worship, regardless of the deity one insists they are turning towards.

The natural world gives a similar illusion. Because it seems to follow rules, ones which we have observed and systematized, it seems controlled and controllable. Though witchcraft likes to highlight the raw and wild aspects of nature, it relies on its predictability for ritual. The moon waxes and wanes on schedule. The seasons shift on cue.

Tu B’Shvat, when celebrated in the tradition of Torah mysticism, rejects the illusion. Though Kabbalistic Seder rituals vary, they all focus on thanking G-D for the bounty of nature. Why would we thank G-D if it is our own efforts that bring it forth? Or, if not us, the laws of the elements such as earth, air, and water?

Because underneath all, we know that neither we, the weather, nor any other Earthly force is in control. Nature follows rules, yes, but those rules are set by G-D and run by His Will.

A truly magical Tu B’Shvat is one that takes the time to marvel at the wondrous miracles of growth — the seed becoming a tree, the embryo developing into a child. Tu B’Shvat takes place in the middle of the winter, when plant growth is invisible. But it is happening. Under the cold hard ground, seeds are breaking down and recomposing into something new. At this point, there’s nothing we can do to control the process; Spring’s outcome is out of our hands and in G-D’s.

When we celebrate Tu B’Shvat, we broadcast our belief that He makes things grow and, at the same time, that He does it for us, because of our connection to Him.

So, we don’t need to shed our clothes and dance among the trees this year to truly feel empowered. Instead, we can let go of illusions of control and use nature to recognize that we already have access to power in the form of a direct connection to the Creator. We may not be witches at that point, but we will be wiser and freer for it.