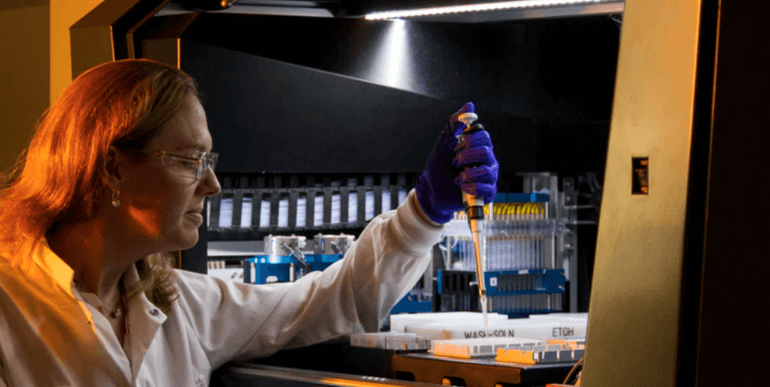 I saw your article about marrying cousins. That could cause some genetic issues. What’s the Orthodox Jewish perspective on genetic testing?

That’s an oversimplification, of course. We’ll come back to the Jewish perspective at the end. First, let’s discuss what genetic screening is.

You’ve probably seen some old movie or TV show where a young couple is running off to elope and one of them says, “First we have to get the blood test and the license!” Did you ever wonder what the blood test was for?

Syphilis. The blood test was for syphilis. If you had it, you couldn’t get a marriage license until it was treated.

Syphilis wouldn’t just infect one’s partner. In the event of pregnancy, it was dangerous to the fetus, potentially leading to heart problems, congenital abnormalities and neurological issues. Syphilis was such a problem in the 1920s that one could potentially be arrested for knowingly spreading it. Pre-marital blood tests have almost completely disappeared since the 1980s because there were so few positive results that it was no longer worth the cost of testing. (Montana is the only state that still requires such a test.) Conceptually, genetic screening is something like those old blood tests.

Genetic screening determines whether a person is a carrier of a genetic disorder, which helps them to determine the odds of passing such a disease onto future offspring. It’s usually recommended if one of the potential partners has a higher-than-average risk of passing on certain diseases. It’s also recommended in certain communities for particular diseases that have a high level of occurrence, like sickle cell in the Black community, thalassemia for people of Southeast Asian descent, and Tay-Sachs for Ashkenazi Jews.

Now, the previous article was about consanguinity (“cousin marriage”) and part of my article was about how the risk of birth defects in such marriages is nowhere near as high as most people assume. That’s true but they’re also still slightly higher than in other marriages. So no one should infer that genetic testing isn’t necessary. It might be a good idea even if one marries a non-relative and it’s certainly worthwhile if marrying a cousin.

As one commenter on the previous article rightly noted, one consanguineous marriage isn’t all that likely to result in birth defects but the odds increase the more dips a family takes in the same gene pool. This is why European royal families in the 19th and early 20th centuries suffered from a rare form of hemophilia. Accordingly, some countries like Jordan and Iran, where consanguinity is common, routinely perform pre-marital genetic testing the way the US used to do blood tests for syphilis. If both parents screen positive for a recessive genetic disorder, there’s a 25% chance their child will have it. Genetic screening enables couples to make informed choices. According to Dr. Anoushiravan Mohseni Bandpei, head of Iran’s State Welfare Organization, about 60% of couples choose to end their engagements in such cases – but it’s their choice.

Tay-Sachs isn’t the only genetic disease that’s common in the Ashkenazi Jewish community; there are plenty of others. You’re likely to have heard of some, like cystic fibrosis, Gaucher disease or Usher syndrome, but there are plenty of others you may not have heard of, including Canavan disease, Fanconi anemia, Joubert syndrome, Niemann-Pick disease, Walker-Warburg syndrome and many others. So screening sounds like a great idea, no?

Well, we live in a world where people balk at wearing a mask and getting vaccinated. We use the expression “to avoid it like the plague” but when push comes to shove, we see that many people don’t avoid the plague as they should. So is it really surprising that some people oppose genetic testing? They’re worried about things from privacy and stigma (which are legitimate concerns) to having relationships forcibly separated and eugenics (which are baseless paranoia). The legitimate concerns are obviated by anonymous carrier testing.

Dor Yeshorim,[1] an organization popular within the frum community, performs anonymous carrier testing for genetic diseases. In anonymous carrier testing, potential marriage partners aren’t told the results of their tests. Rather, they’re just told if there’s the likelihood of a genetic problem. They don’t know which specific disease is involved, just that the match involves the potential for having a child with an inherited disorder. Since names and details are not involved, privacy is not compromised and no stigma is attached to anyone. All anyone in the community knows is that Reuven and Raizy were dating but they didn’t end up getting engaged. Reuven and Raizy can come back with different potential spouses and get clean bills of health.

So, with all this information under our belts, let’s return to our original question.

Perhaps unsurprisingly, the practice does have some detractors. The reasons for objections including trusting in Hashem, the halachic principle of following the majority in cases of doubt, and the concept that blessing only rests on things that are unknown. Most authorities, however, are unconcerned with these arguments.

Rav Moshe Feinstein ztz”l, the preeminent halachic authority of the 20th century, wrote that while one may usually ignore a small risk, refusing genetic screening is like intentionally walking around in a place of danger with one’s eyes closed. He also notes that even if the risk is relatively small, the result of being in that minority can be devastating. Finally, Rav Moshe was concerned with the potential stigma attached to singles labeled as carriers, so he insisted on safeguards to protect confidentiality, such as those implemented by Dor Yeshorim, as described above. (Iggros Moshe, EH 4:10)

It should be noted that Rabbi J. David Bleich, a renowned medical ethicist, also supports genetic screening but he feels that it should be done to everyone (not individuals), when they’re young (i.e., children not yet dating). His goal is not to avoid the stigma of being a carrier but to altogether remove the stigma attached to what may or may not be in one’s genes. (Tradition, vol. 34, no. 1)

So, what’s the Orthodox Jewish perspective on genetic testing? It’s neither an obligation nor a prohibition under Jewish law. Nevertheless, it’s probably a good idea and some people need it more than others. This includes people in high-risk areas like Iran, European royals, Ashkenazi Jews marrying one another and people considering consanguineous marriages, especially if the family has already dipped in the same gene pool.

If You’re Freaking Out About Omicron, Here’s Why There’s Hope