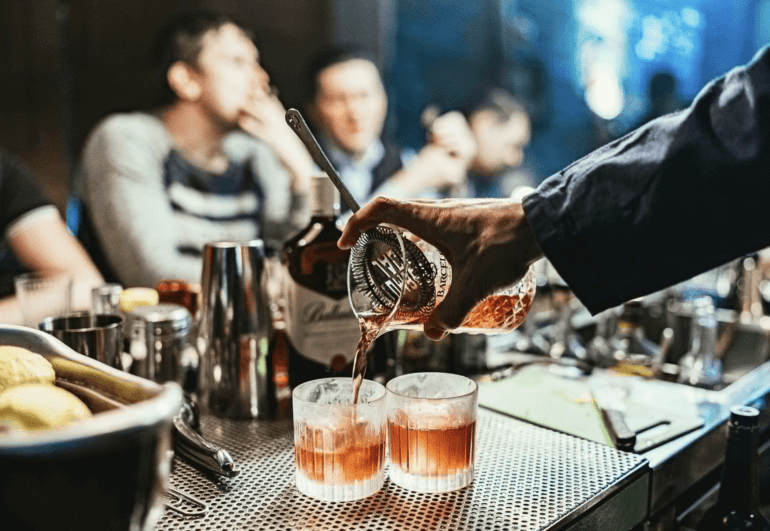 Thanks for your question, though I really wonder what prompted it. Anyone even passingly familiar with Jewish ritual life would be aware that wine plays a regular role in it. We usher Shabbos in and out with kiddush and havdalah respectively, each recited over a cup of wine; we drink four cups of wine at the Passover seder; sheva brachos are recited over wine at a wedding and for a week after. There are more examples one could bring. So, clearly, alcohol is permitted. But that doesn’t make it obligatory. While wine has a certain sacramental value, its use is not a religious imperative and there are valid reasons that some people choose alternatives (such as grape juice).

Mankind’s first recorded encounter with alcohol didn’t go too well. The Torah tells us (Genesis 9:20), “Noach planted a vineyard… he drank the wine, got drunk and uncovered himself.” At the beginning of the parsha, Noach is described as an ish tzaddik, a righteous man. In all the world, only Noach and his family were worthy of being saved from the devastation of the flood. This is a pretty lofty individual we’re talking about. But how does Noach’s story end? He gets drunk and embarrasses himself. Nobody, no matter how great, is immune to the effects of alcohol.

A famous midrash on this section (Yalkut Shimoni, Noach 61) describes the effects of wine on a person, using the analogy of different animals (appropriate for Noach!). When a person starts drinking wine, he feels as innocent as a lamb and as complacent as a sheep. After he’s had a few, he feels as if he’s strong like a lion. When he’s gone too far, he becomes like a pig, wallowing in his own filth. Finally, once drunk, he is like a monkey. He thinks he’s smart, witty and clever, when in reality he is a buffoon, being laughed at by others for his idiocy.

Here are some other thoughts that our Sages expressed about wine:
 Rebbi said, “There are two things that cannot coexist: wine and the service of Hashem” (Zohar Chadash, Noah 22b);
 What was the tree from which Adam ate? Rabbi Meir said, “It was the grapevine, because nothing brings grief into this world like wine” (Brachos 40a);
 It is impossible to serve God with silliness, irreverence, and drunkenness. (Rambam, Hilchos Yom Tov 6:20).

The real issue is Purim, on which many people think we’re supposed to overindulge in alcohol. They cite the famous statement of Rava in the Talmud (Megillah 7b) that one should drink on Purim until one can’t tell the difference between “cursed is Haman” and “blessed is Mordechai.” That’s pretty drunk! But consider the incident that’s recounted immediately after:

One year, Rabbah hosted Rav Zeira for the Purim meal. They overdid the drinking and Rabbah got so drunk that he cut Rav Zeira’s throat, mortally wounding him. Rabbah prayed and Rav Zeira recuperated. The following year, Rabbah asked Rav Zeira if he would like to join him for Purim again. Rav Zeira wisely declined. When Rabbah asked why, Rav Zeira responded, “One cannot rely on a miracle happening a second time.”

What an odd story! And why is it recounted at this particular point in the Talmud? Some opinions (such as the Ran) say that this story is brought specifically to refute Rava’s opinion about drinking to excess on Purim. The Maharsha explains that Rabbah did not literally slit Rav Zeira’s throat. Rather, he kept plying Rav Zeira with drinks, which can be just as dangerous as a metaphorical knife to the throat. Rav Zeira’s refusal to return the following year was to avoid an environment conducive to overindulgence, a potentially fatal situation. (In modern terms, this would be comparable to getting behind the wheel after a few drinks.) Rav Zeira’s last word on the subject may be the best advice: If you’re going to be entering a potentially dangerous situation, then don’t go there!

It should be noted that the “obligation” to drink on Purim (assuming there is one) is only fulfilled with wine. The same is true of the four cups on Passover. There is no concept of ever needing to drink vodka, whiskey or beer; similarly, there’s no obligation whatsoever to drink on Simchas Torah. Are these things permitted? Yes. But there’s no excuse to indulge to excess.

Don’t get me wrong: I’m not a teetotaler and I’m not calling for prohibition. There are, however, many valid reasons one might want not to drink, including knowing that one has a problem stopping when he’s had enough. We have a Torah obligation to protect our lives and our health, so who could object if someone chooses to refrain from an addictive substance that impairs judgment? We also have a Torah obligation to follow to the laws of the land; it is therefore prohibited to serve alcohol to minors – even on Purim! Furthermore, we are forbidden to daven while under the influence of alcohol; if one does so, his prayer is considered an “abomination” (Talmud Eiruvin 64a).

The nazir (“nazirite” in English, as if that helps) is a person who takes an oath to refrain from various things for a set period of time. Upon the completion of his term, the nazir must bring a number of sacrifices, including a sin offering. The question is asked: what sin did the nazir commit that he must bring a sin offering? One answer is that he deprived himself of the good things that God gave us to enjoy. The Ramban (Nachmanides) disagrees; he maintains that the nazir’s sin is returning to a life of mundanity.

So which is it? Is it sinful to abstain from wine or sinful to indulge? In the words of the famous taco commercial, “Why not both?”

God gave us wine (and beer and schnapps, etc.) and He permitted us to drink them. Optimally, one should enjoy the good things God has given us – in proper moderation. But it’s also important to know yourself. If you’re going to become abusive, wallow in your own filth, embarrass yourself, endanger yourself or others, or make yourself “abominable” in front of God… well, in such cases, it’s probably better that you abstain.

This Woman Was Searching For Lost Relatives, Instead She Found Cancer

What If Orthodox Jews Got A Seat In The Writer's Room?