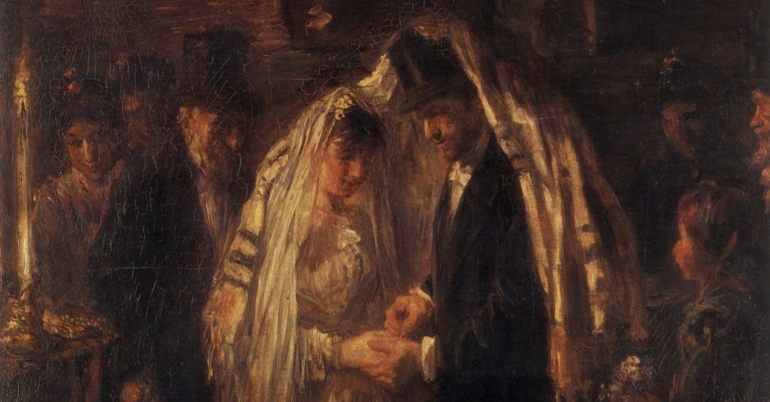 Do Men Take Ownership Of Their Wives During Jewish Weddings?

What’s with the business of a man being “koneh” a woman and the way the girl’s father gives ownership to the husband with the kerchief at the wedding?

The first thing to know is that words don’t mean the same thing in all times, places and cultures. “Nice” used to mean silly or foolish; “naughty” used to mean evil or immoral; “awful” used to mean deserving of awe. A British girl I know was once appalled when she heard that Orthodox women don’t wear pants. This was because what we call “pants,” they call “trousers.” To her, “pants” meant underwear! So when you hear that a man “acquires” a woman, you think like a piece of property but such is not the case. That’s like assuming that to deliver a baby requires the input of FedEx or UPS. Words can mean different things.

Clearly “to acquire as a wife” is not the same as “to acquire property.” I can sell my property, or give it away. I can’t do that with my wife. Compare the laws of a husband and wife with those of a master and servant – they’re completely different.

Now, a perfectly fair question is why the man “acquires” the woman as a wife but she doesn’t “acquire” him as a husband in return. The answer is “polygamy.” A woman is only allowed one husband so she is “acquired” by her husband but a man – at least under Biblical law – is permitted more than one wife, so he’s not “acquired” by her.

The reason polygamy is permitted but polyandry (more than one husband) isn’t is simple. Polygamy was permitted to avoid shidduch crises. If Israel went to war and 400,000 men were killed, there would be a terrible shortage of eligible bachelors. Allowing polygamy prevented that. Polyandry is prohibited because we need to know who a baby’s father is. If women had multiple husbands, it would mess up many important mitzvos, from inheritance law to not marrying your sister. Prohibiting polyandry prevents that. (It should be noted that polygamy was always discouraged and is no longer practiced, so this matter has little practical impact for anyone reading this.)

I think you’re confused about the handkerchief. That’s called a kinyan sudar and it has nothing to do with “giving the bride away.” It’s actually part of executing a contract. (You make a kinyan sudar when you empower your rabbi to sell your chometz for you.) When the groom accepts the conditions of the kesubah (which protects the bride’s rights!), he takes a handkerchief from the rabbi as a sign of his consent.

Another kinyan sudar potentially takes place at the tna’im. This is where the two families agree to their respective responsibilities for the wedding. This used to be performed a year before the wedding but nowadays it’s usually performed during the “shmorg” and is pretty much symbolic. (Nobody ever called off a wedding in progress because they couldn’t reach an agreement – by that point, everything was already done!) The parties accepting the handkerchief at this point have even less to do with effecting marriage than the choson accepting it at the kesubah!