Orthodox Jewish All Star Bat-El Gatterer is the first Orthodox Jew to qualify for and compete in the Olympics. (See her All Star award acceptance video here and her video interview here.) Now, she is not only a role model to young Orthodox Jewish athletes, she helps coach the current Israeli Tae Kwon Do team, whose 19-year-old Abishag Semberg just won the bronze medal in Tokyo in the Women’s 49kg competition. Gatterer competed in Beijing in 2008, having qualified six months beforehand. “I finished in 3rd place in the European Olympic Championship in Turkey, [which qualified me to compete in] the Olympics.” 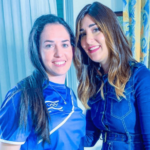 At that time, Gatterer did not know that she was the first Orthodox Jew to ever do that. “A little later, when articles were written about me, they mentioned it. It gave me a sense of pride and mission. Most of all, I wanted to show everyone that it is possible to be Jewish and religious and to go far in every field and also [specifically] in sports.”

When Gatterer was in Beijing, she wasn’t sure how she would handle Shabbat and Kosher. Thanks to the rabbi of the Chabad House in China, she was provided with fresh kosher meals every day. “It was just amazing. Usually I bring hot dishes from home and it is not always satisfying. Here, they provided me with home cooking. It was hot and delicious. It really helped me.”

While Chabad was incredibly helpful and she had the ability to qualify and compete without breaking Shabbos, not every sport is accommodated in the same way. Recently, the Tokyo Olympics were unable to accommodate table tennis champion Estee Ackerman’s qualifying match being moved from Shabbos. Additionally, Marathon runner Beatie Deutsch just missed qualifying, but had petitioned the International Olympic Committee (IOC) to change her competition from Shabbos and was denied. With Muslim Ramadan Fasting having been accommodated, the treatment of Orthodox Jewish Olympians is still in question. Gatterer knows that the topic is likely tricky for the IOC to manage. “The percentage of Jews and religious people in particular is so small and striving for zero that there is no chance that such a large body as the Olympics will start to consider every athlete no matter what the circumstances. Of course we do want that to happen but I doubt it will ever happen.”

That being said, the outlook for Orthodox Jews in Sports in general is having a renaissance. With Jacob Steinmetz and Elie Kligman having just been drafted to Major League Baseball, the worldwide pride amongst other Orthodox Jewish Athletes is unprecedented. Gatterer is thrilled for the good news. “Of course I heard! They also wrote an article about them in a newspaper in Israel. Cool and exciting. It sure opens doors in the future for more young religious athletes who want to engage in professional baseball.”

In light of the headlines surrounding Simone Biles’ stepping out of the Tokyo Olympics’ Gymnastics competition for her mental health, Gatterer acknowledges the incredible stress that young athletes, and in particular Olympians, are under. “What helped me deal with the stress was that I knew I had very great support from my family and my coach who believed in me.” Gatterer also took solace in the fact that she was not alone. “I realized that everyone is stressed, and that a person should know how to enjoy and take the stress [of competition] as positively as possible.” Her heart goes out to Simone Biles during this time. “Simone Biles went through a lot of [difficult] personal things. Because she’s the best athlete there is, the whole world watches everything she does and it’s not easy.” Aside from the pressure of being the GOAT (greatest of all time), Biles endured abuse and has faced challenges above and beyond what most young people have to manage. “She had a very hard time with the postponement of the Olympics a year because of COVID-19, since she already wanted to [move on and re-]start her personal life. Here, she had to train for another year. That was not planned and that is part of what affected her.” 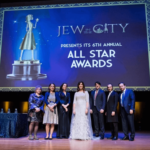 Gatterer is hopeful for the future of Orthodox Jews in Sports. “My message is that anything is possible! There is no such thing for me as not being a religious and professional athlete.” This is not just based on Gatterer’s personal experience though. “I see this already from other athletes who manage to combine [both being religious and dedication to their sport].” To young athletes who want to know the formula for Orthodox Jewish sports success, Gatterer’s advice is simple. “Believe, get help from your supportive family and do everything you can – you will succeed!”

Above all, Gatterer leaves the impression that while being a religious Jewish elite athlete isn’t an easy balance, it is attainable. For her, she wouldn’t have it any other way. “I am Jewish, religious and I am most proud and happy to represent the State of Israel, the people of Israel, and all the Jews in the world!”