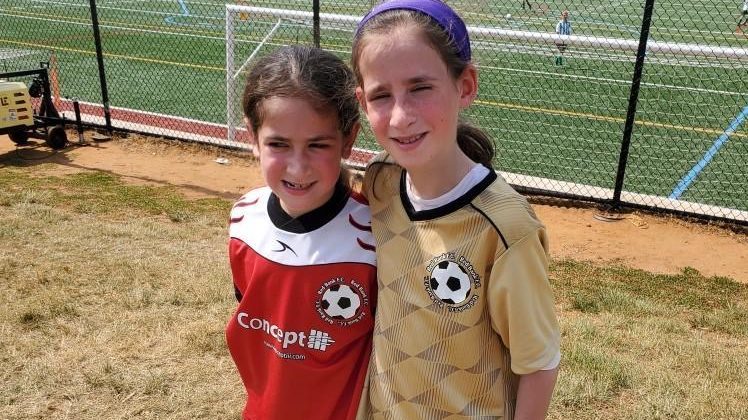 Avigail and Rosie Harrison are both soccer standouts on their youth travel teams. And not just because they’re among the better players on the field.

What sets them apart is “wearing skirts and not playing on Shabbos or any of the holidays,” says Rosie, age 11, “It’s a big kiddush Hashem.”

Her younger sister, Avigail, age 9, adds, “We play games every Sunday and practice every Tuesday and Thursday.”

A perfect schedule when you’re the daughters of an Orthodox Rabbi.

But what happens in the early fall, the height of soccer season and the Jewish holidays?

“All the girls on the team were finding out about Shemini Atzeret and Simchas Torah,” the Rabbi recalls with amusement.

To be clear, this is not a story about two religious girls who play soccer a hobby. Avigail and Rosie are the real deal in a very competitive league. And Rabbi Harrison and his wife, Hindy, are hardcore soccer parents.

“We almost never miss a game but usually need to split up so we can cover both games,”  says the Rabbi.  “The girls are stars in their teams, and we enjoy it a lot.”

They also cherish watching their daughters befriend the other players, most who aren’t Jewish, let alone had a frum teammate. Those friendships extend off the field too.

Case-in-point, a birthday party for one of Avigail’s teammates. Avigail had a terrific time even though she had to pass on the non-kosher pizza and cake.

“How do you do it?”  the mom of the birthday girl asked Hindy when she picked up Avigail.

“The mom was truly impresed and really shocked,” Hindy says “that a child can be so committed to the life they’re living.”

Mom and dad lead by example.  Both have advanced degrees and professional jobs.     Rabbi Harrison is a full-time lawyer and has been the Rabbi of Congregation Beth Shalom of Red Bank since 2010,

“I’m practicing both and loving every second of it,” he says. “I would never give it up. I have the dream job with six children.”

Hindy works with special needs children, assists at the law firm and helps take care of business and events at the shul.

Keep in mind, this is In Red Bank, New Jersey of all places. An amazing little city but not exactly a beacon of Orthodox Judaism.

To that the Rabbi points to his own Bar Mitzvah Parsah, –Vayeishev. “Yosef was known as Yosef HaTazddik, he was incredible,” The Rabbi says, “Yosef was really in the world, running Egypt, doing everything on a worldly basis but that didn’t detract from what he did in his religion life.  He excelled in both. That’s what we try to impart on the people in our shul and our community and certainly our children as well. They’re both doing great job.”

Adds Hindy, “They are admired… Such great players and so respected.”