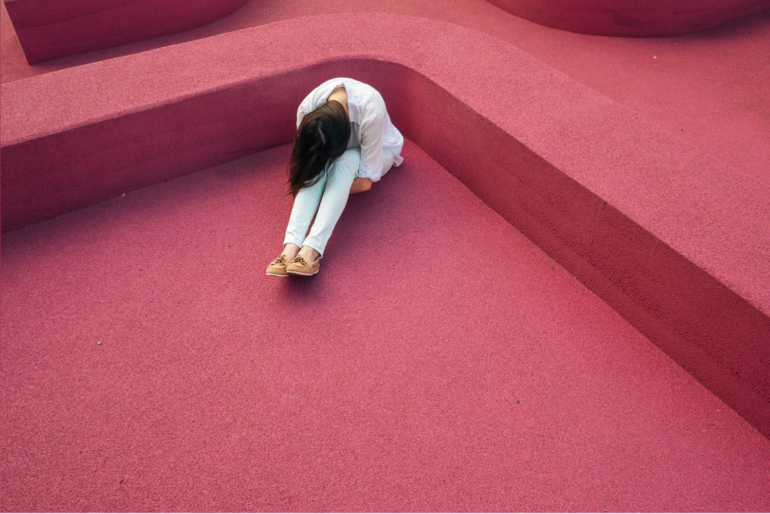 With 1500 Rockets Raining Down On Israel And So Many Vile Lies Online, I Feel Small

In the last 3 days, the terrorist organization, Hamas, has fired over 1000 missiles into civilian communities throughout Israel. Supporters of Hamas (and they include the people who say, “I don’t support Hamas, but…”) would have you believe this is just about Jews “evicting” Arabs from their homes and Arabs not liking that. But there are a lot of lies being spewed right now, and it’s important to know the facts. Jonathan Tobin explains in the NYPost that this assault of rockets is a distraction from a lawsuit about to be ruled on:

The lawsuit involves Arabs who have been squatting in homes from which Jordanian forces evicted Jewish residents in 1948 when they invaded and sought to destroy the newborn Jewish state. Since the city’s reunification in the 1967 Six Day War, Jews have sought to reclaim property in which Arabs have been living for years without ownership rights or paying rent. With Israel’s Supreme Court about to give a final ruling on the case, Palestinians are trying to ramp up pressure to prevent the squatters from being evicted — by threatening to make the optics bad and by providing a pretext for Palestinians to engage in violence. 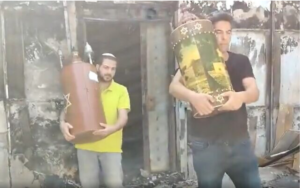 If this was only about a housing dispute, and not Jew hatred, synagogues in Lod and Ramle would not have been burned to the ground, sifrei Torah desecrated, prayer books destroyed. Israeli officials are describing what went down in this cities over the last two days as a “Kristallnacht.”

If it was only about eviction, and not Jew hatred, The Onion, would not have dared to publish an article whe 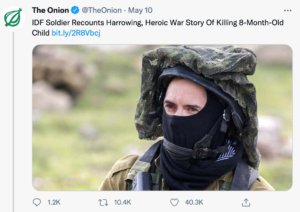 re an Israeli soldier “recounts his harro-wing, heroic war story of killing an 8-month old Palestinian child.” We have seen accusations of Jews being blood-thirsty, gentile child murderers before. The pro-Hamas supporters may claim this is about land, but when you paint the Jewish nation as savage killers, when our military exists only as the Israeli DEFENSE Force, there is Jew hatred going on.

And when Twitter users in New York incite their followers to “find targets nearby”  (remember – this is New York – not Israel) and tell them to “act,” 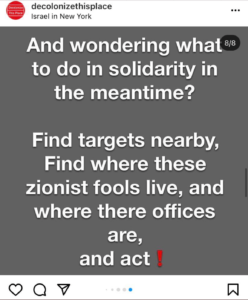 it is pretty clear that there is Jew hatred going on. In fact, today, in the middle of Manhattan, an Orthodox Jew in broad day light was almost lynched by a pro-Palestinian mob.

With all of these updates in the news and more from my family in Israel, I have been feeling beside myself for the last couple days. But then I saw the response to Gal Gadot’s Twitter statement. She said that her people (and her neighbors!) have a right to live in peace and security. She said nothing controversial or wrong in anyway. But the anti-semitic comments started pouring in. Jews were called “genocidal,” ethnic cleansers, child murderers. More and more and more appeared in my Twitter search. And for a moment I felt overwhelmed.

No matter how much we try to fight the lies and disseminate truth, we are so small.

There are so many more of them.

We are so few in the world, and we have so many enemies.

As I thought these words, I realized that I was talking like the meraglim, the spies who were sent to the land of Israel during the forty years the Jews were in the dessert, in order to scope out the land and report back. Instead of coming back to say what a wonderful land they had seen, the spies got nervous. They brought back the fruits and vegetables which were all giant. They said:

The land we explored devours those living in it. All the people we saw there were of great size. We saw giants. We seemed like grasshoppers in our own eyes, and we looked the same to them. — Numbers, 13:31-33

For a brief moment, I felt a pang of despair, and like the spies, I felt hopeless. But then I remembered how the Talmud discusses the nature of the sin of the spies, and I was comforted:

The spies’ sin wasn’t feeling that they were personally small, it was that they didn’t feel the power of the Almighty at their side. Why should I feel insignificant and full of despair when we are the people who taught the world how a David could beat a Goliath?

No wonder David, the Psalmist, proclaimed, “the guardian of Israel neither slumbers nor sleeps!”

What is impossible with Hashem on our side?