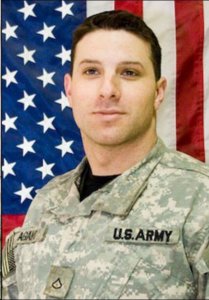 When Orthodox Jewish U.S. Army Specialist Daniel Agami was killed by an improvised IED in Iraq, he was posthumously awarded the Purple Heart among several other honors, and his parents earned the designation of being Gold Star Parents. Despite this bittersweet distinction, his mother Beth Agami’s deep faith in Hashem has allowed her journey to develop from that of mourning mother to becoming a beacon of inspiration. She says, “It’s been one heck of a journey…Everyday you’re going to think about him and never forget the sacrifice [that he made.]”

The Agamis had a very traditional, semi-observant household and Daniel identified himself as being Orthodox. In their South Florida community, Daniel was always involved in community events. “He was a Jewish-oriented person, did NCSY, and always kept the faith. It was very important to him.” He attended Stoneman Douglas (the site of the Parkland Massacre) but left to go to college early. The events of 9/11 convinced him to enlist in the U.S. Army. His father had served in the IDF and his maternal grandfather was in the Navy during the Korean War. “We were very proud of his decision. It was something that he really wanted to do so we were behind him.” The Agamis supported Daniel, as he explored his main area of concern: “How do you stay Jewish in the military?” 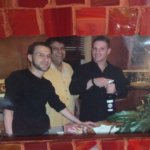 At the time of his enlisting, Kosher Troops and the Alef Institute did not exist in the same way they do now. “When he was in basic training at Fort Benning, [he didn’t have] access to kosher food.” But the Agamis didn’t worry as they knew Daniel was doing his best. “One day he was standing in line in the mess [hall], his commander asked him, ‘Why aren’t you getting any food?’ Daniel said, ‘I really eat only kosher.’ The man said, ‘Let me see what I can do.’ The Sergeant got him a plate of fruit and vegetables. We were very impressed by that news.” Even on the front lines, he predominantly lived on protein drinks. “He was extremely health conscious and it was very important for him to maintain kashrut.”

As Daniel served in Germany and then in Iraq, his brothers in arms made fun of him in a loving way. He was nicknamed “The Hebrew Hammer” and “G.I. Jew.” But “Daniel made light of it and everybody loved him.” Once, he encountered Anti-Semitism that was a bit stronger than these lighthearted instances. “He put that guy in his place and never had an incident after that.” In a poignant twist, the soldiers used to hang flags of the countries their ancestors came from over their beds. Daniel hung an Israeli flag over his bed, even in Germany at their formerly Nazi Military Base barracks. Daniel was very well liked by the chaplains because he biblical knowledge to have theological conversations with them. “Daniel really enjoyed that a lot.” This inspired him to eventually want to become an army chaplain. 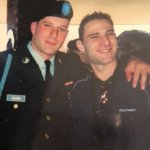 Before Daniel left for Europe and Iraq, he had access to more Jewish opportunities. “They allowed him to leave base for Rosh Hashana and Yom Kippur. Rabbi Lipsker of Chabad Emory drove 2 hours every Sunday to teach a class for Jewish soldiers with bagels and lox and cream cheese and it was Daniel’s favorite day of the week.” Poignantly, Daniel was able to return home for Pesach in the Spring of 2006. It was the last time he saw his family. Even when he got to Iraq, he was always Jewishly connected. “He always had his tallis and tefillin and when they recovered his body he had his tehillim and the mezuzah that he wore around his neck.”

Daniel was one of a few Jewish soldiers choppered in to Baghdad to Sadaam Hussein’s palace for a Menorah lighting. Bill O’Reilly of Fox News was there signing his new book “The Culture Warrior” and Daniel was pulled out of the line to be interviewed. “He never got to get a book signed, but I sent an email to Bill O’Reilly directly and he mailed us an autographed book with an invitation for Daniel and our family to meet him at the Fox Studios in NYC. Daniel never made it there, but Bill invited my husband and I to meet him. We got a tour of the studios and he made an incredibly generous donation to The Hebrew Academy of Margate in Daniel’s memory,” Beth Agami explains. The Agamis also were greeted by then-President George W. Bush at the White House, in tribute to Daniel. 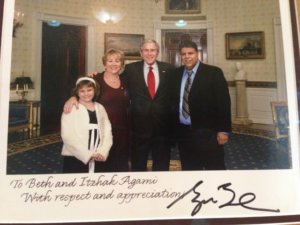 There was hashgacha pratis in how Daniel died as well, according to Beth. “He was with four other soldiers and 1 Iraqi interpreter in a Bradley tank. They were all killed by an IED. [The explosion] was so massive that the tank went under the ground. Because Daniel was ‘caged’ as the driver, he was intact.” Had he not been the driver, he would not have been easily found. “They were able to recover him quickly because of this miracle, he was able to get back for a timely burial.” While the Agamis had an option to bury Daniel at Arlington, he had requested that he be buried at a Jewish cemetery near their home. “Thank God he told us.” They brought him back on a private jet with Colonel Rabbi Goldstein, ret. “It was the biggest funeral that was ever held at that cemetery. It made the news around the world. The ambassador from the Miami consulate came. It was extremely rare for a Jewish fallen soldier on the front lines, especially so as an observant Jew.” The funeral was a combination of Jewish and military tradition. “We did an 18 gun salute instead of the 21 gun salute. I was handed the folded flag when they did the 18 gun salute. Someone had picked up the [spent] bullets and put them inside the flag. One was in the shape of the Star of David. It was just too much. I took the bullet and made it into a necklace to wear on Memorial Day.”

While the dreaded image of the soldiers in Class A uniforms arriving at a family’s door is a parent’s worst nightmare, the Agamis were consoled by the fact that their son Ilan had gotten married 10 days before Daniel’s death. “It was a rollercoaster of emotions. Ilan and his wife were on a cruise ship when they got the news. They [alighted] the ship immediately and came home immediately and we all got prepared for the funeral.” The hand of Hashem is clear in the Agamis’ lives in their journey with their daughter Shaina as well. Having survived a life-threatening illness in high school, she transferred to homeschool the week before the Parkland Massacre. “She knew every one of those kids who died. A lot of them were Jewish. The teachers that she saw every day were killed.” After so much tragedy in her young life, Shaina went to Beer Miriam and is now thriving in college.

Every year, Beth is requested to speak around Daniel’s yahrzeit and on Memorial Day. Her message is both hopeful and blunt: “If you don’t have the faith you’re screwed! [But honestly,] where [else is a person supposed to] go with this?” She has connected with other Gold Star parents, only to realize that her situation is unique. “It’s very hard to be the [only] Jewish person in all of this. But we have our own way of dealing with it and this is what it is.” Beth is practical and positive in her outlook, “We just always try to look forward. There’s nothing I can do to fix this, we can’t bring him back. But we know that Hashem needed him on that day, and that’s it. That was going to be his day no matter what, whether he was in Iraq or in Florida.” This is the key to her strength. “I cannot continue on with my life and bring the people around me down. Other Gold Star families, this is all that their lives are about. There is no way that Daniel would ever want me to be that way. He would want us to live and I would be doing him a disservice if I didn’t do that with my life. All I can do is try to inspire other people.” She is grateful for every moment she had with Daniel and tries to impart the same feeling to others. “Think about the good times. Without that you’re doomed.”

Beth sees so many good things that have come out of Daniel’s passing. Shaina raised $10,000 for the Alef Institute for her bat mitzvah by selling camouflage “Kombaticahs” military-style kippahs as Daniel called them. “Alef gave her a beautiful plaque.” In another stunning tribute, Ilan’s son, named Daniel for his late uncle, is being bar mitzvahed this year. “We need to remember him. There isn’t a day that goes by that you don’t. It’s our lifelong handicap.”

Daniel’s Class A U.S. Army uniform is on permanent display at the National Museum of American Jewish Military History (NMAJMH) in Washington, DC. May his memory forever be a blessing.