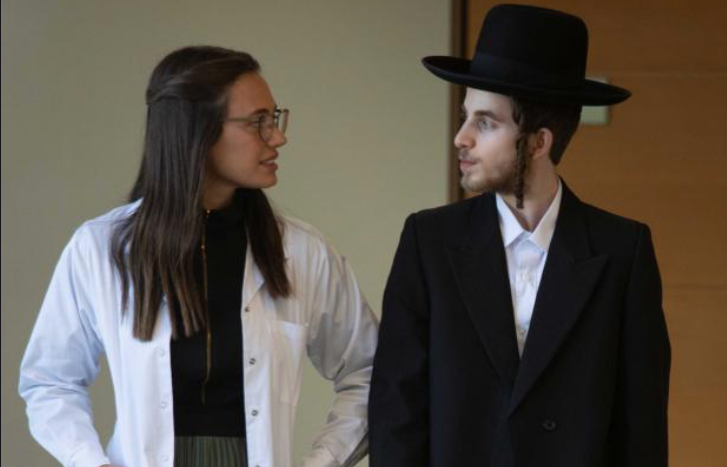 Growing up not religious, I distinctly remember noticing Orthodox Jews passing by on the streets of New York City with seemingly no emotions. I saw men walking quickly and not smiling and women pushing strollers filled with children, and not smiling. I simply assumed they didn’t smile, laugh, feel, or have emotions like the rest of us do.

When we see Orthodox Jews depicted in fictional media, we rarely see them smile. We never see their hearts sing or watch them fall in love. But Episode 1 and 3 of Season 3 of Shtisel showed us young Yossele falling in love not once, but twice. When those events happen in such close proximity to one another, this is what we call a “yeshiva bochur love triangle” – something that we have never seen on TV before, yet something that is very relatable and human.

In Season 3, Episode 3 of Shtisel, Yossele has still not be able to fully reconnect with the original Shira, Shira Levi, who he accidentally went on a date with in the first episode. (He sat at the wrong table and spent an evening with Shira Levi, who was also going on a blind date, instead of meeting Shira Levenson, who thought he stood her up. Whatever happened to the boy Shira Levi was supposed to meet? ) Shira and Yossele met “by chance” at the Western Wall, and Yossele gave Shira his yeshiva pay phone number to call, but every time Yossele comes to the phone, Shira Levi hangs up.

In Episode 3, because Yossele’s controlling mother, Giti, has made sure Yossele won’t move forward with Shira Levi and insists he meet the original Shira, the date finally occurs. And while we think that nothing can match the spark that Yossele and Shira Levi had, we’re delighted to see that Yossele and Shira Levenson are clicking. The spark, the chemistry, the attraction – it’s all there. Tragic stories, where parents pressure their children to marry someone who they are not interested in (going against Jewish law) unfortunately happen in some parts of the charedi world and we have seen these stories at Makom.

But that is not the case in this episode. No, here we see a young woman and man excited about each other, happy to spend time together and telling their parents they want to move forward. This is wonderful and refreshing to see happy Haredi Jews. But then Shira Levi comes back into the picture. She calls one more time after Yossele’s engagement and this time, when he gets to the phone, she finds the courage to not hang up.

Now Yossele is faced with a difficult decision. By the end of the episode, we don’t know what will happen. We know his mother is trying to control him, we know his father is trying to keep his controlling mother at bay, and we sense that Yossele has enough self-confidence to know that he will not live his life for someone else. So while the episode leaves us on a cliffhanger, I had a hopeful feeling as it ended. Yossele will only marry the woman he loves and he won’t let anyone stop him.