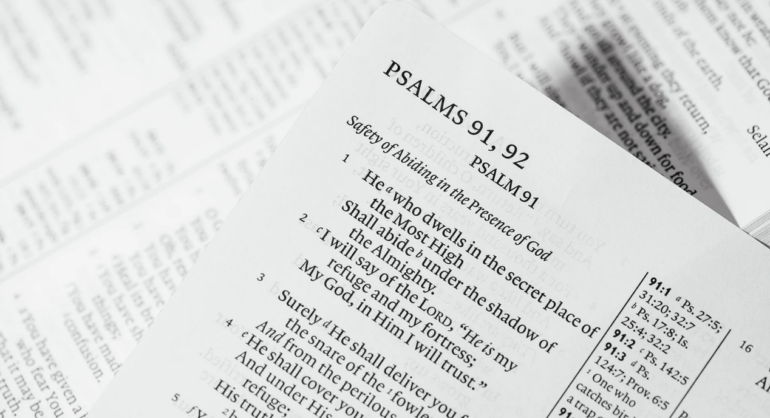 Am I allowed to watch content created for Christian audiences i.e., show my kids Veggie Tales? What about purchasing decor with Bible quotes that say “Psalms 20:5” underneath or “Let Go and Let God,” etc.? Some of this is clearly from Torah, but is there a problem with consuming these products?

Thanks for your question. Let me share two stories, one real and one hypothetical, both involving waiting rooms.

When I was a child, I was in a waiting room and there was a book of Bible stories for children. I was familiar with such books, even owning a few, so I cracked it open. It started as such things tend to do, with the Garden of Eden. But this telling was different from the ones with which I was familiar. After Adam and Eve ate the fruit of the Tree of Knowledge and God pronounced their punishments, the book said something along the lines of “It was then that God promised to send His son to redeem mankind.” I was only in second or third grade but I had a pretty decent Jewish upbringing and I knew that that wasn’t quite right. Not everyone, however, would know that this detail isn’t in the story the way that we tell it.

Now, you might think that this book is an anomaly and that normative Christian sources wouldn’t insert Jesus into the Garden of Eden, so I did a little research. Apparently, the source for this assertion is a rather liberal interpretation of Genesis 3:15. Speaking to the serpent that tempted Eve, God says, “I will put enmity between you and the woman, and between your descendant and her descendant. He will bruise your head, and you will bruise his heel.” One online source referred to this verse as “The first great statement of the Gospel” in that is contains “God’s first promise of a redeemer.”

According to this source, “The words contained in Genesis 3:15 (and also in the previous verse) constitute the first gospel sermon ever preached. The preacher was the Lord God Almighty, and the audience was the Devil, Adam and Eve….” He goes on to infer from this verse “seven great fundamental truths,” including the idea of a virgin birth (since the verse says “her descendant,” i.e., descended only from a woman) and the second coming of Jesus (in which he will vanquish Satan, represented by the serpent). This is an interpretation lacking any precedent in our Oral Tradition and I suspect that it never occurred to any Jewish reader.

Another online source laments that the Latin Vulgate makes “an unfortunate translation” in Genesis 3:15. The pronoun there is changed from masculine to feminine (i.e., “she will bruise”). This translation gives “wrongful support” to the idea that the verse refers to Mary, an idea that the author asserts has no basis in Scripture. Ironically, this is exactly what Jews say about the assertion that this verse refers to Jesus!

Lest the insertion of Jesus into a seemingly unrelated text surprise Jewish readers, still another online source maintains that, “The central figure in the Old Testament, though not mentioned by name, is Jesus Christ.” This is the Christian perspective, with the result that references to Jesus can pop up in “Old Testament” stories where Jewish readers would not expect them.

This brings us to story #2. When I was in high school or college, I asked a rabbi a hypothetical question about a King James Bible in a waiting room. (I was probably inspired by my earlier, real-life story.) Basically, is reading the “Old Testament” portion from the KJV preferable to picking up Time magazine or Popular Mechanics? He wasn’t a fan of the idea.

I would subsequently become aware of the vast number of mistranslations in the text, most of which are not nearly as well known as the long-debunked “a virgin will conceive” in Isaiah 7:14 and other verses popular with missionaries. For example, in Genesis 1:2, the words “ruach Elokim” are understood by Rashi, Onkelos, the Midrash Rabbah, the Gemara and more as a literal wind sent by God. The King James Version, however, translates it as “the Spirit of God,” with a capital S, referring to the third personage of the Trinity.

Similarly, Psalms 2:12 reads “nashku bar pen ye’enaf.” The exact meaning of the Hebrew is unclear but translations include, “Pay homage in good faith lest He be angry” and “Arm yourselves with purity lest He be angry.” The King James Version translates it “Kiss the Son, lest he be angry” – requiring that the word “bar” be an Aramaic word in Psalms for no apparent reason, and again with a capital S to indicate divinity.

Some changes are quite simple. For example, Exodus 20:13 says “Do not murder.” The King James Version renders it “Thou shalt not kill.” This seemingly minor change leads to some very significant ramifications in matters of law. (A boy from an interfaith marriage being raised Lutheran once asked me how it was permitted to serve in the army in light of the prohibition against killing. His pastor was unable to reconcile the discrepancy. I told him that the distinction between “killing” and “murdering” is quite clear in the original Hebrew.)

Here’s an actual missionary verse: lamenting his persecution by his enemies, King David writes, “Dogs surround me; a pack of evil ones closes in on me like lions at my hands and feet” (Psalms 22:17). The King James Version changes this autobiographical psalm to a messianic prophecy by translating it, “For dogs have surrounded me; the assembly of the wicked have encircled me, they pierced my hands and feet.”

My point is that things that ostensibly tell Jewish stories do not necessarily represent Jewish positions. They’re filtered through 2,000 years of Christian theology, which reverse-engineers into things like Bible stories for children. Which brings us to Veggie Tales.

I haven’t seen a lot of Veggie Tales; I’m mostly familiar with the flap surrounding the infamous “Bunny Song.” However, it’s unabashedly Christian and even “Old Testament” stories are likely to reflect that perspective, as we have seen. (As an aside, a check of the Veggie Tales wiki shows that Jesus appears or is mentioned by name in at least ten episodes.)

As far as purchasing décor with Bible verses or religious themes, I would have to say that it’s a case-by-case basis kind of thing. Is the verse translated properly? If the religious theme consistent with Jewish thought? (I’d have to say that “WWJD?” is not.) And finally, something you may not have thought about: who gets the money? Buying a plaque with a verse from Psalms might be one thing if you’re supporting a struggling artist working from her kitchen; it could be quite another if you’re financing an organization that actively attempts to proselytize Jews to Christianity.

I’m not saying that you can’t find usable material in Veggie Tales or elsewhere but it will require that a parent vet the content in advance and be familiar enough with the authentic Jewish perspectives to know divergences on sight. That’s probably a little more legwork than most people would be willing to invest.

The Talmud in Chulin (109b) tells us that for everything prohibited there’s a permitted equivalent. While they may not be as well known, there are plenty of Jewish videos for kids, as well as music and home décor. It might be a lot easier to check out one’s local online Judaica store and simply shop for things that one knows to be in line with our own theology.