Is It Okay to Do Nothing in the Midst of Someone Else’s Fight?

The other day, my five-year-old responded to a mention of “doing nothing” by pointing out that it’s impossible to do nothing; everyone is always doing something.

In fact, all four of my kids have had a similar eureka moment at some point in their lives. It might be related to attempts to grasp the notion of divine omnipresence: Before settling into the fact that a human mind simply can’t comprehend G-d being “everywhere,” each child goes through a phase of concern that if they so much as lift a hand, they’ll be hitting G-d. So they try to do nothing – but quickly realize that no one can do nothing. “You’re not doing nothing! You’re breathing!”

On this occasion, my daughter’s example wasn’t literally accurate, but was metaphorically quite insightful: “Everyone is always standing!”

Actually, right now I’m sitting. (And breathing, and typing…) But she has a point. As highlighted in the Torah portion to be read this Shabbos in the diaspora (it was read last week in Israel), we are all, always, taking a stand – even when we’re not.

The parsha opens with Korach’s rebellion: He gets together with Datan and Aviram and others to challenge Moshe’s leadership. The details of their cause are the subject of much discussion, as it seems those involved in the uprising had different and even conflicting motives (as described by Malbim and others), but essentially they claimed that others besides Moshe’s own brother should be able to serve as priests. After answering Moshe’s challenge to try bringing incense, if they believe they’re suited for priestly tasks, they were put down dramatically and miraculously.

The miraculous drama involved should make it pretty clear who were the good guys and who were the bad guys, yet some uncertainty remains. What did the rest of the nation think? Were they swayed by Korach’s arguments, or did they stand firmly behind Moshe against these upstarts?

Is there a middle ground?

If we read carefully, it seems that some people may have thought there could be a middle ground, but that they were mistaken.

Right around that fateful bringing of incense, we are told that Korach “assembled all the congregation against them [i.e. Moshe and Aharon]” (Numbers 16:19).

Once they are gathered, God instructs Moshe and Aharon to “separate yourselves from among this congregation, that I may consume them in a moment” (ibid. 21). From whom, though, are they to separate – and why? Is it only from the rebels that they are to separate, or does “this congregation” refer to the nation as a whole; were they all guilty?

According to several commentators, they were indeed all guilty – because of where they did, or didn’t, stand.

Rav Hirsch, for instance, suggests that simply standing there – having come to stand there – was a guilty act. Just prior to the divine warning in verse 21, Korach gathered all the congregation, and more specifically, he assembled them against Moshe and Aharon (ibid. 19). Rav Hirsch argues that the verse implies Korach brought them not just to see what G-d would do, but “to enforce his will and achieve his purpose by sheer force of numbers. … those that came were accordingly on Korach’s side.”

In this view, there was a mass of people who had taken an active stand with Korach, and they deserved to be punished with him.

Others, however, suggest the rest of the nation had not taken any definitive step towards Korach’s side – and yet – they are the guilty “congregation” threatened with destruction in verse 21.

Abarbanel, for instance, believes that others of the nation were “just” standing there – and by just standing there, he means they weren’t protesting as they could and should have. “When the Holy One, blessed be He, saw all the congregation of Israel there, and that not one of them protested [what Korach and his followers were doing], as if they desired the matter, He said to Moshe and Aharon, ‘Why do you need this trial? Separate from this congregation – the congregation of the Children of Israel – and I will destroy them, and you will not need any other specific trial.”

Abarbanel’s portrayal calls to mind that stereotypical schoolyard scene where two kids start going at it and others form a circle egging them on. “Fight! Fight!” The onlookers might not consider themselves to be really involved, and might not care who wins, but they find the whole thing exciting and entertaining. They stand there “as if they desired the matter.” For that reason, Abarbanel argues, it would be entirely within the realm of “justice and righteousness” for G-d to destroy them all. “All Israel who were sitting there deserved death just like Korach and his group, because they were gathering to see the sin and not protesting it.”

They might have thought they were just “sitting there,” but by sitting still, they were taking a stand.

Rav Hirsch and Abarbanel differ in their understandings of the degree to which the nation as a whole was active in support of Korach, and this difference raises important questions about the line between passivity and action. What is our responsibility when we see others engaged in wrongdoing? Is it enough to not engage; does guilt begin only when we actively join the wrongdoing, as Rav Hirsch describes in the case of Korach? Or are we held accountable when we don’t act, for every moment that we could have protested but didn’t?

(Of course, it’s not always the case that we “could” protest. The ancient Rabbis were well aware of the inherent risks involved in the command to “rebuke your fellow” (Leviticus 19:17), ranging from simple uselessness to counterproductivity and worse. (See, for instance, Arachin 16b.) But the divine condemnation of the entire “congregation” of Israel in the matter of Korach indicates that this was one of those cases where they could have protested. Alas, we don’t often get divine hints, and are left doing our best to honestly assess each situation to figure out whether and how we might be able to take a stand.)

Like my daughter pointed out, wherever we are, whatever else we are doing, we are standing. We are taking a stand, even if only by not taking a different stand.

The Torah goes on to tell us that Moshe and Aharon took a stand of their own, arguing on behalf of the people.

“G-d of the spirits of all flesh! Shall one man sin and You will become angry at the entire congregation?” (ibid. 22)

G-d, You know the true spirit within each body of flesh and blood. Is it really the case that the followers are as culpable as the instigators? (Ramban, Rav Hirsch) Could it be that there are those among them who came not out of a lack of faith, but because they wanted to witness Your awesome retribution against the rebels? (Abarbanel) Once they see how You deal with Korach himself, any doubts they might have will be erased! (Ramban)

G-d doesn’t destroy the nation, so it seems He accepted their argument(s). (Perhaps, as Rav Hirsch implies, He threatened this deserved destruction with the intent of eliciting such a prayer.)

But there is a caveat: Those whose defense rests on the claim that they haven’t truly done anything wrong can save themselves by doing something now. “Speak to the congregation, saying, Get up from around the dwelling of Korach, Datan, and Aviram” (ibid. 24).

If the initial reaction to Korach’s rebellion was one of idle curiosity, if they didn’t really mean to support Korach but got swept up in the excitement, there is hope – but they have to stop waffling.

The real test of the spectators’ guilt comes now, when they are specifically called upon to demonstrate their opposition to the rebels at the center of the spectacle.

They might argue that passively observing doesn’t indicate agreement, but when called to action, even if the action is simply stepping away – that’s when passively remaining there can no longer be defended, but becomes an active choice.

Of course, active choices can be quite difficult; it’s much easier to see how a conflict plays out, and then attach oneself to the winner. Midrashic tradition describes Avraham’s brother, Haran, waiting to see whether Avraham’s G-d would save him from Nimrod’s fiery furnace before declaring his own allegiance: “Haran was sitting and saying in his heart, If Avraham wins, I’m his; if Nimrod wins, I’m his” (Rashi on Genesis 11:28). We can see the logic, and apparent safety, in such an approach. Sitting around as a spectator, however, didn’t end so well for Haran: ”When Avraham was saved, they said to Haran, Whose are you? He said, I am Avraham’s! They threw him into the fiery furnace – and he was burned.”

Sometimes sitting and observing isn’t enough. Sometimes, one has to take a stand, even when it’s hard.

Nechama Leibowitz cites a line from Rabbi Moshe Alshich’s commentary that suggests Moshe acknowledged the challenge in taking such a stand. Alshich points out that while God instructed Moshe to tell the people “get up from around the dwelling of Korach, Datan, and Aviram,” Moshe relays the message in a softer voice: “Depart, na, from upon the tents of these wicked men…” (verse 26). The Hebrew word “na” can be translated as “now” or “please,” and perhaps both are intended here. As Nechama explains, “I am not asking now for you to “get up,” which is a great measure; rather, some [small] removal, or distancing.”

Even just a small step away from what’s wrong, towards what’s right, can make a difference.

At the very least, it’s a start. For now. 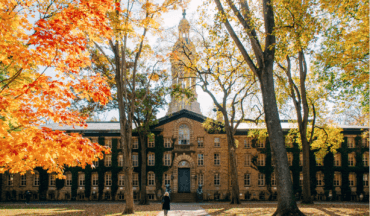 Does Judaism Believe In Judging Historical Figures In Their Time Or By Today's Standards?